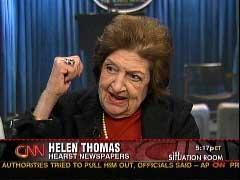 Longtime White House correspondent Helen Thomas has issued a statement of “deep regret” after telling an interviewer that Israeli Jews should “get the hell out of Palestine” and “go home” to Germany and Poland.

Thomas has been widely admired by the liberal establishment in the media. NBC’s Ann Curry, for example, last year saluted Thomas as “a woman who inspired me....I’ve tried to emulate her.” CBS’s Harry Smith has described her as “legendary,” adding: “What she does day after day after day, I’m not sure we value enough.”

Thomas has not been shy about expressing her left-wing views and reliably anti-Israel opinions since she became a White House “columnist” in 2000, after a lengthy career as UPI’s straight news White House correspondent. But a review shows Thomas was expressing solidly liberal opinions even as a supposedly neutral reporter:

Nearly twenty years ago, she dismissed the idea of liberal bias as nothing but compassion: “I don’t know what a liberal bias is. Do you mean we care about the poor, the sick, and the maimed? Do we care whether people are being shot every day on the streets of America? If that’s liberal, so be it.”

In 1993, she slammed Ronald Reagan as soulless: “A President should care about all people, and he didn’t, which is why I will always feel Reagan lacked soul.” But a few months after Bill Clinton left office in 2001, Thomas fawned: “The human spirit — to me and millions of others, President Clinton has always personified that. He is the man from Hope, and that is what he has given us, hope. We miss him.” And, a few months after 9/11, she ridiculously insisted that the security measures were worse than FDR’s internment of Japanese-Americans:  “The chipping away of our civil liberties is unprecedented. Even in World War II, I never saw anything like that.”

Here are some of her more legendary outbursts collected by the MRC over the years:

■ “I think he left an uncaring society....a government that was not as concerned.”
— UPI White House reporter Helen Thomas talking about Ronald Reagan on CBS News Nightwatch, December 30, 1988.

■ “All of us who covered the Reagans agreed that President Reagan was personable and charming, but I’m not so certain he was nice. It’s hard for me to think of anyone as nice when I hear him say ‘The homeless are homeless because they want to be homeless.’ To my mind, a President should care about all people, and he didn’t, which is why I will always feel Reagan lacked soul.”
— UPI White House reporter Helen Thomas in the July 1993 Good Housekeeping.

■ “A liberal bias? I don’t know what a liberal bias is. Do you mean we care about the poor, the sick, and the maimed? Do we care whether people are being shot every day on the streets of America? If that’s liberal, so be it. I think it’s everything that’s good in life — that we do care. And also for the solutions — we seek solutions and we do think that we are all responsible for what happens in this country.”
— UPI White House correspondent Helen Thomas on C-SPAN’s Journalists Roundtable, December 31, 1993.

■ Helen Thomas of Hearst Newspapers: “Why do you refuse to respect the wall between the church and state? And you know that the mixing of religion and government for centuries has to led slaughter. I mean, the very fact that our country has stood in good stead by having this separation. Why do you break it down?”
President Bush: “Helen, I strongly respect the separation of church and state.”
Thomas: “You wouldn’t have a religious office in the White House if you did.”
— Exchange during Bush’s first presidential news conference, February 22, 2001.

■ “Throughout the eight years that he was in office, President Clinton warned us that the next great menace was international terrorism....He also brought unprecedented prosperity to our nation, and because of that, President [Bush] can use the surplus Mr. Clinton left behind to pay for many of the nation’s needs in this time of crisis....This lecture series is about the human spirit. To me and millions of others, President Clinton has always personified that. He is the man from Hope, and that is what he has given us, hope. We miss him. Thank you, Mr. President.”
— Helen Thomas introducing Clinton at an October 9, 2001 event held by the Greater Washington Society of Association Executives.

■ “Ari, what makes the President — I’m taking note of his wide-swinging threats in speeches recently. What makes him think that he has the right to go into a sovereign country and bomb the people?”
— Hearst White House correspondent Helen Thomas questioning White House press secretary Ari Fleischer at Dec. 5, 2001 briefing shown live on cable news channels.

■ “President Reagan turned the country to the right. There was a Reagan revolution, a very conservative revolution, and it was social Darwinism. If you can’t make it, tough. I mean, he did not believe in social welfare and, but at the same time, he did build up our military. He had a secret plan to spend one trillion dollars on new arms when he came in....”
“Clinton, I think his heart was in the right place. He certainly built up a great prosperity and surplus, balanced the budget, I think that he had great ideals, but, of course, he tarnished the White House with his liaisons and, but eventually, you know, every President, time is the great healer, and every President looks better in retrospect, so I think that he has a legacy that will be worthwhile.”
— Hearst columnist Helen Thomas speaking at a March 3, 2002 Newseum session shown by C-SPAN on March 4, 2002.

■ “Ari, does the President think that the Palestinians have a right to resist 35 years of brutal military occupation and suppression?”
— Helen Thomas’s question to White House press secretary Ari Fleischer, April 1, 2002.

■ “I think the chipping away of our civil liberties is unprecedented. Even in World War II, I never saw anything like that in Washington or any of the wars. I think that people are standing mute, and I remember the rabbi in the March on Washington program. He said that the greatest sin of all in the Nazi era was silence. He had been in a concentration camp for many years. People have got to, they must speak up now or forever hold their peace.”
— Hearst White House columnist Helen Thomas on MSNBC’s Donahue, July 22, 2002.

■ “I censored myself for 50 years....Now I wake up and ask myself, ‘Who do I hate today?’...I have never covered a President who actually wanted to go to war. Bush’s policy of pre-emptive war is immoral — such a policy would legitimize Pearl Harbor. It’s as if they learned none of the lessons from Vietnam....Where is the outrage?”
— Hearst White House columnist Helen Thomas speaking at the Massachusetts Institute of Technology (MIT) on November 4, 2002 and quoted on MIT’s Web site two days later.

■ “Ari, you said that the President deplored the taking of innocent lives. Does that apply to all innocent lives in the world? And I have a follow-up....The follow-up is, why does he want to drop bombs on innocent Iraqis?”
— Thomas to press secretary Ari Fleischer during a January 6, 2003 White House briefing shown on all three cable news networks.

■ “The day I say Dick Cheney is going to run for President, I’ll kill myself. All we need is one more liar.”
— Hearst White House columnist Helen Thomas, as quoted in the “Under the Dome” column by Albert Eisele and Jeff Dufour in The Hill newspaper, July 28, 2005.

■ “Starting after 9/11, they [the Washington press corps] rolled over and played dead — they were so afraid of being called unpatriotic and un-American and they thought the American people were watching on television. They lost their guts and they did a lousy job.... We’ve killed people in torture. That’s not us — is it? Where is the outrage?”
— Former UPI White House reporter Helen Thomas in a Q&A with the liberal Center for American Progress and posted on the group’s Web site February 28, 2006.

■ “I’m a liberal, I was born a liberal, and I will be a liberal ’til the day I die.”
— Longtime UPI White House reporter Helen Thomas, now a columnist for Hearst newspapers, in a Q&A published in the Philadelphia Inquirer, November 5, 2006.

■ “[Ronald Reagan] was very, very likable and yet it was very impersonal. He definitely had an agenda, and it was a social Darwinism, ‘If you can’t make it, tough,’ was, you know, survival of the fittest, this is the whole approach.... He really did think that government was the problem and not the solution, which he said to the very end. At the same time, he, I think, he obviously was well liked, and I think that the poor did not prosper under him at all.”
“I think the Clintons had suffered a lot on the campaign trail ....Everything was under investigation constantly. They never, I don’t know how they stood it. The resilience of that family....I think that the Clintons suffered a lot.”
— Former UPI White House correspondent Helen Thomas on CNBC’s Tim Russert, June 9, 2007.

■ “He [Barack Obama] was a great gift to democracy in that it would show the American people were fair and balanced, and honorable, and understood [it] didn’t make any difference in terms of race, color, creed and so forth.”
— Helen Thomas explaining why she voted for Obama in an interview with Cox Newspaper reporter Ken Herman posted November 12, 2008 on the Fishbowl DC blog.