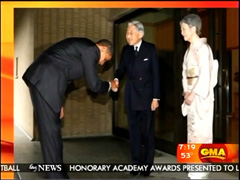 ABC’s Good Morning America finally picked up on the deep bow President Obama performed for the Emperor of Japan over the weekend. Co-host Diane Sawyer ran through how other U.S. Presidents have greeted either Emperor Akhito or his father, the late Emperor Hirohito over the years — some bowing, some not. Sawyer claimed that Americans are “not trained to greet royalty” and “it’s just too confusing.”

Actually, the government employs lots of experts on culture and protocol to make sure that our presidents are fully “trained” on what to do when they represent our government overseas — which is not to say that all of our presidents perform these duties flawlessly.

Missing from Sawyer’s run-down is a tidbit that ABC White House correspondent Jake Tapper posted on his “Political Punch” blog Sunday afternoon. Tapper said he received a note from an old friend whom he described as “an academic with expertise about the Japanese Empire, and in general a supporter of President Obama.” According to this expert, it wasn’t necessarily incorrect for Obama to bow, but the President’s “forward lurch” was “jarring and inappropriate.”

The expert described the bow as “in the form of a first year English teacher trying to impress with Karate Kid-level knowledge of Japanese customs. The bow as he performed did not just display weakness in Red State terms, but evoked weakness in Japanese terms.” He noted also that Japan’s Kyodo News emphasized footage of Obama’s more restrained bow to the Emperor’s wife, pictures that “show the president as dignified.” 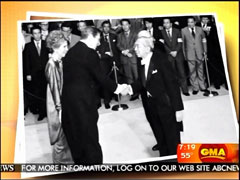 DIANE SAWYER: And before we leave the topic of the president's trip overseas I've often thought the hardest subject for every President, what do you do with royalty? We're not trained to greet royalty since 1776. [Onscreen photo of Obama bowing.] The President, as we saw with the emperor, went the full way, lots of comment about that. But we look back over the years and you have, of course, George Bush, former president George Bush Sr. there, head nod. There was Ronald Reagan, hand shake. [Pictures appear onscreen.] 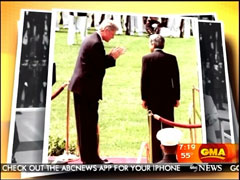 SAWYER: Richard Nixon went from the waist [Nixon appears to be leaning in.] and Bill Clinton, what was that? [Picture of Clinton clasping his hands, could be clapping.] Kind of yoga thing there. Anyway who can blame them for not knowing what to do? Allegedly, Teddy Roosevelt said once “If I see another king I'm going to bite him.” It's just too confusing when you're American.

That Teddy Roosevelt quote, by the way, came from a 1994 New York Times “Week in Review” item that made the rounds this weekend after Obama’s bow. If Sawyer read the whole item -- related the controversy over then-President Clinton’s much milder bow before the Emperor -- she would have learned that there’s not that much “confusion” over American protocol. According to the Times (then): “the ‘thou need not bow’ commandment from the State Department's protocol office maintained a constancy of more than 200 years.”

A Washington Post item from that same week (retrieved via Nexis) quoted Clinton’s top protocol officer talking about the arrangements for Emperor Akihito’s state visit to Washington: “‘Americans do not bow,’ said Chief of Protocol Molly Raiser. ‘The emperor is known to shake hands. This emperor is much more informal than his father was.’”

Today's New York Times briefly mentions the bow controversy, blaming it on the "conservative American bloggers" who critized Obama. "'During his meetings and his speech in Tokyo, the President observed protocol and enhanced the status of American interests in Japan and across Asia,' said an administration official traveling with the President, who spoke on the condition of anonymity according to protocol. 'Those who suggest otherwise are way off base and only looking to score political points.'"