As the 2020 campaign kicks into high gear, some people are going "over the top" and making serious mistakes. The Trump-hating ex-Republicans at the Lincoln Project posted a tweet that was so blatantly inaccurate, even Trump-bashing reporters ruled they were wrong on Twitter. They claimed someone in a Monday crowd listening to the president shouted out the word "Monkey" -- insert your racist tropes here -- but that wasn't even close. The person yelled "Spygate." 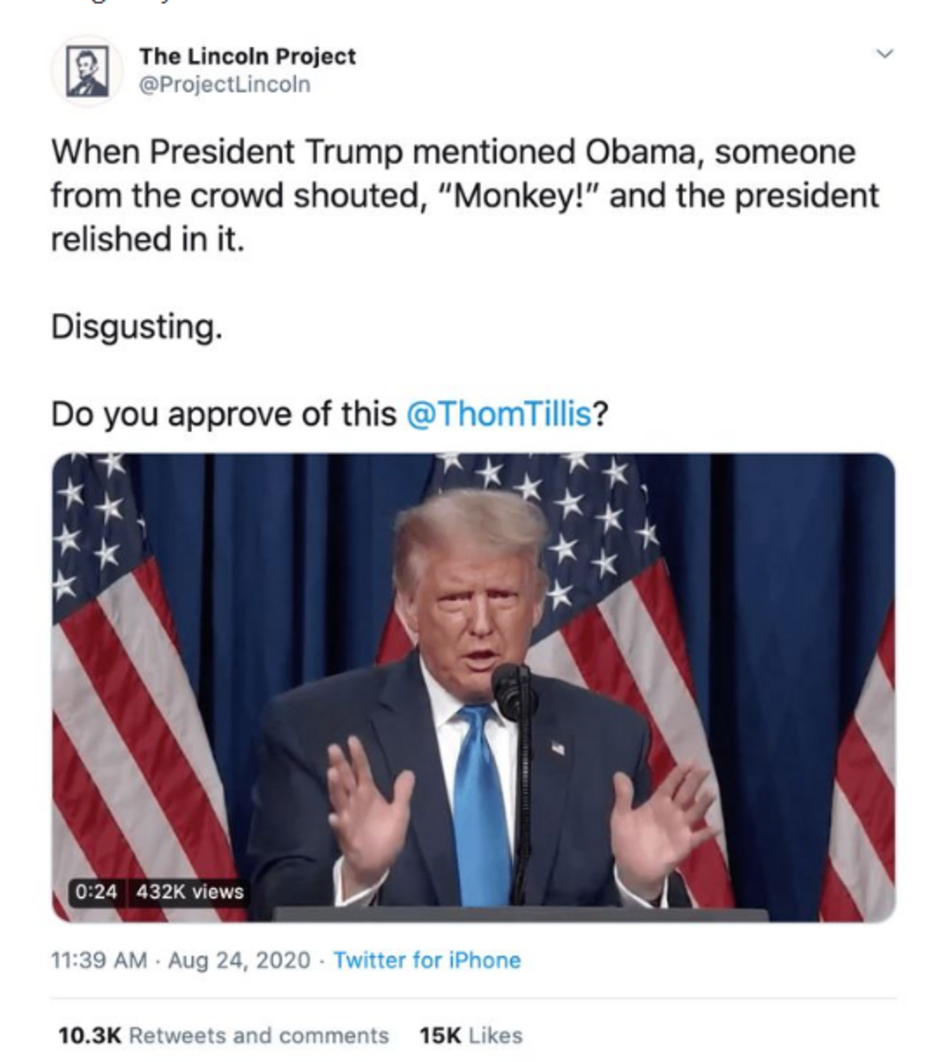 According to Sarah D. on Twitchy, many posters quickly disagreed with this smear.

It wasn’t long before several tweeters responded angrily: “This is false. He shouted ‘spygate.’”

People from The Daily Caller site echoed that sentiment: “Except for the fact that the person clearly yelled ‘spygate.’"

Obama and Biden spied on the Trump campaign in 2016, and they got caught. "Spygate!" shouted an audience member. "Drain the swamp!"

Now the Democrats are doing something more dangerous: trying to steal the election with universal mail-in voting, which lends itself to fraud.

Jerry Dunleavy pointed out that as usual, the Lincoln Project stole the concept from Resistance Twitter: 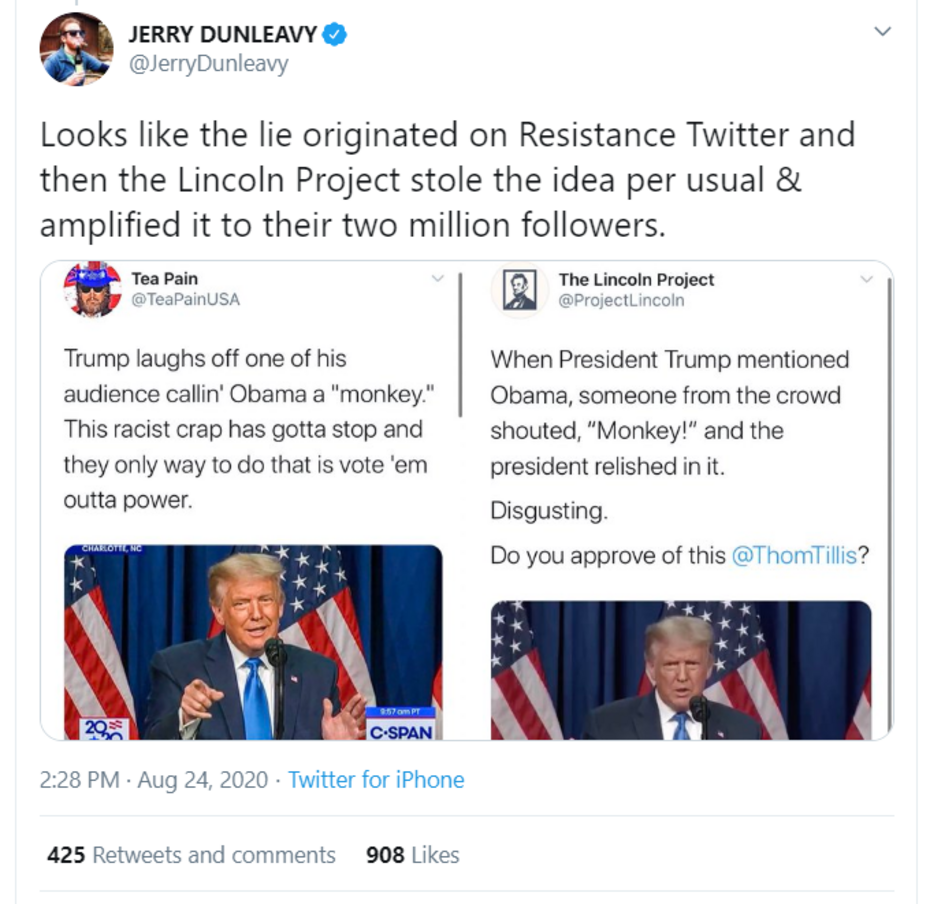 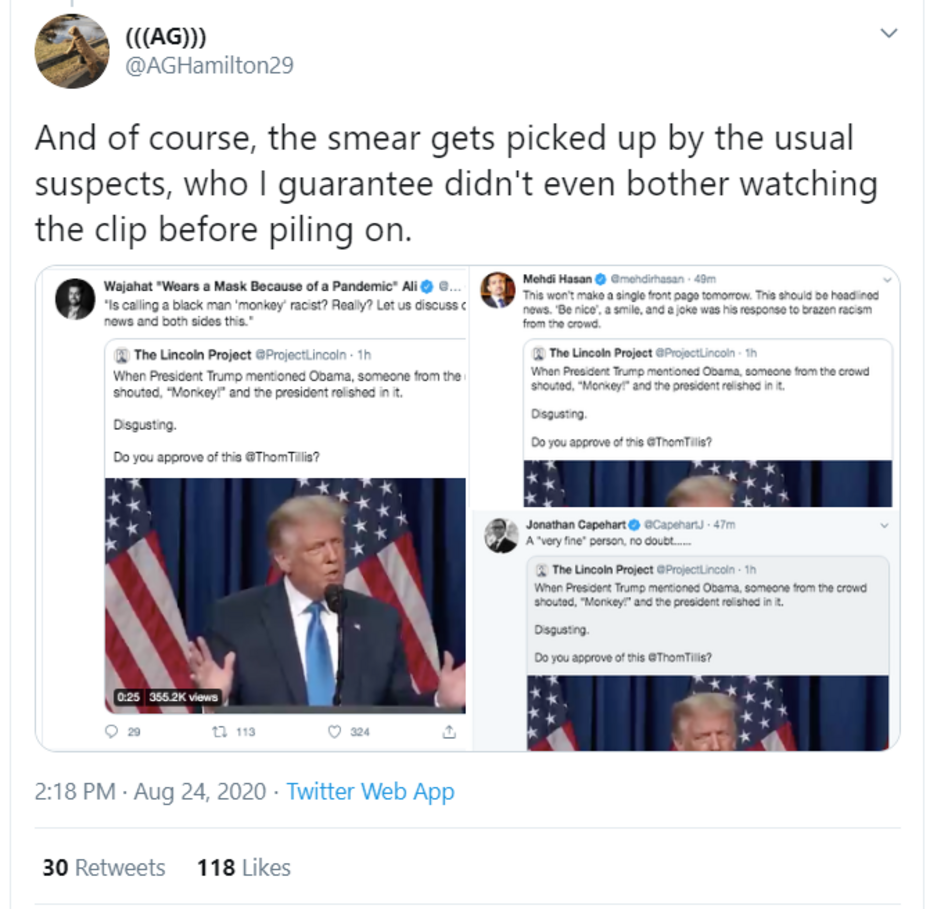 But this lying tweet was so bad, liberals and leftists cried foul.

Aaron Rupar at Vox: “I don't think this is right. I went back and re-listened. The man yells "Spygate!" and then someone in the crowd says, ‘Sleepy Joe!’ That latter remark is the one Trump joked about.”

Ex-CNNer Peter Hamby found a middle ground when he tweeted: “guy says spygate not monkey, but this has 10K likes.”

Washington Post political writer Philip Bump agreed that Trump “said ‘spygate’ -- and the laughing was about someone else saying ‘Sleepy Joe.’"

My producer and I listened to the original audio with headphones on, and it actually sounds like this person is yelling “spygate,” but that doesn’t explain why Trump stopped, told him to be nice & made a joke about NC.

Byron York, chief political correspondent for the Washington Examiner and a Fox News contributor, summarized the situation by posting: “We know some Dems appreciate Lincoln Project doing the dirty work. But must worry that they're out of control.”