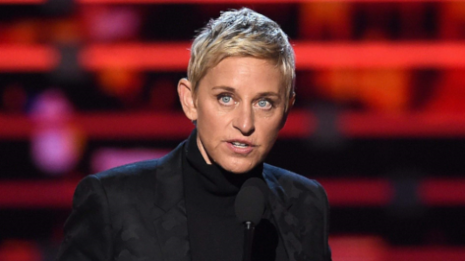 The liberal media loves talk show host Ellen DeGeneres, cheering her on as a non-political favorite. This is despite the fact that DeGeneres is a hard-left Democrat who isn't a fan of conservatives. So how will they react to the alleged "toxic" work environment she oversees?

Her recent difficulties led to executives holding a rare “all-staff” and “low morale” gathering to discuss the “toxic work environment” after an interview on the Fox News Channel regarding a former bodyguard who claimed she was "cold" and "demeaning” to him and others. FNC reporter Melissa Roberto explained on July 17:

Executive producers of "The Ellen DeGeneres Show" reportedly had no choice but to address allegations of its toxic workplace environment following Fox News' published interview with a bodyguard who documented his unsavory experience with the host.

Fox exposed the conditions at the talk show:

Ten additional former employees of the long-running show spoke on anonymity to the outlet with additional nightmarish claims about what it's like working for DeGeneres and top producers. Many backed up claims made by Majercak, who told us that he experienced DeGeneres' "cold" and "demeaning" behavior while protecting her at the 2014 Oscars ceremony.

In a May 1 piece, Roberto noted that the accusers all voiced the same story: DeGeneres is far from the compassionate and warm individual she appears to be on television. The situation has “bugged me for years," Majercak shared. "I see this person come across as being very enlightened and positive and awesome and everybody loves her and is in awe, and that's really not the case when you meet her in person."

While acknowledging that DeGeneres' role as host is no easy task, the former bodyguard said he initially believed he received the "brunt of her frustration" even though that's "no excuse” for her behavior. Several ex-employees shared harrowing details of their day-to-day experiences working at Ellen, which included claims of racist remarks and directives from producers not to speak to DeGeneres if she is roaming the office off-air.

As NewsBusters reported in mid-April, this isn’t the first time the host has gotten in trouble for the way she acts around employees. At that time, most of the crew was left out of work with reduced pay while a Burbank-based audiovisual house came in to produce technical elements of the show.

DeGeneres is a strong supporter of Democrats on her show and has mused about whether Donald Trump is "losing his mind."