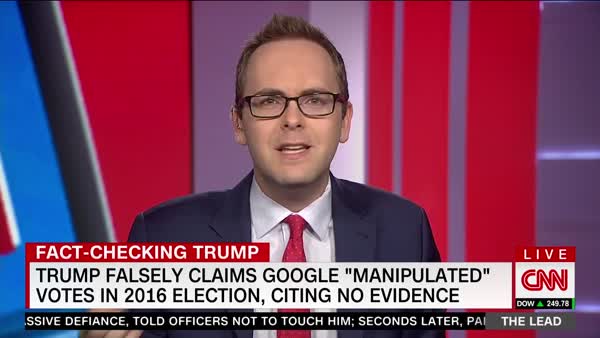 Being a “fact-checker” sounds like easy work. First, you go through a speech or an article while defining certain items as “facts.” After that, you turn your attention to verifying whether those items are correct by “checking” them.

CNN's latest motto is “Facts First,” and their fact checker has promised to cover candidates on both sides of the political aisle.

However, an article posted on Monday by Fox News Channel media reporters Joseph Wulfsohn and Brian Flood claimed that the motto “doesn’t seem to apply equally to everyone.”

Wulfsohn and Flood focused most of their attention on current in-house fact-checker Daniel Dale, who was hired by CNN away from the Toronto Star newspaper and "has become a favorite among CNN's anchors to refute claims Trump made at the latest press briefing or campaign rally.” The anti-Trump tilt has been incredibly lopsided.

Since Super Tuesday, Dale has written roughly 30 fact-check reports on President Trump. Meanwhile, Biden was only scrutinized once by the CNN reporter, and it came after the network's March 16 debate where both he and Sanders were fact-checked for their entire debate performances.

Dale wrote 38 pieces fact-checking Trump from Jan. 18 through April 10, and only one for Biden over the same time period. A different CNN reporter, Holmes Lybrand, also did one fact check on Biden’s comments about gun control on March 21.

The last time Dale himself fact-checked Biden individually was on Jan. 6 when the former lawmaker repeated his debunked claim that he opposed the Iraq War while in the Senate.

Back in early March, Dale told CNN host Brian Stelter that Trump's "egregious, total fabrications" were so much worse than Bernie Sanders. His "dishonesty, from the extent we had it, was traditional spin. He was stretching a little bit... it's just no comparison between Trump and anyone in the Democratic field."

"And do you intend to keep doing this for the Democrats all season long?" Stelter asked.

"Absolutely," Dale replied. "Especially once ... we have a real Democratic nominee. I plan to count their false claims just as we count Trump's because it matters for both sides."

38 to 1? That's not showing "it matters for both sides." Meanwhile, other fact-checkers have been busy with Biden, the media reporters noted.

“Biden earned ‘three Pinocchios’ from the Washington Post, was knocked by FactCheck.org and given a ‘Mostly False’ from Politifact over his claim that the Trump administration made ‘no effort’ to send medical experts to China as the coronavirus outbreak began to grow,” the FNC media reporters stated.

Biden's campaign also earned "four Pinocchios" from the Post for claiming that Trump had "silenced" top officials of the Centers for Disease Control and Prevention,” and the Post also determined reporters falsely "manipulated" Trump's rhetoric as if he had referred to the coronavirus as a "hoax." which he never did.