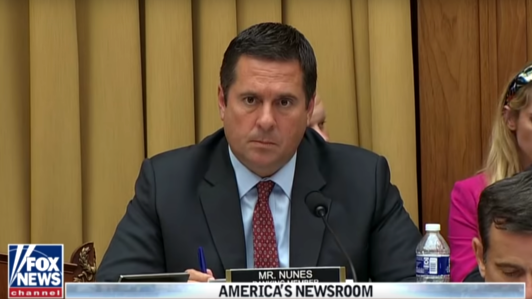 There are times when it seems that obviously liberal outlets in the “mainstream media” get away with producing “fake news” without facing any consequences for their poor reporting.

That situation may change after Thanksgiving, when California Republican Devin Nunes -- one of the press’s favorite targets during the “impeachment inquiry” held recently in the U.S. House of Representatives -- fights back in federal court against “demonstrably false” articles that have appeared on CNN and the Daily Beast website.

According to an article posted on Saturday by Washington Times reporter Rowan Scarborough, the items accused Nunes “of meeting with a former Ukraine prosecutor in a hunt for dirt on former Vice President Joe Biden.”

The item also quoted a spokesman for the GOP official, who released a statement that read in part:

These demonstrably false and scandalous stories published by the Daily Beast and CNN are the perfect example of defamation and reckless disregard for the truth.

Some political operative offered these fake stories to at least five different media outlets before finding someone irresponsible enough to publish them.

“I look forward to prosecuting these cases,” the California Republican added, “including the media outlets, as well as the sources of their fake stories, to the fullest extent of the law.” As a result, “I intend to hold the Daily Beast and CNN accountable for their actions,” he noted. “They will find themselves in court soon after Thanksgiving.”

Scarborough also noted that the source for the stories was an attorney for Soviet-born Lev Pamas, a U.S. citizen who accused Nunes of meeting “with former chief Ukraine prosecutor Viktor Shokin in Vienna in 2018” while serving as chairman of the House Permanent Select Committee on Intelligence.

Pamas, the reporter added, is a one-time associate of Trump attorney Rudolph Giuliani who is “living under house arrest at his Florida home after federal prosecutors charged him in New York with illegally funneling foreign money into U.S. political campaigns.”

Scarborough also referred to Nunes as “a Trump defender” who “has been the target of a number of liberal media articles. He has filed suit against the McClatchy newspaper chain for defamation.”

Then on Sunday, the Washington Times reporter noted that Nunes “ramped up his attack on allegations in CNN and Daily Beast stories, ... accusing them of being accessories to a conspiracy to obstruct justice.”

Scarborough stated that the California Republican also accused Pamas and Bondy of trying to “hamstring him as he leads House Republicans in a defense against Democrats’ drive to impeach President Trump.” Nunes also called on both liberal outlets to cooperate with his lawsuit since he is “going to be working with the appropriate law enforcement agencies.”

He also stressed that “it is not OK to work with someone who has been indicted on serious federal crimes to build a media narrative and dirty up a member of Congress” with “demonstrably false and scandalous stories.”