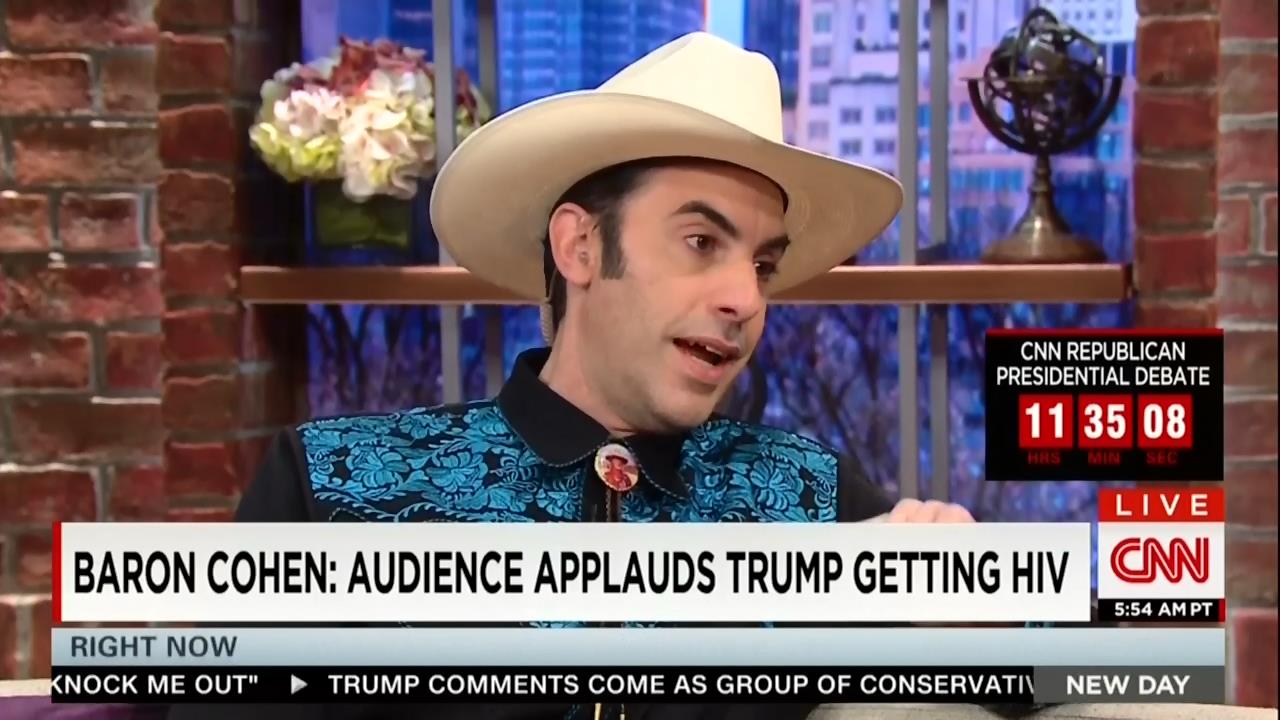 If there’s one thing you can say with certainty about Sacha Baron Cohen, it’s that the liberal comedian and actor is consistent in his hatred for all things Republican.

Even when he was nominated on Tuesday for an Emmy Award for Outstanding Directing in a Variety Series, the driving force behind the defunct Who Is America? Showtime series just couldn’t resist taking shots at former Vice President Dick Cheney and former vice presidential candidate Sarah Palin.

In a series of tweets the British comedian posted after the announcement was made, he stated:

Thank you to the Emmys for the nominations for Who Is America?. It was a bare-bones production -- I went out into the heartland of this country armed only with a camera crew, a makeup kit and my trusted pedophile detector.

I want to thank my crack team of researchers told to uncover bigotry, racism and hate in the US. That took them about 30 seconds … they just started following the President.

Of course, Cohen continued to vent his hatred.

“While I am flattered at these nods, it is a shame that my co-stars were not recognized,” he tweeted. “Particularly Dick Cheney, who I had hoped would come across on camera as someone who’d gleefully sent hundreds of thousands to their pointless death -- and boy, did he deliver.”

“I’ve played some lunatics in my time,” Cohen added while referring to such satirical characters as Ali G and Borat Sagdiyev, “but the look of vacuous evil in his eyes as he autographed a waterboard kit would put [angry actor] Daniel Day-Lewis to shame.”

As if those comments weren’t bizarre enough, the British comedian concluded by noting:

There’s one more person I need to thank even though she didn’t appear in the final project: Sarah Palin.

Sarah, if you are out there, and you are WAY out there, please know the last time unseen footage generated as much interest was when Donald Trump visited a Moscow hotel room.

However, as NewsBusters reported last August, Cohen impersonated a wounded veteran in order to set up a false interview with Palin.

That led Showtime executives to state that they “might let Sarah Palin off the hook” and not air that segment after all. The former GOP candidate had initially spoken out on Facebook about being “duped" by Cohen, describing his humor as "evil, exploitive, sick." Cohen ended up cutting his interview with the politician by claiming the interview wasn't good enough to air.

Palin had a right to be concerned since Cohen had stated that he produced the program to “express rage” and his “anger” at Trump’s America.

The liberal comedian added that the President’s so-called “Muslim travel ban” in 2017 inspired him to create the show. “I felt very, very upset about that,” he said. “And it was basically for me to just get this anger out of my system, and so I should really credit Donald Trump as the creator of the show.”

Previously, Cohen had said that a movie he made would become “a good force in the world” by giving President Trump AIDS in the film. The 71st Emmy Awards ceremony will be held on September 22 at the Microsoft Theater in Los Angeles. We’ll know then whether the British comedian and his fellow producers are rewarded by Hollywood for their constant attacks on conservatives.