If it wasn’t already clear that Stephen Colbert has contempt for Trump voters, the Late Show host made it obvious on Thursday night. A cartoon that opened the show mocked Trump-voting farmers as dumb, drunk hicks who deserve to suffer. The host turned the Mother Goose nursery rhyme “Farmer in the Dell” into an R-rated cartoon accusing the President of hurting farmers with his new tariffs during his trade war with China.

It’s not unusual for the program to start off with a “cold open,” when Colbert uses a skit or some other segment to slam Trump or other Republicans. On that night, the show started by airing a clip of John Berman, a co-host of CNN’s New Day with Alisyn Camerota. An off-camera man asked an obviously distraught farmer if he voted for Trump.

“I did,” the farmer replied. “I’ll never vote for him again.” With that as the introduction, the screen shifted to an animated image of the words “Nursery Rhymes” with simple, childlike music in the background. An animated version of a farmer riding a tractor with a poster of the phrase “Trump 2016” on its side came into view.

Tariffs posed by Trump put the farmers in a dump.

Oh no, the derry-o, the farmer’s in a slump. 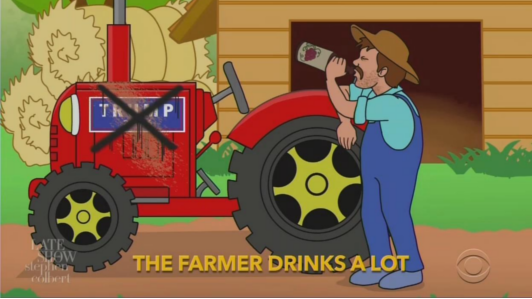 As if that wasn’t hostile enough, the singers continued:

The farmer lost his wife. She wants a better life.

She ran off with an ex-convict who rides a bitchin’ bike.

The farmer needs a job. He’s stripping while he sobs.

Hi-ho the stripper pole, they’re laughing at his knob.

The image changed to show the farmer wearing a skimpy stripper outfit while the men in the room laughed at him. To conclude the segment, the farmer was shown drinking alcohol while the “Trump 2016” insignia had a big, black “X” over it.

The farmer drinks a lot, his liver starts to rot.

In an article on the cartoon, Caleb Howe -- an editor with the Mediaite.com website -- described the segment as “dark” and “thin” on comedy:

[I]t’s one thing to say Trump is hurting farmers. But it seems like an odd choice to express concern for farmers by painting them as shameless drunkards who lose their shallow wives to motorcycle-riding criminals.

I was genuinely surprised they didn’t draw a gap in the cartoon farmer’s teeth.

Of course, this is far from the first time the liberal comedian has used his opening segment to slam conservatives. In early May, Colbert mocked the NRA as supposedly producing “Tanks 4 Kids” and arming stray cats with guns. He wasn't funny then, and he's not funny now.