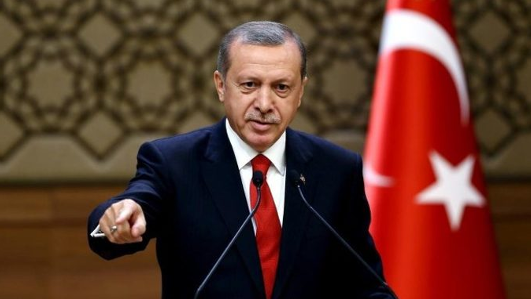 For a newspaper with the motto “Democracy Dies in Darkness,” the Washington Post apparently doesn’t mind sharing their light with a person who has been called the globe’s worst jailer of journalists.

Curiously, this isn’t the first time the liberal outlet has published an op-ed by Recep Tayyip Erdogan, the president of Turkey.

According to an article by Alex Griswold at the Washington Free Beacon, this is the second time in five months the Post carried remarks from someone who has the “dubious distinction” of being “one of the world’s worst curtailers of press freedom.”

The first item was posted on November 2, 2018, when Erdogan bragged about his nation’s efforts at uncovering Saudi Arabia's state-sanctioned murder of Washington Post columnist Jamal Khashoggi. “Over the course of the past month, Turkey has moved heaven and earth to shed light on all aspects of this case,” he wrote at the time.

Then on Tuesday, the newspaper carried a second article from Erdogan under the title “The New Zealand killer and the Islamic State are cut from the same cloth.” It appeared in Wednesday's Post with the headline "Familiar foes: ignorance hate."

In that item, the Turkish president stated: "[W]e must establish that there is absolutely no difference between the murderer who killed innocent people in New Zealand and those who have carried out terrorist acts in Turkey, France, Indonesia and elsewhere." He cried Islamophobia:

After attacks by the Islamic State, there was no shortage of Western politicians and commentators blaming the most deplorable acts of terrorism on Islam and Muslims --  people whose opinions are very much aligned with the Australian senator Fraser Anning. At the time, we objected to the association of our faith with terrorism, and pledged to disallow any attempt by terrorists to hijack our religion. Unfortunately, Islamophobia and xenophobia, among other practices incompatible with liberal values, were met with silence in Europe and other parts of the Western world.

Erdogan, lecturing on "liberal values"? He claimed to defend Christianity: "As a leader who has repeatedly stressed that terrorism has no religion, language or race, I categorically reject any attempt to associate last week's terrorist attacks with the teachings, morals or maxims of Christianity. If anything, what happened in New Zealand was the toxic product of ignorance and hate."

In the aftermath of the attack, “the West has certain responsibilities," Erdogan continued. "Western societies and governments must reject the normalization of racism, xenophobia and Islamophobia, which has been on the rise in recent years. It is crucial to establish that such twisted ideologies, such as anti-Semitism, amount to crimes against humanity,” he added.

Griswold also reported that Erdogan has been using video of the New Zealand murders taken by the killer as propaganda, airing the footage during election rallies.Playing off the fact that the Christchurch killer once visited Turkey, Erdogan denounced "occupiers who attempt to threaten our nation from tens of thousands of kilometers away.”

Not surprisingly, Erdogan's remark prompted diplomatic rebukes from New Zealand and Australia. Griswold linked to AP, which reported "In more inflammatory comments, Erdogan said any Australians and New Zealanders traveling to Turkey with anti-Muslim sentiments would be sent back in coffins 'like their grandfathers' were in the Gallipoli campaign."

Turkey led the world with at least 68 journalists behind bars at the end of 2018, according to the Committee to Protect Journalists, which reported "Even as Turkish President Recep Tayyip Erdoğan has been the fiercest critic of Saudi Arabia for the murder of Khashoggi, his government continued to jail more journalists than any other on the planet...Erdogan began the crackdown before the 2016 failed coup attempt, but afterward intensified it, shutting down more than 100 news outlets by decree."

This underlines the audacity of the Post, which  ran a full-page ad in December with a picture of Khashoggi and a candle in front of him and the words "A life is gone. The principles of free expression endure. The Washington Post."