A conservative activist who has taken on such wildly liberal institutions as colleges and universities while producing his own weekday radio program that “takes a licking and keeps on ticking” is Ben Shapiro.

However, the noted conservative found something unexpected to discuss when he served as a guest for ABC, where he was invited on the Fox News Channel last week to talk about liberal actor Mark Duplass saying something nice about him and then having to apologize.

Martha MacCallum -- who serves as the host for The Story weeknight program on the Fox News Channel -- began the dispute by stating: “Actor Mark Duplass apologiz[ed] to his fans tonight after sparking a nationwide backlash with his now-deleted tweet.”

I don't agree with him on much, but he is a genuine person whom who once helped me for no other reason than to be nice. He doesn't bend the truth. His intentions are good.

“That started a really big debate on Twitter that got pretty ugly.” MacCallum added before introducing Shapiro as a guest for that night.

“All right,” MacCallam stated. “So he wrote that. He then got a ton of heat all over Twitter from people digging up stuff that you wrote several years ago that you has since deleted or said that you regretted saying,”

“For one reason or another.” she added, and everything in Hollywood came at him,” even the Democrats “who realized he's not a particularly, well-known name, I don't think, to most people.”

“I think that Mark is a nice guy, from what I can tell,” Shapiro responded. “He came in to our offices a couple of months ago because he was doing a project about guns and gun control, and he wanted the kind of the right-wing Second Amendment view.”

“So he came in, we talked about an hour and a half,” the gun-rights added. “I told him at the time that, it's probably didn't know that we met since folks in Hollywood are not particularly fond of people on the right and his association with people on the right is not going to work out well.”

“And then this morning, he put up a full apology,” Shapiro remarked. “That was after I texted him last night, by the way, and told him that …  I didn't mind that he deleted the tweet considering he still has to work in this town, and Hollywood isn't fond of people who are friendly to anybody across the aisle."

“He put up a full apology for ever -- for ever having suggested that I was a nice person who had -- who had views worth listening to, so that was wonderful.” 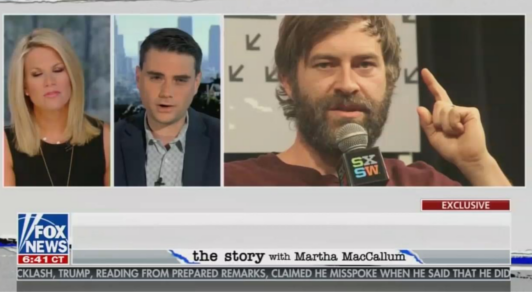 However, Shapiro also meant to say: “Just make sure none of these little f***ers jumps on my back. They’re hair pullers. At Ben Shapiro, 5'2"’, looks and sound prepubescent but technically a man. So for the purposes of brawl and the kicks headed towards his teeth and face, he shall be deemed a man.”

Nevertheless he also noted: “The news bureau chief  … once have a tattoo of Roseanne Barr so I can't speak to his mental health. But the fact that -- the fact that he is considered a member of good standing in Hollywood is pretty incredible.”

Amazing how in 24 hours I went from a nice guy with good intention to try to speak the truth to a racist, sexist, bigot and homophobe.

I'm getting a little bit used to considering that everybody on the left thinks that everyone who is not on the left is a racist, sexist, bigot and homophobe.”

“But you see a lot of times you have people who are very famous who stop by, and you tell your staff, don't take pictures with them, you know. I want them to feel free to come and go essentially and not get heat for it.”

“Even when I was on Bill Maher on HBO, Maher got flack for even having me on. That's sort of the way things work out here.”

“I feel bad for Duplass, honestly,” Shapiro stated. “I mean, he is sort of stuck between a rock and hard place and that he made a decent statement, and then everybody in the left came down on him and he still wants to work in the town.”