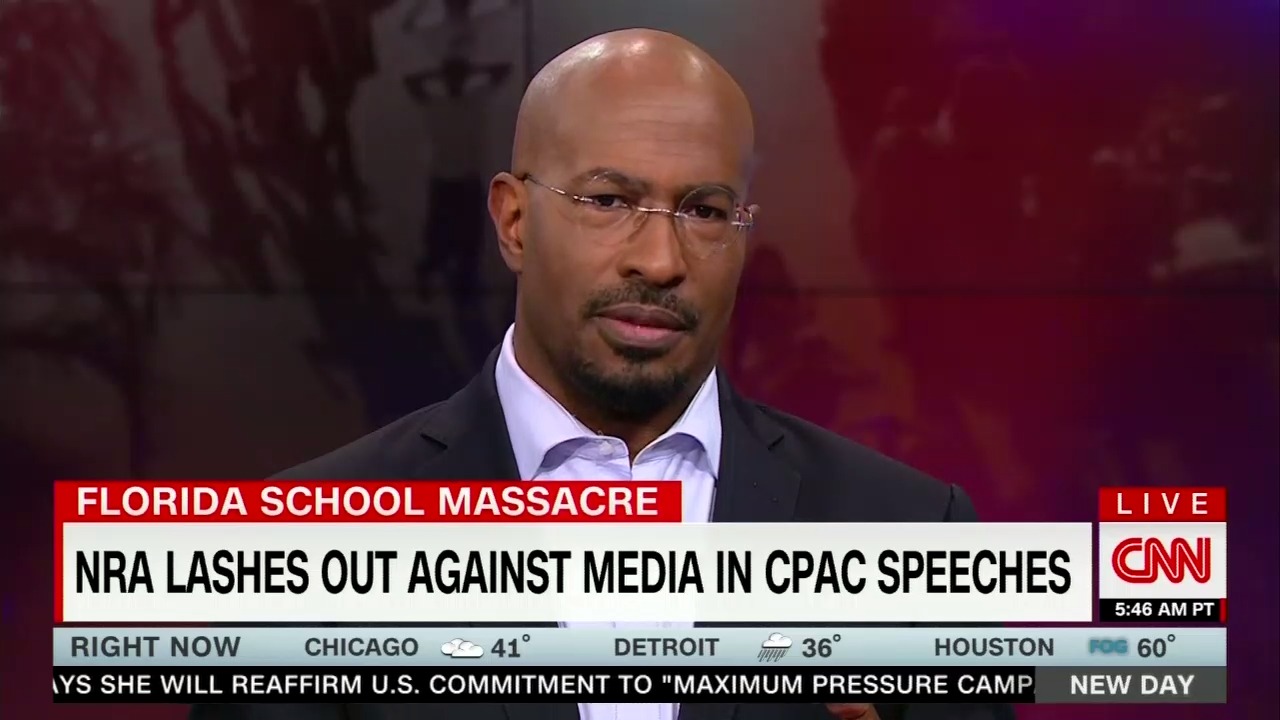 The fallout from the Valentine’s Day shooting in which 17 people were killed at the Stoneman Douglas High School in Parkland, Florida, continued on February 22, when Van Jones, a political commentator for the CNN, claimed that young people now see the National Rifle Association as an enemy -- like the Ku Klux Klan.

During a segment on CNN Thursday afternoon, Jones asserted that the NRA “has played a net destructive role for people who are trying to solve this problem” of mass shootings in schools.

There is a sense of fear and terror among people who are in elective office that even if they entertain certain notions that the NRA is going to drop a ton of bricks on them.

And so we haven’t had the kind of innovation, experimentation, trying of things.

However, Jones admitted: “I don’t know if any of the things that are being proposed would make any difference at all.”

“But,” he continued, “we should know more than we know right now because we should have been able to try things.”

“So now what’s happening is you have a whole generation of young people who essentially view the NRA as their enemy,” the CNN commentator claimed.

“To them, the NRA is like the KKK,” he asserted. “It’s just some hostile force that is against them, that is risking their lives.”

As a result, Jones continued, “You have young people now, they’re not fighting for their future. When I was a kid, my big problems were bullies and homework. I’m still traumatized by both.”

However, that’s not the only time Jones took aim at the NRA on Thursday. In an op-ed column on the CNN website, he stated: “Gun violence is rocking our world again -- and our politics. But even as political rancor runs high, Americans' views are dramatically shifting.”

He then quoted a poll released on Tuesday showing that “66 percent, or two-thirds of Americans, now want stricter gun control laws -- the highest recorded by Quinnipiac University since it started polling the issue after Sandy Hook.”

“According to the poll,” he noted, “support for tougher gun laws has jumped almost 20 points since December 2015. It also found a ban on assault weapons was backed by 67 percent of those surveyed.”

“Will policymakers take heed?” Jones asked. “The answer seems to lie in an unlikely place: with our children.”

In a surprising move, Jones stated, "The children of Parkland, Florida, are leading and people are listening. Jesus would be proud" of what he called "The Children's Crusade of 2018."

He continued by quoting an interesting source, the Bible verse found at Matthew 19:14:

In Jesus' time, children had very little status, and yet when his disciples were turning away the children and not allowing them to come receive blessings.

Jesus said: “Let the little children come to me, and do not hinder them, for the kingdom of heaven belongs to such as these.”

Centuries after Jesus’ time, “children began to stand up out of desire to create the future they wanted,” Jones stated. Referencing 12-year-old Freeman Hrawbowski, Jones noted, "Freeman Hrabowski was 12 years old when he was inspired to march in the Birmingham Children's Crusade in 1963."

“On May 2,” he added, “masses of children like Freeman left the 16th Street Baptist Church in groups, heading throughout the city to protest segregation peacefully.”

“One of their goals was to talk to the mayor of Birmingham about segregation in their city,” Jones stated. “They were not received well.”

“On the first day of the protest, hundreds of children were arrested,” he noted. “By the second day, Commissioner of Public Safety Bull Connor ordered police to spray the children with powerful water hoses, hit them with batons, and threaten them with police dogs.”

“After seeing images of the children under attack,” Jones stated, “the American people said no more, and business leaders were forced to desegregate downtown Birmingham.”

Therefore, he noted: “The future was forever altered, and we live in the world they created.”

This week, hundreds of Florida schoolchildren are standing up and demanding the creation of a future that is free of gun violence for them and all the children who will follow.

Let the children come. Let them lead. Let them create the future they demand. Let us help them every step of the way. And let us live in the world they create.

According to an article by Paul Crookston, media analyst for the Washington Free Beacon website: “Students have responded to the shooting in different ways, but media coverage has focused on the students calling for gun control.”