Even though few political campaigns are underway this year, the gubernatorial contests in New Jersey and Virginia have drawn the attention of the All Things Considered  program on the liberal, taxpayer-funded National Public Radio network.

Host Ari Shapiro began a segment on Tuesday, October 31, by stating: “The Republican candidates in both of these states have released attack ads claiming the Democratic opponents would not enforce immigration laws and would endanger people living in those states.”

He introduced a report from Joe Hernandez of Philadelphia member station WHYY, but NPR completely skipped over the controversial immigration ad made by Democrats -- the now-withdrawn Latino Victory Fund ad where minority kids were running away from a white brute in a pickup truck with a Confederate flag and a Gillespie bumper sticker.

How could they make an entire story on tough GOP ads, and skip this one? Wednesday's Washington Post even editorialized against the commercial!

Hernandez noted "For months, Republican candidate Kim Guadagno focused her campaign for governor of New Jersey on a promise to lower property taxes. She also reached out to the state's sizable Latino population, kicking off her campaign at a Mexican restaurant and picking a Cuban running mate. But just a few weeks before the election, down heavily in the polls to her Democratic opponent, Guadagno released a TV ad entitled 'Sanctuary.' It opens with an image of illegal immigrant and child rapist Jose Carranza in an orange prison jumpsuit."

The ad then contained a sound bite of Democratic candidate Phil Murphy declaring: “We'll be a sanctuary not just city but state.” The narratore concluded: Phil Murphy is “too dangerous for New Jersey.” 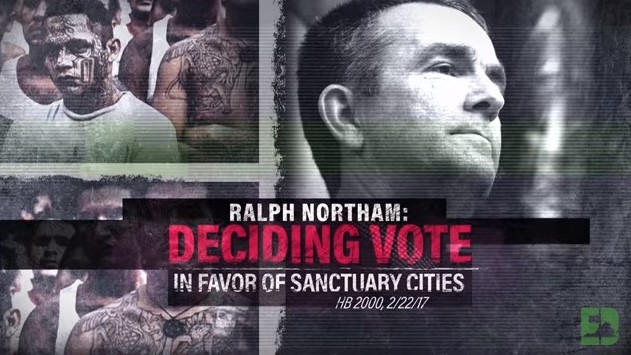 “Similar ads are airing in Virginia,” Hernandez notes. “There, Republican Ed Gillespie is slamming Democrat Ralph Northam for voting against a bill that would've banned sanctuary cities in Virginia, even though there aren't any.” That's odd, since they run the audio noting Northam was a deciding vote (as lieutentant governor) in February banning local sanctuary laws.

“Gillespie, a former Republican National Committee chair who once spoke of diversifying the GOP, moved to the right after a tough primary this spring,” the reporter states.

“In this TV ad, the Gillespie campaign implies that Northam's vote against the bill was a boon to the violent street gang MS-13, which was started by immigrants from El Salvador,” Hernandez notes.

Hernandez also sticks up for Democrats: "Both Phil Murphy in New Jersey and Ralph Northam in Virginia say violent criminals should be prosecuted, regardless of their immigration status. But that hasn't stopped the Republican candidates in both states from going all in on the illegal immigration message."

The reporter then asserts: “It's a page out of the political playbook of President Trump, who kicked off his presidential campaign attacking Mexican immigrants.”

NPR dragged out once again audio of of Donald Trump's 2015 announcement speech declaring that illegal Mexican immigrants are “bringing drugs. They're bringing crime. They're rapists. And some, I assume, are good people.”

At that point, Stella Rouse, director of the liberal Center for American Politics and Citizenship, claims Trump’s “philosophy is the one that's being implemented. You can see that in these two races.”

Rouse also asserts: “Republican candidates have to follow their party's voters, and those voters are with Trump on immigration. That's despite studies showing that immigrants in the country illegally commit crimes at lower rates than native-born U.S. citizens.”

Hernandez concluded the segment by stating: “Whether that message works will be up to voters next Tuesday.”