If you haven’t been following the race for governor of Virginia between Republican activist Ed Gillespie and his Democrat opponent, Ralph Northam, a hostile television advertisement released on Monday by the liberal Latino Victory Fund demonstrates that the race has tightened dramatically as the Tuesday, November 7, election draws nearer.

The minute-long ad -- entitled “American Nightmare” -- depicts a large pick-up truck with a Gillespie campaign sticker, flying a large Confederate flag and displaying a “Don’t Tread on Me” front license plate while chasing down a group of minority children, including a Muslim girl wearing a hijab, an African-American boy and two young Latinos.

“In a desperate attempt to become Virginia’s next governor, Ed Gillespie has eagerly embraced racism and xenophobia," the group tweeted Monday morning. “We refuse to stand by as Gillespie slanders our families and portrays our community as thugs, criminals and gang members.”

According to an article on Monday by Fenit Nirappil, who covers politics and government in Maryland, Virginia and D.C. for the Washington Post, the spot ends with the children waking up from a nightmare and adults watching footage on television of torch-bearing white nationalists marching in Charlottesville.

“Is this what Donald Trump and Ed Gillespie mean by the American dream?” the female narrator asks before telling voters to “reject hate.”

“The commercial, which the Fund says is airing through Election Day on English- and Spanish-language stations in the Richmond and Washington markets, is the latest in a bitter battle on the airwaves,” Nirappil stated.

The Post didn't publish this story anywhere in the Halloween paper.

The “progressive” group noted that its goal is to build "Latino political power by electing progressive Latino candidates to all levels of government.”

“Gillespie, a longtime GOP operative, has launched ads seeking to tie his Democratic opponent Ralph Northam to MS-13 gang violence and a sex offender who briefly got his rights restored,” the reporter added. 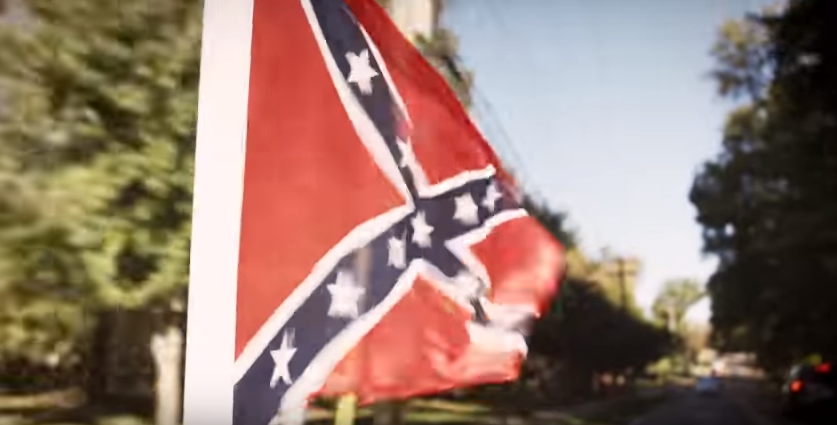 “The Republican candidate,” Nirappil noted, “has also launched commercials vowing to protect the state’s Confederate monuments and warning that Northam supports their removal.

“Gillespie’s advertising has drawn a rebuke from minority advocacy groups, Democrats, and -- in recent days -- from some Republicans who see it as a departure from Gillespie’s long-standing position that the GOP needs to reach out to non-white voters.”

Northam retaliated with a statewide commercial blasting Gillespie’s advertisements as “false attacks” and “despicable.” He also approved a Democratic mailer linking his GOP rival to the white nationalists who marched in Charlottesville, urging voters to stand up to “Trump, Gillespie and hate.”

Not surprisingly, Republicans blasted that mailer and “accused Northam of exploiting the deadly violence in Charlottesville for political gain,” the reporter stated. “They also noted that Gillespie repeatedly condemned the white supremacists of Charlottesville.”

“But Democrats have responded that Gillespie’s campaign has commercials have amplified stereotypes about Latinos,” he indicated, “and that the candidate never explicitly condemned President Trump’s remarks that there were ‘very fine people on both sides’ during the Charlottesville conflict between neo-Nazis and counter protesters.”

“It’s a very stark ad, but those portrayals in the ad are what Latino and immigrant communities feel right now in Virginia,” Latino Victory Fund President Cristóbal J. Alex said. “If Gillespie is successful in scapegoating Latinos and borrowing from Trump’s playbook, we will see those types of attacks against our community throughout the 2018 midterms.”

On the other hand, “Gillespie Campaign Manager Chris Leavitt called the ads from the Latino Victory Fund a ‘desperate smear campaign.’”

Now his allies have reached a new low with a disgusting, vile television ad seeking to instill fear in our children with that same imagery.

This is not an attack on Ed Gillespie anymore. This is an all-out attack on the people of Virginia.

“This latest ad gives a clear indication of just what Ralph Northam and his national Democratic allies think of all of us,” he continued, “and it’s sickening.”

“Independent groups are denouncing Ed Gillespie because he has run the most divisive, fear-mongering campaign in modern history,” said Ofirah Yheskel. “It is not shocking that communities of color are scared of what his Trump-like policy positions mean for them.”

Meanwhile, Gillespie spent Sunday campaigning with U.S. Sen. Rob Portman -- a Republican from Ohio -- who touted his moderate record on issues of addiction and criminal justice, and defended him from critics disappointed by his ad campaign.

“He’s a Republican reformer,” Portman told the Post. “He goes everywhere, he’ll talk to everybody. I think he’ll be a national leader.”

It will be interesting to see which campaign wins next Tuesday, and how much of an impact those tactics will have on the 2018 midterm elections.