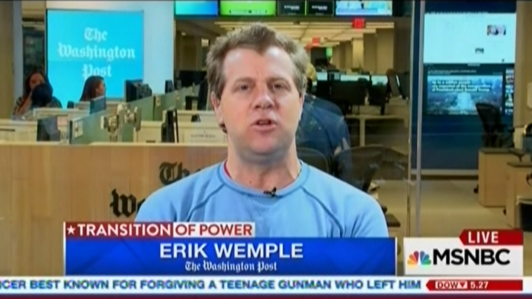 Even before President Donald Trump announced on Thursday, June 1, that the U.S. was pulling out of the Paris Accord regarding climate change, Eric Wemple -- a media blogger for the Washington Post -- was in his usual mode, slamming one of Trump's "favorite television shows,” Fox & Friends, which airs mornings on the Fox News Channel, as “a planetary threat.”

The columnist began by stating he would “gauge the sophistication of climate change discussion” on the program, referring to remarks made by Mark Steyn, whom he dismissed as just “a conservative commentator.” (As if Van Jones was an astrophysicist?)

Steyn had asserted: “The planet will be fine. It will shrug off your SUV and your air conditioner without a thought, as it has for thousands of years.”

“To me, this sums up the absolute decadence of the political class,” Steyn added before noting that the change would require spending “trillions of dollars. It’s bonkers.”

There were times when on-air stupidity of this sort was ignorable, back when presidents could identify propaganda. Based on the tweets of the current president — a documented fan of Fox & Friends — we know those times are finished. By an accident of fate, the president’s public-policy awareness draws to a considerable degree from the weakest link in U.S. media. And my, how weak it is.

Wemple is old enough to remember the panicked warnings of 1988, 1989, 1990 -- when the media warned that the Earth would face "enormous calamities" by global warming in a "very short time." That didn't happen. But liberals never look at their own record of doom-and-gloom predictions.

NBC ran a three-part series hosted by radical-left doomsayer Paul Ehrlich, who predicted Americans would soon "tie your boat to the Washington Monument" and flooding would make the Capitol building "unusable." False!

When asked why climate change is ‘the religion of the left,’” Steyn said: “I think precisely because it is so meaningless.” He added:

But if you say to them: “Well, we can control the very heavens.” You know, “That we can do.” And it’s actually literally insane. The less it has to do with your life, the more the left is invested in it.”

Steyn then drew a contrast between the threat posed by climate change and other threats.

“If you’re blown up at an Ariana Grande concert, the mayor of London and the prime minister of France say: ‘Get used to it. That’s just the way it is. We can’t do anything about it.’ But if you want to lower the thermostat of the planet by a third of a degree in the year 2100, that we can do,” the commentator asserted.

“Such comments left open various gaps for rebuttal, including, for starters, the fact that air conditioning was invented in 1902, not thousands of years ago,” Wemple replied.

“Not to mention the false choice between addressing climate change and addressing terrorism,” he continued. “Perhaps the Fox & Friends crew hasn’t brushed up on the role of climate change in the rise of the Islamic State.”

Wemple was referring to an article on the Politifact website in September of 2015, when Linda Qui wrote:

“Absurd,” “embarrassing” and “brazenly silly” were some of the insults hurled at Democratic presidential candidate Martin O’Malley when he suggested in July that climate change contributed to the rise of ISIS [the Islamic State of Iraq and Syria]. Despite the derision, the former governor of Maryland continues to stand by his talking point.

One of the things that preceded the failure of the nation-state of Syria and the rise of ISIS was the effect of climate change and the mega-drought that affected that region, wiped out farmers, drove people to cities, created a humanitarian crisis," O’Malley told Bloomberg TV on July 20.

It’s ironic that Wemple considers the most popular morning news program on cable television to be “weak” long after the “mainstream media” shows have lost ratings and respect because of their own flaws and unjustified pride.