Krauthammer: Obama's Wrong When He Claims We're Winning Against ISIS

While a panelist on Monday night's edition of the Special Report program, syndicated columnist Charles Krauthammer criticized President Barack Obama for “trying to convince us that we are actually prevailing, winning, pushing in on ISIS (the Islamic State of Iraq and Syria).”

The regular contributor to the Fox News Channel program said that the Democratic occupant of the White House is wrong because the terrorist organization -- which is also known as ISIL, the Islamic State of Iraq and the Levant -- is actually “expanding” its territory.

The segment began with a clip of Obama giving a speech earlier in the day at the Pentagon:

We are hitting ISIL harder than ever. Coalition aircraft -- our fighters, bombers and drones -- have been increasing the pace of their strikes, nearly 9,000 as of today. Last month, in November, we dropped more bombs on ISIL targets than any other month since this campaign started.

We're also taking out ISIL leaders, commanders and killers one by one. … The point is ISIL leaders cannot hide, and our next message to them is simple: “You're next.”

Host Bret Baier then quoted a statement from Senator Tom Cotton of Arkansas, who asserted that “Obama's remarks at the Pentagon were just more of the same, tired rhetoric.”

“Why is he just now hitting ISIS harder than ever?” the GOP official asked. 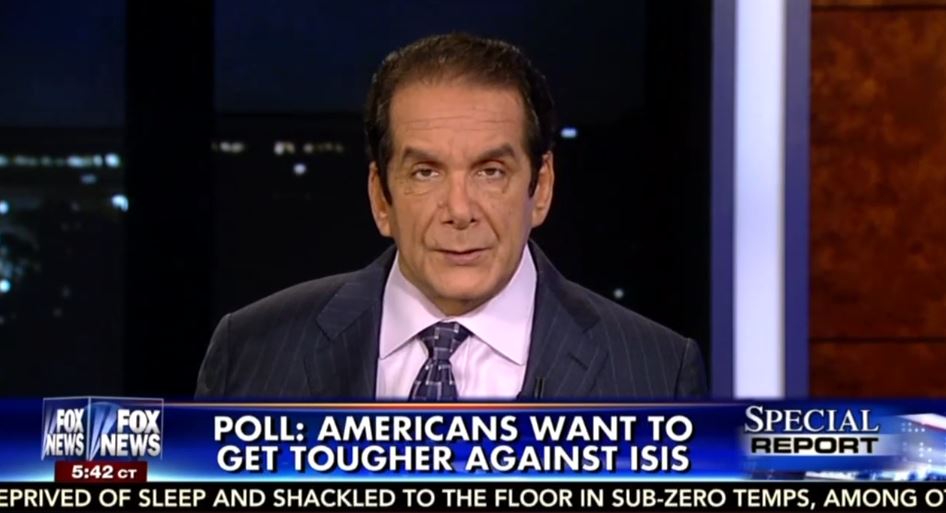 “It's troubling that in the wake of Paris and San Bernardino, the president seems more concerned about sounding tough” by quoting “percentages and statistics that may sound impressive but actually say little," he noted.

“Look,” Krauthammer stated regarding the president, “his problem is that he's trying to convince us that we are actually prevailing, winning, pushing in on ISIS.”

The columnist then noted:

The fact is that his own chairman of the Joint Chiefs of Staff told Congress that we have not contained ISIS. We had Dianne Feinstein, the leading Democrat in the Senate Intelligence Committee, saying that it is expanding.

“We have got Beirut,” he noted. “We have got Paris. We have San Bernardino. We have the attack in Sinai. We have ISIS establishing a colony in the city of Sirte in Libya."

“This is sort of an actual imperial expansion with a satellite, and Obama is still trying to convince us that we are winning when it's obviously not true,” the columnist added.

Like Cotton, Krauthammer hammered Obama for his use of statistics, noting that “he has a list of people whom we've killed, as if anybody has any idea of who they are.”

That tactic is “reminiscent of the strategy in the Vietnam War when we would announce the body counts, the ratio of dead Vietcong to Americans,” the panelist indicated. “And it was always lopsided, and we lost the damn war because that's not how you gauge who is winning and losing in such a war.”

Krauthammer's comments were made in response to a comment from host Bret Baier, who stated that few Democrats “have walked away from the administration on its ISIS strategy” while “Republicans have been pretty vocal.”

Also during the panel discussion, the columnist slammed Obama over his concept, “which he refuses to let go of, that Guantanamo is a powerful recruiting tool” even though “it's not reflected in any of the propaganda.”

Krauthammer continued: “And the idea that ISIS recruits by bewailing and bemoaning how unfairly terrorists are treated in Guantanamo as opposed to recruiting with unmatched success in the history of terrorism by displaying its own cruelty, its own successes, its own sort of inevitability.”

He added that the situation at Guantanamo is “a direct result of the weakened Obama policy,” which is "to miss the entire story of what is Obama's -- excuse me, that was a bad one -- ISIS's attractiveness.”

“And that Obama doesn't understand this after seven years is truly mystifying,” he stated.

Krauthammer wasn't the only Fox News analyst on Monday to criticize Obama's policies. While a guest on the Outnumbered noontime program, Judge Andrew Napolitano said the president's speech was "a politically tone-deaf pre-Christmas public relations measure that in this instance satisfies no one but himself."

And Greg Gutfeld, a co-host on The Five, slammed the president for calling the Paris climate deal "the best chance we've had to save the one planet we've got."

"And you wonder why terrorists enter America unnoticed," Gutfeld said. "It's 'cause these dolts are too obsessed over Celsius to see the real threats."