The Top 10 Most Outrageous Media Attacks Against Paul Ryan

Now that Representative Paul Ryan (R-Wis.) has been named Mitt Romney's running mate in the upcoming presidential election, we can expect the Democrats and the media to set new lows in their attacks on him.

Unfortunately, over the years, liberally biased journalists have had plenty of practice. Here's our look at the top 10 most outrageous media attacks on Paul Ryan.

On the April 1 (no fooling) edition of “The Diane Rehm Show” on National Public Radio, the host could not bear to hear any Republican receive praise -- especially Paul Ryan.

After her on-air guest, columnist Doyle McManus, called the Congressman's budget “a huge, ambitious, bold budget that would restructure the tax system,” the host replied that the proposal is “going nowhere.”

Rehm then denounced Ryan for wasting "precious time" on his spending-cut proposals.

"You know what I don't understand, frankly, is that everybody knew it was not going to go anywhere in the Senate. Why waste what precious time there is to pass a bill like this?"

Um, maybe perhaps because it is the job of the House of Representatives to create a budget per the U.S. Constitution and because the Democratically controlled Senate has literally refused to generate any kind of budget for the past three years?

9. David Gregory: Is Paul Ryan 'a little too incendiary' to be vice president?

“[T]he question, chairman, is whether a guy like Paul Ryan is a little too incendiary,” he said. “Would the left be able to really go to work on him because of his views about Medicare, because of his budget? Do you think Romney looks at that and says, 'Boy, he's attractive, he doubles down on my message, but he'd just be too much of a lightning rod?' "

“This is a person of substance that I serve with in the House, I'm very proud to serve with, who has a lot of great ideas,” he stated. “If he's not the vice president, he still is one of the people on the short list for key cabinet positions.

The Cable News Network praised a group of nuns lambasting the Ryan budget without bothering to include any response from the Wisconsin Congressman, who is a longtime Catholic.

“You go, girls!” CNN's Carol Costello cheered the "Nuns on the Bus" tour, which received eight different mentions on the network from June 13 through July 3.

"Congressman Paul Ryan. I mean, he is a faithful Catholic, but he's misguided," asserted Sr. Simone Campbell. "Many politicians offer deeply flawed justifications for the federal budget. They ought to get some theological help."

7. CBS anchor laughs in Ryan's face after he won't accept her ridiculous premise

During the CBS This Morning program on Friday, July 20, host Norah O'Donnell challenged Ryan's correct assertion that keeping the current tax rates, instead of raising them as President Obama wants, ought not to be called cutting taxes.

"We're just talking about keeping taxes where they are."

“You're afraid to call them tax cuts now?" O'Donnell laughed when Ryan confirmed his response and she replied: "Oh, Congressman, come on!"

Liberal radio talk show host Thom Martmann, known for saying things that would have gotten Rush Limbaugh hounded off the air in minutes, decided to engage in a little bit of psycological projection about Ryan this past December:

“I am of the opinion that Paul Ryan is actually a sociopath, and I use that word very, very, very carefully,” Hartmann said. “And sociopaths are people who are typically, you know -- Smart sociopaths can be incredibly charming. Ted Bundy, who was a sociopath and a serial killer, his sociopathy came out as a murderer.

“Sociopaths think that everybody else in the world is just an object to be manipulated, and that they're the only people in the world who actually experience real emotions... and they can be very, very, very charming,' he added

5. Schultz: ‘Republicans want violence to take place in our society’

Last October, Ed Schultz stated during his hour-long weekday program on MSNBC to accuse Ryan of nothing less than inciting a civil war.

After playing a clip of the Congressman describing the way President Obama is "sowing social unrest and class resentment," the host stated:

“It's outrageous what that guy just said! He is inciting civil war! That's what he's doing,” Schultz bellowed. “You take his comments, and you see exactly what they mean. It's almost as if Republicans want violence to take place in our society.”

No list of attacks on a Republican would be complete without a comment from self-described funnyman Bill Maher, who discussed Ryan last June:

When Ryan and his fellow House Republicans unveiled their budget and tax reform plan, MSNBC anchor Alex Wagner declared the day “Christmas in March” since the GOP document would be used “as a handy cudgel with which Democrats and MSNBC could bludgeon politically hapless Republicans.” 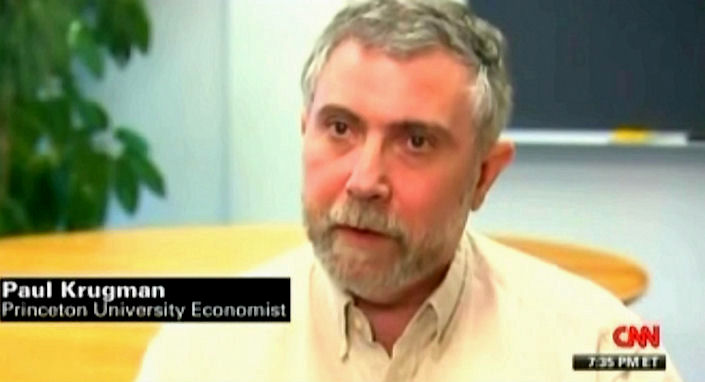 2. Krugman accuses Ryan of wanting to ‘kill people, no question’ by supporting vouchers

Asked about Ryan's support of changing Medicare into more of a voucher model, New York Times columnist Paul Krugman replied: “To be a little melodramatic, the voucher would kill people, no question.”

“The cuts in Medicare that he's proposing, the replacement of Medicare by a voucher system, would in the end mean that tens of millions of older Americans would not be able to afford essential health care,” Krugman said. “So that counts as cruelty to me.”

As usual, this was Krugman engaging in yet another moment of unintential self-parody since earlier, he has repeatedly accused conservatives of engaging in “eliminationist” and “toxic” political rhetoric.

In May of 2011, almost all news networks were busy covering President Obama's latest campaign speech to notice that one of the most offensive political advertisements in recent memory had been released.

The video, which shows a frightened elderly woman being pushed off a cliff by a Paul Ryan-lookalike parrots the liberal meme that Republicans want to kill old people by ending Medicare.

Besides the sheer offensiveness of the ad (it is literally the only ad in history featuring an innocent person being murdered), it was also extremely hypocritical since President Obama's campaign staff has boasted about his "achievement" of cutting Medicare spending by $700 billion. How could any fair journalist not call liberals to account for their gross hypocrisy?

Instead of fairly denouncing this despicable ad, the liberal media have laughed at it and even promoted it as "very effective and truthful." CBS reporter Norah O'Donnell asked Ryan about the ad but instead of asking him his opinion of the ad, used it as a way to attack him.

Despite all the list, you can bet that the above statements will be child's play compared to what the liberal media are going to say about Paul Ryan as the general election moves into full swing. Be sure to visit NewsBusters often as we chronicle their latest attacks.