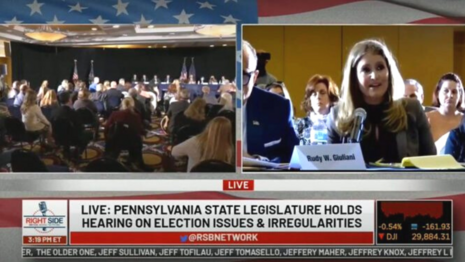 The mainstream media, rather than cover in any real detail the serious allegations of voting fraud that were presented at a Gettysburg hearing of the Pennsylvania Senate Majority Policy Committee on Wednesday, instead mocked and dismissed the event.

In addition, the story put "hearing" in quotes so as to present it as somehow not a real hearing.

President Donald Trump has invited Republican lawmakers from Pennsylvania to the White House on Wednesday night, following a "hearing" the lawmakers hosted in Gettysburg over baseless allegations of voter fraud in this month's election that Trump called in to.

Despite the allegations of voter fraud presented by many witnesses at the hearing, no coverage of this in the CNN story although they did note that, "State and local election officials have said there is no evidence of widespread voter fraud..."

MSNBC also avoided the allegations presented at the hearing and followed CNN's lead by putting "hearing" in quotes in their story: "GOP state senators in Pennsylvania announced plans for a "hearing" on the completed presidential election, though it wouldn't be an actual legislative session or sanctioned legislative event."

And if that wasn't subtle enough for their readers, MSNBC kept repeating that it was a "fake hearing" or a "faux hearing," starting with the subtitle, "At a fake hearing in Pennsylvania, Trump appeared via cellphone to offer strange lies in a state that's already certified his defeat."

...Trump, who was reportedly planning to appear at this faux hearing before changing his plans...

...So to recap, at a fake hearing, Trump offered strange lies in a state that's already certified his defeat."

CBS News in a rather arrogant tone, sputtered that they simply would not repeat what Trump said when he called in to the hearing: "All of the president's false and unfounded statements will not be repeated in this article."

Finally we have the case of Twitter, infamous for its Hunter Biden laptop story suppression, immediately attempting to suppress the Pennsylvania state senator who called the hearing, by suspending his personal Twitter account as you can see in this Epoch Times report, "Twitter Suspends Account of State Senator Who Called Pennsylvania Election Hearing."

Twitter on Wednesday suspended the account of Pennsylvania Sen. Doug Mastriano, a Republican who called an election oversight hearing that presented allegations and evidence of voter fraud.

Mastriano’s personal account was active until Wednesday afternoon. The page for the account now says it is suspended.

Exit question: Why the obvious desperation of the mainstream media to childishly attempt to invalidate the Gettysburg hearing while not going into any detail of what was revealed there by multiple witnesses?