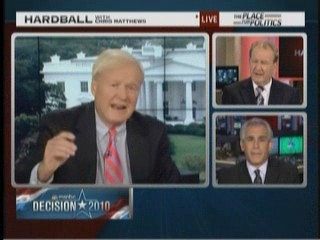 An extraordinary thing happened on MSNBC Tuesday: Chris Matthews scolded a fellow liberal journalist for endorsing all of the Democrat candidates up for election in the Senate this November.

While discussing the battle between Republican candidate Linda McMahon and Democrat candidate Richard Blumenthal in Connecticut, the "Hardball" host expressed serious concerns about the latter lying about his military service.

After playing a tape from Monday's debate of Blumenthal haplessly trying to explain his position, Matthews asked liberal guest David Corn, "How do you say you served in Vietnam unintentionally when they`ve got the quotes?"

UNIDENTIFIED MALE: Would you lie about serving in a war?

RICHARD BLUMENTHAL (D-CT), ATTORNEY GENERAL, SENATE CANDIDATE: We have learned something very important since the days that I served in Vietnam.

UNIDENTIFIED MALE: Dick Blumenthal did it again and again!

BLUMENTHAL: I`m proud of my military service. On a few occasions out of hundreds when I commented on it, I described it inaccurately, and I regret it. I take full responsibility for it. It was not intentional, but that is no excuse. And I want to say that I am sorry, particularly to our veterans and most especially to the veterans of Vietnam.

MATTHEWS: Can you explain the fact that "I take full responsibility" for it but "It was not intentional"? How do you say you served in Vietnam unintentionally when they`ve got the quotes, just like they have on O`Donnell?

DAVID CORN, "MOTHER JONES": The interesting thing about this, Chris, is that even in some of the same speeches, he said it right sometimes and wrong sometimes. He contradicted himself really within five, ten minutes of one another. So it doesn`t seem like it was an outright deception, like we`ve seen in Congressman Kirk`s case and others --

CORN: I think it`s inexplicable, and I think he`d be up 20 points in the polls if he hadn`t made these dumb mistakes.

MATTHEWS: So you`re saying it`s a mistake to say you served in Vietnam when -- you say that`s a mistake, an unintentional, it`s an inaccuracy. It was like a slip of the tongue, is what he --

CORN: Because at the same time in the same speeches, he described his service accurately.

MATTHEWS: So you believe it was a slip of the tongue.

CORN: If he`s trying to lie, he`s then a really bad and lousy liar, which might be a good thing to have in politics.

MATTHEWS: Well, look -- I think you speak with forked tongue on these issue.

MATTHEWS: I don`t know why you`re defending this guy.

CORN: I`m not defending him!

CORN: Every single Democrat? No, not necessarily. I`m not --

MATTHEWS: Name one you don`t support!

MATTHEWS: Name one you don`t support!

MATTHEWS: You just endorsed him!

CORN: You know, he talked about --

CORN: Do you endorse?

MATTHEWS: No, but I see a problem with this guy`s statement.

MATTHEWS: I think it`s a problem more than anybody --

CORN: I agree with you! It is a problem!

Readers are advised that this is not the first time Matthews has expressed his disgust with Blumenthal's comments concerning his military service. Likely not coincidentally, Matthews' closing remarks on Tuesday included further condemnation of the Democrat senatorial candidate's war record discrepancies.

That said, the hypocrisy on display was nonetheless disturbing.

With little exception, Matthews is and has been a shill for Democrat candidates throughout his career. Never has this been more disgracefully apparent than in February 2008 when he claimed on the air that Barack Obama gave him a thrill up his leg.

Complicating matters further is the indisputable fact that the entire network Matthews works for is completely in the tank for left-leaning candidates and isn't at all ashamed to say so.

As such, Matthews chastising a guest for what he and all of his fellow colleagues do on a regular basis is akin to Claude Rains being shocked to find gambling going on in Humphrey Bogart's Casablanca casino.

Taking this one delicious step further, Matthews certainly would have expected Corn and virtually every liberal "journalist" in America to have fully supported him if he had run for Senate in Pennsylvania.

With that in mind, although it sure was fun seeing Matthews scold Corn - wouldn't it be marvelous if every time a member of the press campaigned for a politician in front of the camera he or she was immediately admonished for it? - it would have been far more meaningful if he would have had the courage to point that big accusatory finger at himself for his own past journalistic indiscretions.