Ed Schultz: One Nation Rally Had Just As Many People As Glenn Beck's 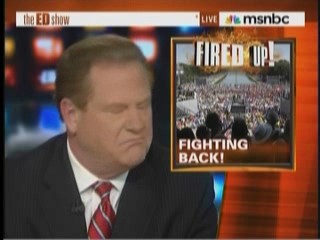 The delusion starting to take hold of the liberal media as the midterm elections near is becoming more and more apparent with each passing day.

So separated from reality is Schultz that towards the end of "The Ed Show," he even got into a fight with a guest about the matter.

But before we get there, here's an MSNBC anchor, someone actually on the payroll of a major television network, blatantly lying to his audience (video follows with partial transcript and commentary):

ED SCHULTZ: I had the honor of kicking off the One Nation rally on the steps of the Lincoln Memorial on Saturday. The passion in the crowd was unbelievable amongst the great Americans who traveled all across this country to fight for a better life for all of us and to try to right what has been wrong over the last few years as the party of no has tried to stop the progressive agenda. The forces of evil in the conservative movement are on a mission to take down the rally and marginalize the diverse crowd that attended. Conservatives want you to believe that -- well, first of all, nobody showed up and they're absolutely dead wrong about that. This Sunday the Washington Post reported, "More than 400 groups endorsed the Nation Working Together rally, which organizers said drew a crowd of 175,000 people - about what they expected."

Yes, that's what the Post article reported. However, the key in that sentence is "which organizers said." As such, this is what the people involved in the rally told the Post, and therefore not an impartial estimate.

On the other hand, if Schultz is comfortable with rally organizers assessing crowd totals, he should have read the very next sentence in the Post piece: "Beck has estimated that 500,000 people came to his gathering."

So, Ed, if you're okay with your rally organizers' estimate of 175,000 Saturday, you should be okay with Beck's estimates for his event, right?

Don't count on it:

SCHULTZ: Now, conservatives want you to believe that Glenn Beck's phony religious revival was way bigger than the One Nation rally. Well, let me take you back to the day of the Beck rally on August 28th, 2010, at 6:32 P.M., CBS.com proved Beck's crowd was, as I said, no big shakes. "An estimated 87,000 people attended the rally organized by radio talk show host and Fox News commentator Glenn Beck Saturday in Washington, according to a crowd estimate commissioned by CBS News. The company, AirPhotosLive.com, based the attendance on aerial photos it took over the rally." Now to be fair, NBC News put the size of Beck's crowd at 300,000 people. So, somewhere in between all of this, 87,000, give or take 9 grand by that company, and 300,000 is reported by NBC. Pretty much, would you say that the size of the crowd is pretty much the same? I would. I was there. The people I saw, it was packed.

So conservatives, I want you to pay very close attention. This is what a crowd of middle-class Americans who believe in universal health care, jobs, unemployment benefits, not kicking your neighbor to the side of the road, and of course equal rights, social justice, and education for America. This is the official picture from the AP from our rally on Saturday. Packed house all the way back to the Monument. 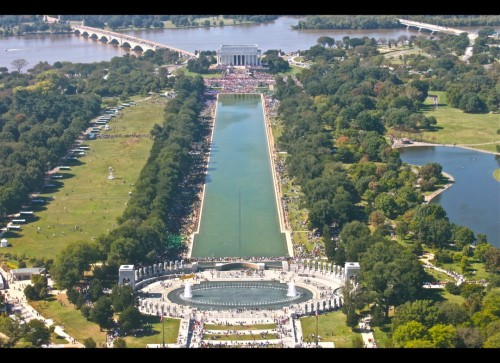 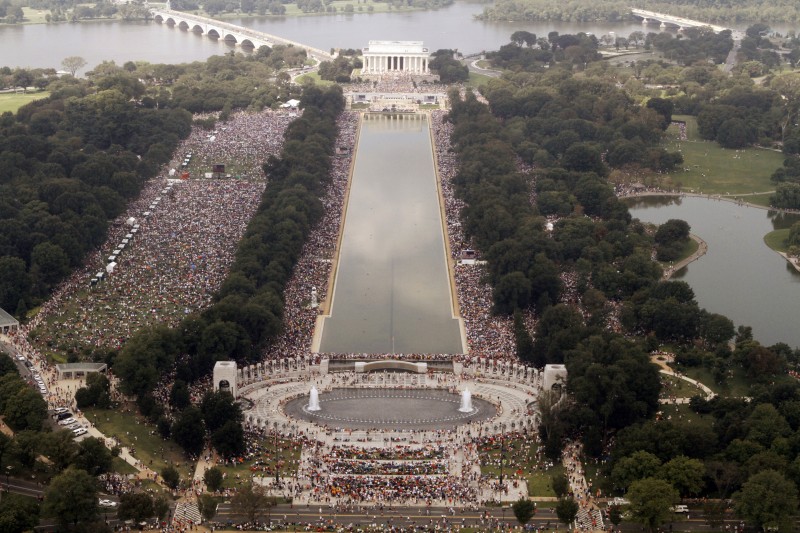 That any self-respecting cable news personality would go on national television saying that these crowds were "pretty much the same" is absolutely deplorable.

That his employers would tolerate it without disciplinary action is a disgrace to the industry.

Yet, it got even worse, for about 35 minutes later, Schultz got into a fight with Republican strategist Ron Christie about the crowd size.

NBC, General Electric, and Comcast must be so proud.