Stephen Colbert to Testify to Congress About Illegal Immigration 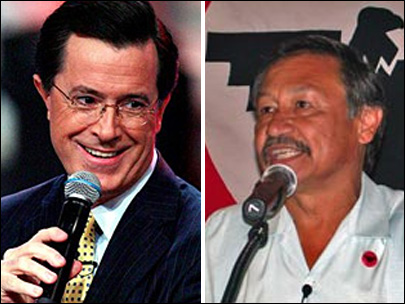 Comedy Central star Stephen Colbert will be testifying before Congress this Friday about, of all things, illegal immigration.

No, this apparently isn't a joke.

According to the Daily Caller, the comedian "is slated to testify at a congressional hearing Friday on immigration titled 'Protecting America's Harvest.'"

UFW works to legalize the millions of illegal immigrants working in the agriculture sector, and Rodriguez promoted one of their projects, "Take Our Jobs" which offers Americans the chance to try working in the fields if they really think good jobs are being lost to illegals. [...]

Since then Colbert reportedly participated in Take Our Jobs, and Rep. Zoe Lofgren, chairman of the immigration subcommittee, was there for that day.

Sources said the plan for Colbert to testify arose out of Colbert and Lofgren sharing that day together.

For the record, CBS News has confirmed Strong's report.

So actor Kevin Costner testified to Congress in July about the BP oil spill, and now Colbert gets to give his views on illegal immigration.

As comedian Yakov Smirnoff said years ago, "America - what a country!"

For those interested, this was the "Colbert Report" in question: