Limbaugh to J-Lister's Death Wish Apology: 'Want to Watch Me Die? Say It!' 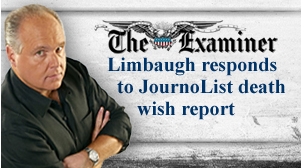 Rush Limbaugh on his program Thursday commented on public radio producer Sarah Spitz's apology for wishing ill of him on the liberal JournoList.

"Why is she gonna apologize?" asked the conservative talk show host. "You want to watch me die, Sarah? Say it!"

As NewsBusters reported Wednesday, the Daily Caller's Jonathan Strong published some more of the liberal group's e-mail messages which included Spitz claiming she would "Laugh loudly like a maniac and watch his eyes bug out" as Limbaugh writhed in torment.

Later that day, NPR and Spitz apologized, with the former making it clear that she was never on its payroll.

On Thursday, with pressure from his fans, Limbaugh responded as only he can:

This bores me as well, this whole concept of forcing people to apologize for things they meant to say. Why is she gonna apologize? She meant to say it, she wrote it, stand by it. You want to watch me die, Sarah? Say it! Where are your guts? Well, she's "apologized." [...]

I always love it when these people get a dose of their own medicine because they can't take it...She said it, she wrote it, she stood by it. Why apologize? Sarah, this is where you people just flummox me. You wrote it. You meant it. Stand by it. She apologizes to "anyone I may have offended and I regret these comments." She doesn't regret 'em, and she hasn't apologized to me. She just apologized to anybody she "may have offended," but why apologize in the first place? She's buckling to pressure. She meant to say it. [...]

Everybody on that website, in that listserv, meant everything they wrote. It's just fascinating to see they don't have the guts to stand by it. So that's my reaction. If you want to know what I think about it, that's it..."That's not who I really am." You know, "That's not the person I am." Bull! It is who you are! You are a commie! You are a full-fledged Marxist liberal! You do wish I was dead. It is who you are. [...]

What, did somebody steal your personality for a day and grab hold of your hands and start typing on your keyboard and it wasn't you? "This is not who I am. I want everybody to know, as a publicist I understand and this is not who I am." It is who you are! This is one of the big problems we have in this country: People don't have the guts to be who they are and stand up for who they are and admit what they really are, especially under fire. "Oh, that wasn't me. I don't know what happened there! We were just hanging around with a bunch of like-minded people and then you saw it, and that means 'that's not who I am.'" I bet the other people in this group are a little upset she's apologizing.

Actually, I bet virtually every liberal in America - in and out of the media - is upset she's apologizing.