Were McChrystal and Staff Talking Off The Record to Rolling Stone? 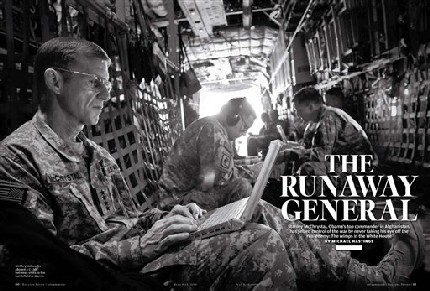 In the midst of this week's Gen. Stanley McChrystal controversy, a possibility concerning statements allegedly made by him and his staff has largely gone overlooked: might they have been speaking off the record when they were around Rolling Stone's Michael Hastings?

This certainly would explain some of the bizarre comments allegedly made by military members knowing full well how the chain of command works and that the President is clearly at the top.

On Friday, however, officials close to McChrystal began trying to salvage his reputation by asserting that the author, Michael Hastings, quoted the general and his staff in conversations that he was allowed to witness but not report. The officials also challenged a statement by Rolling Stone's executive editor that the magazine had thoroughly reviewed the story with McChrystal's staff ahead of publication. [...]

A senior military official insisted that "many of the sessions were off-the-record and intended to give [Hastings] a sense" of how the team operated. The command's own review of events, said the official, who was unwilling to speak on the record, found "no evidence to suggest" that any of the "salacious political quotes" in the article were made in situations in which ground rules permitted Hastings to use the material in his story.

A member of McChrystal's team who was present for a celebration of McChrystal's 33rd wedding anniversary at a Paris bar said it was "clearly off the record." Aides "made it very clear to Michael: 'This is private time. These are guys who don't get to see their wives a lot. This is us together. If you stay, you have to understand this is off the record,' " according to this source. In the story, the team members are portrayed as drinking heavily. [...]

A U.S. military spokesman in Kabul, Air Force Lt. Col. Edward T. Sholtis, acknowledged that Hastings, like other reporters who have interviewed McChrystal over the past year, was not required to sign written ground rules. "We typically manage ground rules on a verbal basis," Sholtis said. "We trust in the professionalism of the people we're working with."

So, you've got husbands and wives in a Paris bar celebrating McChrystal's 33rd wedding anniversary, and comments made during the event -- which were supposed to all be off the record -- became part of Hastings' piece.

Obviously, Rolling Stone thinks it is:

The executive editor, Eric Bates, denied that Hastings violated any ground rules when he wrote about the four weeks he spent, on and off, with McChrystal and his team. "A lot of things were said off the record that we didn't use," Bates said in an interview. "We abided by all the ground rules in every instance."

But this isn't the only beef McChrystal supporters have with this piece:

Officials also questioned Rolling Stone's fact-checking process, as described by Bates in an interview this week with Politico. "We ran everything by them in a fact-checking process as we always do," Bates said. "They had a sense of what was coming, and it was all on the record, and they spent a lot of time with our reporter, so I think they knew that they had said it."

In an interview Friday, the managing editor, Will Dana, said the reporter's notes and factual matters were exhaustively reviewed.

But 30 questions that a Rolling Stone fact-checker posed in a memo e-mailed last week to then-McChrystal media adviser Duncan Boothby contained no hint of what became the controversial portions of the story. Boothby resigned Tuesday.

In the e-mail, a copy of which was provided to The Washington Post by a military official sympathetic to McChrystal, Boothby is asked to confirm the makeup of McChrystal's traveling staff on the Paris trip and the communications equipment they brought with them on an earlier visit to London. "They don't come close to revealing what ended up in the final article," the official said.

This all raises an interesting question that seemed to elude mainstream media as they quickly attacked the General probably forcing Obama to relieve him of his command: did the Rolling Stone break some journalism rules with this report?

As NewsBusters' Tim Graham pointed out Thursday, this is a FAR-LEFT magazine with strong anti-war convictions.

Is it indeed possible that much of the truly damning comments were made to Hastings off the record, and that he and his editors in their zeal to tear down McChrystal just didn't care?

Is it also possible that the magazine didn't go through proper fact-checking procedures before it published the piece?

If the answer to both questions is "Yes," then maybe media quickly overreacted to this article before weighing and investigating such possibilities thereby making them complicit in ruining the General's career while also conceivably endangering the mission in Afghanistan.

This is certainly not to say that any of these comments were appropriate irrespective of whether or not those making them believed they were speaking off the record.

Regardless of the setting, the General commanding our troops in Afghanistan certainly shouldn't have been party to such statements assuming he was aware they were being made.

But that doesn't exempt Hastings from adhering to the off-the-record status of such commentary if indeed there was a request for that to be the case.

As the Post has now let this cat out of the bag, it will indeed be interesting to see how this matter is handled on the Sunday talk shows tomorrow as well as in the coming days.