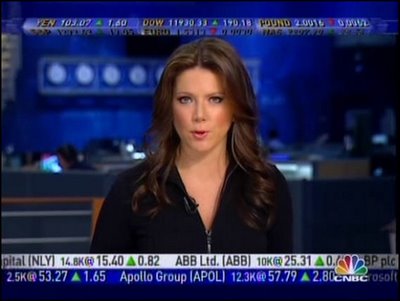 Nice thing to ask an Emmy-nominated 37-year-old mother of two, wouldn't you agree?

Yet that wasn't even the worst of Bess Levin's questions (Levin in bold, h/t TVNewser):

Question number 2: How do you feel you measured up next to Mandy and her assets?

I think I held my own.

For those that don't watch CNBC, Amanda Drury was originally brought over from CNBC Asia to fill in for Melissa Francis who was going on maternity leave.

When Levin asked about Mandy's "assets," she wasn't referring to her stock portfolio if you catch my drift. As such, Regan was being questioned about how her bra size compared with Drury's.

Seem a little childish to you? Wait. It gets worse:

Question number 3: If you had to: Charlie Gasparino or Dennis Kneale? Killing yourself is not an acceptable answer.

I think I would have to kill myself. Or be on life-support.

And then? Who would it be?

You think it would still be appealing for them?

Dennis Kneale and Charlie Gasparino? Yes, one of them would definitely still go for it, if not both.

Question number 4: Just so we can be fair, in that same vein, if you had to get down and dirty with one of the anchorettes on CNBC, whom would you choose?

See this question is just as hard as the last but for the opposite reason. I'm not into women but if I were it would be really difficult. We have a lot of beautiful ladies at CNBC.

Add it all up, and at the end of an interview -- with a woman! -- besides being questioned about how her breasts compared to a co-worker's, Regan was asked: how she feels about young men wanting to have sex with her; which guy on her network she'd like to have sex with, and; which woman.

All of this raises a number of questions such as what is this Dealbreaker, and why would a serious journalist want to have anything to do with it?

Fortunately, fashion magazine Elle did an article on Levin in April offering us some insights:

The 25-year-old editor of Dealbreaker.com, the financial industry's online tabloid that reports on corporate scandals and insider gossip, some of which she overhears at happy hour in the finance world's watering holes, has become a mustread on Wall Street. Posting nine times a day, she's been known to scoop the mainstream business media and retains a fiercely loyal following who seem to have an infinite appetite for her biting, off-kilter commentary about the money business- you don't see The Wall Street Journal running headlines like "Neil Barofsky Will Cut a Bitch" or "Spotted: Ruth Madoff Getting Her Tan On." [...]

Dealbreaker, which draws 300,000 unique visitors a month, has posted hedge funds' for-investor-eyes-only marketing materials, which three years ago sparked a lawsuit that named Levin and Dealbreaker's publisher; they later settled. During the Bank of America and Merrill Lynch merger last year, Merrill employees depended on Levin to report what their company wasn't telling them.

Because of someone else's car accident and a physics-class coincidence, Bess Levin is the most important young Wall Street blogger in the country. [...]

But Dealbreaker has a certain crackle-a taste for picking out and serving up the day's fascinating little nuggets of finance news. It's a must-read.

Clearly, she gets a kick out of poking holes in the pompous image of Wall Street professionals, to the delight of journalists who don't have the same cleverness -- or freedom -- to write like her. [...]

The media universe embraces Levin as a symbol of the Really New Journalism (sorry, Tom Wolfe), someone whose job description is to lampoon the establishment and entertain the masses with both biting and good-natured sarcasm. [...]

Levin has a knack for writing irreverent, witty and insightful stuff. But what makes proudly hard-bitten journalists look at her in something approaching awe is her precocious age. Levin is not too far removed from attending Amherst College or, even high school in suburban New Jersey.

That seems like part of the attraction. But Friedman made a more salient observation:

Much of Levin's success results from the states of the journalism and Wall Street landscapes. The rise of the Internet has attracted a large number of young readers who would sooner dig a ditch than buy a newspaper or a magazine at a newsstand.

This situation has forced the nation's once-stodgy media companies to dig deep to tape [sic] young, adventurous writers, who are at home on the Web and can communicate with their peers.

It's certainly not for the exposure, as despite Elle's fawning, 300,000 unique reads a month is nothing; NewsBusters typically does over 5 million.

As for the whole peer thing, one doesn't imagine Regan at 37, and a member of the Council on Foreign Relations, views Levin as her contemporary.

With this in mind, although Dealbreaker devotees might have loved these sex-related questions -- according to Levin, they came from readers -- I'm having a hard time understanding why the seemingly conservative Regan put herself in this position.

Isn't this degrading to women looking to be taken seriously in the business world and not be treated as sex objects? Or is this the state of modern feminism?

As for Levin, who clearly must be doing something right given her glowing reviews, one has to wonder why someone of her intellectual capacity feels the need to occasionally wander into the gutter.

If she really has the eyes and ears of hedge fund managers and financial sector CEOs, can't she keep their attention without the smut?

As the father of a sixteen-year-old girl, I certainly hope so.