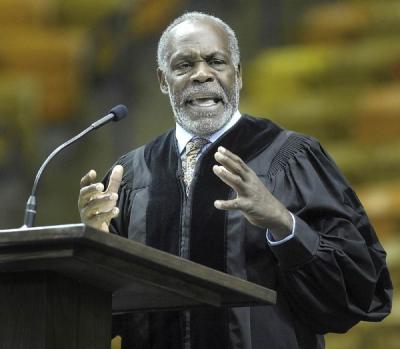 Outspoken actor Danny Glover was booed on Saturday for, amongst other things, not putting his hand over his heart during a flag ceremony prior to his commencement address at Utah State University.

As reported by the Salt Lake Tribune:

During the color guard presentation of the American flag, a spectator yelled across the Dee Glen Smith Spectrum, "Put your hand above your heart, Glover!"

Not surprisingly, Glover said he doesn't typically show what most consider appropriate respect to the flag during such ceremonies, and he doesn't see anything wrong with it (h/t Weasel Zippers):

"I was listening to the national anthem and paying attention," he said. "I probably wasn't the only one in there who didn't put a hand over their heart."

The intermittent booing throughout the graduation, which was largely overpowered by clapping and cheering, didn't appear to rattle the stage and big-screen star. In his public comments and actions, Glover never acknowledged the behavior dozens of fresh graduates called "stupid," "rude" and "disrespectful." Ultimately, Glover was rewarded with a standing ovation by the majority of the large crowd.

He said he had been booed before. "People have problems sometimes with what I believe and who I talk to," Glover told The Tribune . "I try to respect people, honor them."

He's a fine ambassador for American values, isn't he?

But here's the truly delicious punch line: Glover on Saturday was given an honorary degree by the University for -- wait for it! -- Doctor of Humane Letters.

Honestly, you can't make this stuff up!