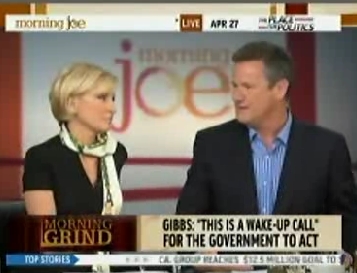 It does offend me that when one out of every three citizens in the state of Arizona are Hispanics, and you have now put a target on the back of one of three citizens who if they're walking their dog around a neighborhood, if they're walking their child to school, and they're an American citizen or a legal, legal immigrant, can now put a target on their back and make them think every time they walk out of their door, they may have to prove something.

Unfortunately, he didn't stop there (video follows with transcript and commentary):

JOE SCARBOROUGH, HOST: It does offend me that when one out of every three citizens in the state of Arizona are Hispanics, and you have now put a target on the back of one of three citizens who if they're walking their dog around a neighborhood, if they're walking their child to school, and they're an American citizen or a legal, legal immigrant, can now put a target on their back and make them think every time they walk out of their door, they may have to prove something. I will tell you that is, that is, that is un-American. It is unacceptable and it's un-American.

Well, here's the pertinent portion of the law:

· Prohibits law enforcement officials and law enforcement agencies of this state or counties, municipalities and political subdivisions from restricting or limiting the enforcement of the federal immigration laws to less than the full extent permitted by federal law.

One of the keys here is "lawful contact." As Byron York reported Monday:

What fewer people have noticed is the phrase "lawful contact," which defines what must be going on before police even think about checking immigration status. "That means the officer is already engaged in some detention of an individual because he's violated some other law," says Kris Kobach, a University of Missouri Kansas City Law School professor who helped draft the measure. "The most likely context where this law would come into play is a traffic stop."

As such, Scarborough's concern that someone "walking their dog" or "walking their child to school" might be stopped to prove they're in America legally is a common misconception concerning this law, but not one someone like him should hold.

Another issue is "reasonable suspicion" which, as it pertains to fighting crime, has been supported by the Supreme Court for over forty years.

As LegalZoom.com explains, "Reasonable suspicion is defined by a set of factual circumstances that would lead a reasonable police officer to believe criminal activity is occurring."

A perfect example of the application of "reasonable suspicion" is present in the Supreme Court-approved practice known as "Stop and Frisk."

According to Legal Dictionary:

One of the most controversial police procedures is the stop and frisk search. This type of limited search occurs when police confront a suspicious person in an effort to prevent a crime from taking place. The police frisk (pat down) the person for weapons and question the person.

A stop is different from an arrest. An arrest is a lengthy process in which the suspect is taken to the police station and booked, whereas a stop involves only a temporary interference with a person's liberty. If the officer uncovers further evidence during the frisk, the stop may lead to an actual arrest, but if no further evidence is found, the person is released.

Though police had long followed the practice of stop and frisk, it was not until 1968 that the Supreme Court evaluated it under the Fourth Amendment's protection against unreasonable searches and seizures. Under Fourth Amendment case law, a constitutional Search and Seizure must be based on Probable Cause. A stop and frisk was usually conducted on the basis of reasonable suspicion, a somewhat lower standard than probable cause.

In 1968 the Supreme Court addressed the issue in Terry v. Ohio, 392 U.S. 1, 88 S. Ct. 1868, 20 L. Ed. 2d 889. In Terry an experienced plainclothes officer observed three men acting suspiciously; they were walking back and forth on a street and peering into a particular store window. The officer concluded that the men were preparing to rob a nearby store and approached them. He identified himself as a police officer and asked for their names. Unsatisfied with their responses, he then subjected one of the men to a frisk, which produced a gun for which the suspect had no permit. In this case the officer did not have a warrant nor did he have probable cause. He did suspect that the men were "casing" the store and planning a Robbery. The defendants argued the search was unreasonable under the Fourth Amendment because it was not supported by probable cause.

The Supreme Court rejected the defendants' arguments. The Court noted that stops and frisks are considerably less intrusive than full-blown arrests and searches. It also observed that the interests in crime prevention and in police safety require that the police have some leeway to act before full probable cause has developed. The Fourth Amendment's reasonableness requirement is sufficiently flexible to permit an officer to investigate the situation.

As the New York Times reported on February 11, stop and frisks are amazingly common in New York City:

And last year's tally of 531,159 stops - up from 468,932 in 2007 - already represents the most voluminous amount of stops in any 12-month period in the years since the Police Department began reporting the data.

Again -- all based on "reasonable suspicion."

With this in mind, media representatives should really study this law and what "lawful contact" and "reasonable suspicion" mean before spouting non sequiturs concerning what's going on in Arizona.

Read the Arizona law. Parts of it are word-for-word the same as the federal statutes which continue to be all but ignored.

Indeed. Sadly, many media members don't bother reading what they report on. If they did, Congress likely wouldn't have been able to pass ObamaCare earlier this year.

NewsBusters' Mark Finkelstein assisted in the creation of the video as well as the research associated with this piece.