Jon Stewart Bashes CPAC As 'This Year's Festival of Whites' 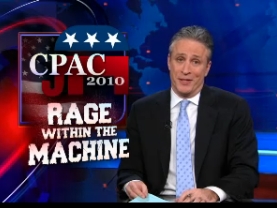 Comedian Jon Stewart on Monday bashed the just-concluded Conservative Political Action Conference by calling it "this year's Festival of Whites."

The "Daily Show" host devoted two segments to the conservative gathering going after many of the presenters including former Vice President Dick Cheney and former Massachusetts governor Mitt Romney.

But the real target of Stewart's disaffection was Fox News's "Glenn Beck and his magical erasable truth board" (videos embedded below the fold with commentary, h/t Story Balloon):

In the second segment, Stewart tried to make the case that Beck was a hypocrite for being against "progressivism" despite reading books at the public library. In Stewart's view, public libraries were created by "progressives":

Actually, no. Public libraries go back to Roman times. In the 1800s French philanthropist Alexandre Vattemare used his fortunes to create the first international exchange of items between libraries and museums. He was actually one of the original founders of the Boston Public Library.

But even before then, according to the liberal-leaning Wikipedia:

As the United States developed from the 1700s to today, growing more populous and wealthier, factors such as a push for education and desire to share knowledge led to broad public support for free libraries. In addition, money donations by private philanthropists provided the seed capital to get many libraries started. In some instances, collectors donated vast book collections

As it pertains to the Boston Public Library:

In 1841, Alexandre Vattemare, a Frenchman, suggested that all of Boston's libraries combine themselves into one institution for the benefit of the public...At Vattemare's urging, Paris sent gifts of books in 1843 and 1847 to assist in establishing a unified public library. Vattemare made yet another gift of books in 1849.

Josiah Quincy, Jr. anonymously donated $5,000 to begin the funding of a new library. Quincy made the donation while he was mayor of Boston. Indirectly, John Jacob Astor also influenced the establishment of a public library in Boston. At the time of his death, Astor bequeathed $400,000 to New York to establish a public library there....In 1848, a statute of the Great and General Court of Massachusetts enabled the creation of the library. The library was officially established in Boston by a city ordinance in 1852.

Eager to support the library, Edward Everett collected documents from both houses of Congress, bound them at his own expense, and offered this collection to help establish the new library... In 1852, financier Joshua Bates gave a gift of $50,000 to establish a library in Boston.

As such, the Boston Public Library, and many others in the United States, were created with private dollars and book collections donated by philanthropists.

For Stewart to attribute this to "progressivism" was an historical revisionism on his part.

But he wasn't done, for after bashing Beck, Stewart and "correspondent" Samantha Bee offered viewers a catastrophic look into the future in a land without progressives.

Yes, Jon: all good things on this planet are due to "progressives."

Maybe you should ask some former citizens of the Soviet Union or current citizens of Cuba or Venezuela to confirm that point of view.