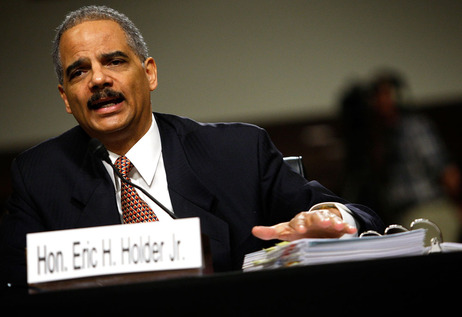 Maybe more surprisingly, NPR reported it at its website.

As NPR's Frank James noted, "The exchange started with Graham stumping Holder with a question one would have thought the attorney general would have been prepared for."

I quite agree (video embedded below the fold with partial transcript, h/t Steve Malzberg):

SENATOR LINDSEY GRAHAM, (R-S.C): Can you give me a case in United States history where a enemy combatant caught on a battlefield was tried in civilian court?

ERIC HOLDER, ATTORNEY GENERAL: I don't know. I'd have to look at that. I think that, you know, the determination I've made --

GRAHAM: We're making history here, Mr. Attorney General. I'll answer it for you. The answer is no.

GRAHAM: The Ghailani case -- he was indicted for the Cole bombing before 9/11. And I didn't object to it going into federal court. But I'm telling you right now. We're making history and we're making bad history. And let me tell you why.

Now, the real focus of this NPR piece was Graham's subsequent question concerning whether or not U.S. officials would have to Mirandize Osama bin Laden if he was captured:

GRAHAM: If bin Laden were caught tomorrow, would it be the position of this administration that he would be brought to justice?

HOLDER: He would certainly be brought to justice, absolutely.

GRAHAM: Where would you try him?

HOLDER: Well, we'd go through our protocol. And we'd make the determination about where he should appropriately be tried. [...]

GRAHAM: If we captured bin Laden tomorrow, would he be entitled to Miranda warnings at the moment of capture?

GRAHAM: Well, it does not depend. If you're going to prosecute anybody in civilian court, our law is clear that the moment custodial interrogation occurs the defendant, the criminal defendant, is entitled to a lawyer and to be informed of their right to remain silent.

The big problem I have is that you're criminalizing the war, that if we caught bin Laden tomorrow, we'd have mixed theories and we couldn't turn him over -- to the CIA, the FBI or military intelligence -- for an interrogation on the battlefield, because now we're saying that he is subject to criminal court in the United States. And you're confusing the people fighting this war.

Much as what NPR did with its piece, this bin Laden segment will likely get a lot of attention from the media in the next 24 hours, as it certainly should.

How they report Holder being stumped by the earlier question will be very interesting to see.