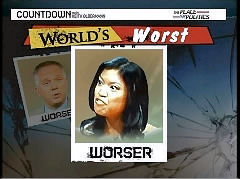 Yet that's what happened a few weeks ago when Air America's editor of news and politics took on MSNBC's Keith Olbermann for sexist and misogynistic comments he made about conservative author Michelle Malkin.

As NewsBusters' Brad Wilmouth reported on October 13, Olbermann on "Countdown" that evening called Malkin "a big mashed-up bag of meat with lipstick on it."

Olbermann starts with a recitation of Malkin's emails, belittling her voice and putting on a "Valley Girl" accent--i.e., an unintelligent female voice. But it's only after that unfortunate display of sexism that Olbermann hits it out of the misogynist park. [...]

For the record, on average, once every 24 minutes in this country, a woman does become a "mashed-up bag of meat with lipstick on it." Nearly 1.3 million American woman will be a victim of domestic violence this year, and one in four women will experience domestic violence in her lifetime.

A liberal, progressive critique of Malkin need not and should not resort to an attack on her looks or her gender or rely on silly stereotypes or imagery that brings to mind victims of domestic violence.

By attacking MIchelle Malkin's politics with an assault on women of every political persuasion, and then indicating a desire to see her physically harmed, a person might understandably get the idea that Keith Olbermann only respects women if they agree with him.

And if they don't? They're obviously just stupid Valley girls who deserve a good beating.

Wow. Amazingly, this was the second time in less than a week a far-left woman went after Olbermann, for as NewsBusters' P. J. Gladnick reported October 8, Randi Rhodes wrote quite a piece the previous day criticizing the MSNBC host for his one hour "Special Comment" about healthcare reform.

It's nice to see some people on the left becoming as sick of this man as virtually everyone on the right is.