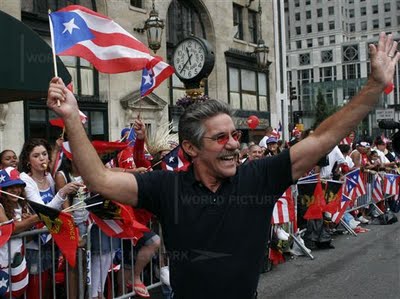 Speaking at a luncheon sponsored by El Diario La Prensa NY, Rivera disgracefully said, "Lou Dobbs is almost single-handedly responsible for creating, for being the architect of the young-Latino-as-scapegoat for everything that ails this country."

Rivera also told the audience that he had spoken to his boss, and was assured Dobbs was not coming to Fox (video embedded below the fold with partial transcript):

Wait a minute. Beyond precedent? Does Rivera have no recollection of slavery in America or the Holocaust in Germany? But I digress:

Lou Dobbs, a man who was an accomplished journalist, and who left to go and start his own venture in the digital media, having to do with space, I believe, and then came back to CNN, and nobody was watching his program. He discovered that one of the way to get people to watch was to make of the image of a young Latino trying to get into this country a profoundly negative icon. Lou Dobbs is almost single-handedly responsible for creating, for being the architect of the young-Latino-as-scapegoat for everything that ails this country. [...]

It is something that we absolutely said, "No mas" during the election of 2008...It's why Obama is elected now. He is the first, I maintain, Latino president. He's the first brown president. Why? He could be, and he looks Puerto Rican. And the, and the, the point is he would not be president but for the Latino vote and the Latino vote was for the first time in my lifetime an expression of a community understanding its responsibilities, getting up, going to the polling place, and saying, "No mas."

After all, Obama beat McCain by 8.5 million votes, but he "only" got about 4 million more Latino votes. By contrast, Obama got almost 15 million more African-American votes than McCain.

As such, claiming Latinos got Obama elected is absurd. But once again, I digress:

No more of these lies, no more of this slander, no more of this stereotyping. I can tell you proudly, when this man [Dobbs] was widely rumored to be coming to my network, I called my boss couple of weeks ago, and he said it's absolutely untrue. Lou Dobbs is not coming to Fox News. He belongs at CNN if they can justify his presence there that's their problem.