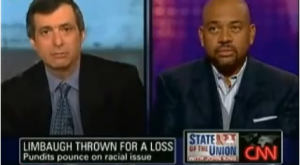 As amazing as it may seem, this was at least the second time Wilbon made this statement on national television.

Unfortunately, the person he said it to Sunday -- Howard Kurtz on CNN's "Reliable Sources" -- didn't bother challenging him about just how absurd a thing this is to say (video embedded below the fold with transcript):

KURTZ: Let me play for you something you said on "Pardon the Interruption" soon after the news broke that Rush Limbaugh was part of a team trying to buy the St. Louis Rams.

WILBON: I don't know whether Rush Limbaugh is a straight up bigot or he simply plays one on TV and radio, but he is universally reviled by black people in this country.

KURTZ: So, maybe a straight up bigot, universally reviled by black people. In retrospect, do you think you went a little too far?

WILBON: Universally reviled by African-Americans. That's no surprise. Anybody who wants to walk down any boulevard in predominantly African-American communities will find that out very, very quickly, Howie. No, that assessment is a very easy one to make.

Wow! Given the opportunity to soften his statement, Wilbon not only didn't, he reiterated it.

KURTZ: But when you say he may be a straight up bigot, you're saying he doesn't like black folks.

WILBON: He may be. I mean, if you listen to what he says on his show -- and I stopped a long time ago, and I can't tell you specifics of what he said. Meeting him in person is one thing. I have. Communicating with him one-on-one is one thing.

His radio persona, which is all that most people have of Rush Limbaugh, particularly black people in this country, that's a different perception. And I would not back away from that comment at all.

Wow! Not back away at all.

Of course, it's not like Kurtz pressured Wilbon on this; it wouldn't have been that tough.

For instance, Kurtz could have mentioned James Golden aka Bo Snerdley, the long-time call screener for Limbaugh's program who happens to be African-American and made quite a statement in support of Limbaugh on Friday's program.

Kurtz could also have brought up what black sportswriter Stephen A. Smith said in Limbaugh's defense last Saturday. Or what National Public Radio's Juan Williams has said about this controversy.

Kurtz could also have mentioned some of the prominent African-Americans that have been on Limbaugh's program in the past. These include Supreme Court Justice Clarence Thomas, economist Walter Williams, and former Indianapolis Colts head coach Tony Dungy.

Frankly, it would have been very easy for Kurtz to challenge this absurd comment by Wilbon, but he didn't:

KURTZ: All right. Let's talk a little bit about this alleged "slavery" comment.

Now, this was purported to have been said some years ago by Limbaugh: "Slavery built the South. I'm not saying we should bring it back, I'm just saying it had its merits."

Let me briefly run through the chronology here. This was published in a book about three years ago. It made it on to Wikipedia, the online encyclopedia, and then it was picked up once the Rams story broke by Bryan Burrwell and "The St. Louis Post-Dispatch," Drew Sharp in "USA Today," CNN's Rick Sanchez, and then you mentioned it on your ESPN program.

Again, I have met Rush. And while there's not necessarily a relationship there, we know how to reach each other. He reached out and said hey, didn't say this, do not believe it, don't know how this got started, although I'm trying to trace the origin of this statement. Don't believe that. It doesn't reflect what my beliefs are about slavery.

And I read the e-mail, e-mailed him back, and we had an exchange. Then I said I took him at his word.

I was not going to be able to sit down and verify everything that is said, because as you know, Howie, there's a lot out there that's said that is attributed to Rush. I have listened to his show. I've heard a lot of things. I'm not sitting there with a notebook writing them down.

WILBON: So, I cannot verify that he said that.

KURTZ: But in this case there's no evidence that he made this particular "slavery" comment. Do you think you should have checked before putting it on the air?

WILBON: No question. And I told Rush that. That's a journalistic no-no.

But, if I had checked and found out the information that we had basic access to every day on deadline, I might have done it anyway. Still, that's wrong and a journalistic no-no, and I said that to him.

(BEGIN VIDEO CLIP) RUSH LIMBAUGH, RADIO TALK SHOW HOST: This kind of stuff, this reporting, mal-reporting, lying, repeating the lies while also saying "Limbaugh denies," repeating the made-up quotes, the blind hatred -- and believe me, the hatred that exists in this is found in the sportswriter community. It's found in the news business.

KURTZ: Does he have a point?

WILBON: He had a point in that smaller area about that quote. Let's not make it seem like Rush Limbaugh has not insulted black people on his radio show. He's done it for years and years and years.

And it's not just black people that know that, Howie. I mean, the commissioner of the NFL, Roger Goodell, knows it. Otherwise, he wouldn't have made the statements he made.

Jimmy Irsay, owner of the Colts, he knows it. Otherwise, he would not have come out and said publicly, "I would not vote for this guy."

KURTZ: Right. But on this point -- on this point about the slavery, and there was also another alleged quote for which there is no evidence about saying something nice about James Earl Ray, I don't think it's enough to come back the next day and say, well, here's Rush's denial. I think if you don't have evidence to back it up, you need to retract it and apologize.

But let's talk about something that Rush Limbaugh did say famously.

WILBON: And by the way, I agree with you why I did that.

KURTZ: You did, but not everybody has done that. I just wanted to make that point.

Let's talk about something Limbaugh did say famously six years ago when he was briefly an ESPN commentator, and that was about Donovan McNabb. And he said, "I think the media has been very desirous that a black quarterback do well."

A lot of people pointed to that as evidence that, well, he's some kind of racist. Wasn't he really talking there about the media?

WILBON: It's his interpretation. That is not in the top 300 things that I would object to, that I would find objectionable or offensive that Rush Limbaugh has said of somebody of African-American descent. So, I mean, that was one thing that people who, in the sports context, all of a sudden were exposed to Rush Limbaugh who may not listen to his show, may not be as familiar with him, and went, wow, this seems a little off center of what we normally hear. And they held on to that.

Again, that is not probably in the top thousand things, if I can go back and chronicle the shows, that I would find offensive of his comments.

Wouldn't this have been a nice time to ask Wilbon to name some of the "thousand things" that Limbaugh has said about African-Americans that Wilbon found offensive? Wouldn't that be good journalism rather than just letting him make such a statement without having to support it?

KURTZ: Right. Well, he said a number of things over the years, inflammatory things that I disagree with. But when this whole debate erupted about, you know, was he fit to be even a minority owner in the St. Louis Rams, I'm thinking the National Football League, Michael Vick gets to go in the National Football League. There are a lot of owners and players who have done things that are not exactly stuff we heed praise on.

WILBON: I would agree with you there, Howie. My take on his whole ownership bid was this: The market will determine whether or not you wind up being an owner. And if the club you're trying to get into, if its members say, no, we don't want you, you have to live with that.

Rush Limbaugh is out there every day judging, passing judgment, turning thumbs up or thumbs down on whether somebody is fit or worthy to be involved in some activity in this country. He is subject to the same rules, if you will, in that context. And in this case, the market said no, it didn't want to sell what Rush was buying. And he has to live with that, and I would defy anybody to tell me that that's not fair.

KURTZ: But to what extent -- I've got about half a minute here -- did the media uproar over this -- and it's being debated on every cable show and every sports radio show -- contribute to a climate where the NFL just felt it could not touch Rush with a 100-foot football field?

KURTZ: Couldn't let him on the football field, I should say.

WILBON: Plenty, Howie, just like he helps -- remember, Rush is the media. Rush is mainstream media. So, just like any other debate, Rush and his conversation on his show contributes to that same sort of...

KURTZ: And he loves to stir up controversy.

WILBON: Yes, he does. That's what I'm saying. You can't all of a sudden say, wait a minute, I'm outside of controversy, when you help create it every day, and very successfully and very smartly, by the way, for those who listen to Rush's show. No, you can't then say the rules don't apply to me.

I don't think, to be fair, that Rush is saying that. In our conversation, that that was not what I sensed. So he, again, put himself out there, subject to national debate, and the debate said no, we don't want it.

Yes, but in the end, a big part of the debate included misinformation and fabricated quotes that Limbaugh never said. Is that part of the rules as far as Wilbon is concerned?

After all, this wasn't just about a high-profile, controversial figure being highly-scrutinized. This was someone who ended up being on the receiving end of a smear campaign filled with lies and half-truths. That's a completely different thing.

Unfortunately, Kurtz didn't press Wilbon on this either:

Well, the St. Louis rams story is over, but the controversy very certainly is not.

Mike Wilbon, thanks very much for joining us.

Yeah, thanks -- for tossing me softballs and not making me look like an idiot.

Nice job, Howie. You should be very proud of this interview.