SNL: Obama Will Even Go On The Food Network...But Not Fox News! 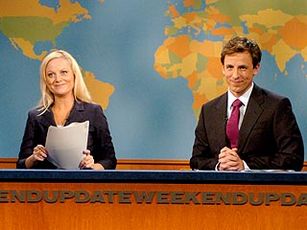 On Thursday, NBC's "Saturday Night Live" spin-off "Weekend Update Thursday" mocked President Obama as being willing to discuss healthcare reform on virtually any cable channel that will have him -- except, of course, Fox News.

Although the opening skit did poke fun at FNC's Glenn Beck, the real joke was that the President, having just done Sunday interviews on ABC, CBS, CNN, NBC, and Univision, wanted to "get the healthcare message out to as wide an audience as possible. I don't want to shut anyone out of this debate."

After that statement, Fred Armisen playing Obama sat down with representatives from ESPN, Bravo, MTV, The Food Network, and even a teenage vampire from The CW, but continually said "No" to meeting with anyone from Fox News (video embedded below the fold):

So, were the producers supporting the President's decision to boycott Fox last Sunday, or rightfully pointing out how absurd it was?

In Fox's words, we report, you decide.

Post facto thought: it's going to be very interesting to see how Obama gets covered by SNL this season.

Toward the end of the last season, despite all the discussion about comedy writers being uncomfortable lampooning the new president, SNL did start bucking the trend a tad.

Given his plummeting popularity, this could -- I emphasize could -- be a turning point in his presidency.

As Gerald Ford, Jimmy Carter, and Sarah Palin know all too well, a contentious SNL can be very bad for one's political career.

Will SNL take off the gloves and set its sights on the suddenly stumbling, bumbling President?

As Ed Hart used to say, we will know in the fullness of time.