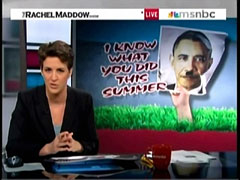 Since the Tea Parties began and the anti-government sentiment boiled over into town hall meeting protests, a consistent media meme has been that some of the signs present as well as the rhetoric have been inciting violence against Barack Obama.

As my colleague Geoffrey Dickens previously reported, MSNBC's Chris Matthews Tuesday actually warned talk radio hosts that they would pay if anything actually happens to the President.

With this in mind, Paul Williams created a marvelous video essay using the audio of Maddow's program that day with an overlay of pictures and footage of demonstrations when George W. Bush was president.

The result is an extraordinarily powerful demonstration of how hypocritical the current liberal media position is concerning this matter (video embedded below the fold with partial transcript, h/t Political Integrity Now):

Right wing media deliberately and systematically invoking both Nazism and political assassination; hostile crowds consistently displaying Nazi symbolism at these demonstrations; the corporate-funded anti-reform movement using Hitler as a rhetorical weapon against the president and against Democrats in Congress -- it`s scary, of course, if they don`t understand the implications of their actions. And it`s much, much scarier, still, if they do.

Joining us now is Frank Schaeffer. He`s the author of "Crazy for God: How I Grew Up As One of the Elect, Helped Found the Religious Right, and Lived to Take All or Almost All of It Back."

Mr. Schaefer, thank you so much for coming back on the show tonight.

FRANK SCHAEFFER, AUTHOR, "CRAZY FOR GOD": Thanks for having me on, Rachel.

SCHAEFFER: Yes, I do. In fact, this rings a big bell with me because my dad, who was a right-wing evangelical leader, wrote a book called "A Christian Manifesto" that sold over a million copies. And in that book, he compared anybody who was pro-abortion to the Nazi Germans and he said that using violence or force to overthrow Nazi Germany would have been appropriate for Christians, including the assassination of Hitler. He compared the Supreme Court`s actions on abortion to that and that has ban note that has been following the right-wing movement that my father and I helped start in evangelical context all the way.

So, what`s really being said here is two messages. There is the message to the predominantly white, middle-aged crowd, the people screaming at these meetings, trying to shut them down. But there`s also a coded message to what I would call the "looneytunes," the "fruitloops" on the side.

It`s really like playing Russian roulette. You put a cartridge in the chamber, you spin, and once in a while it goes off. And we saw that happen with Dr. Tiller. We`ve seen it happen numerous times in this country with the violence against political leaders whether it`s Martin Luther King or whoever it might be. We have a history of being a well- armed, violent country.

And so, really, I think that these calls are incredibly irresponsible. The good news is that it shows a desperation. The far- right knows they have lost. They`ve lost the hearts and minds of most American people, for instance, who want health care.

But they also know they have a large group of people who are not well-informed, who listen to only their own sources, who buy the lies, for instance, all this nonsense about euthanasia being mandatory and all the rest of it, and these people can be energized to go out and do really dreadful things. And we`ve seen it in front of abortion clinics. I`m afraid we`re going to see it with some of our political leaders.

And the Glenn Becks of this world literally are responsible for unleashing what I regard as an anti-democratic, anti-American movement in this country that is trying to shut down legitimate debate and replace it with straight out intimidation. It is ironic they`re drawing a parallel to Hitler.

I wouldn`t draw such a parallel, but I would draw a parallel to the Brown Church (ph) of 1930s who got into a habit of shutting down dissent and making it look as if they had a majority by spreading out in groups just as these folks do, screaming the loudest and making debate impossible.

So, these are very, very bad signs and I`m not at all optimistic about how this is going to end in terms of violence, although I do think Obama is going to win the day in terms of most Americans.

The problem is, we`re not talking about most Americans, we`re talking about a small, angry group of white people who to -- you know, to paraphrase Bart Simpson, the election broke their brains. They`re angry. And they are ready to do just about anything to stop the process at this point because they`d rather see us all lose than admit defeat.

SCHAEFFER: That`s where they`re at.

MADDOW: . one of the reasons that I wanted to talk to you about this tonight is because what you describe as the potential that this could be a coded message. What we`re seeing here is vituperative language like this from some members of Congress, from some people who are considered to be relatively mainstream, within conservative politics.

But we`re also seeing it from movement organizers, from people who are organized, like this Americans for Prosperity group. It`s a very well- connected group. We have the president of that organization on the show last night. He`s a former political strategist partner of Ralph Reed. He`s up in the Jack Abramoff scandal. I mean, these people who are -- he was the campaign strategist for George Bush`s primary campaign for president in 2000 -- these are people who are very much linked into the conservative movement.

And so, what I`m trying to get down to is the question of whether or not this is a deliberate coded message, whether this is sort of a dog whistle that`s going out on the right by using specific language about Nazism, it is a specific call for violence?

SCHAEFFER: Yes, I would like to just say this and I know this may come off as a little harsh to people, but I honestly think that there is a type of white middle-aged American male, I`m a white-middle aged -- well, I wish I was middle-aged, I`m over middle age -- but a white male about my age who has had a kind of mental collapse. I mean, you look at the way they went after Sotomayor and called her a racist. You look at them now using all these foundations and these groups, lobbyists and others pouring millions of dollars from the insurance industry and stirring up misinformed, right-wing white people, not terribly bright people, the sort of people who are yelling at these meetings.

There is a coded message here. And that is that you have a group of people who like Rush Limbaugh would rather see the president and the country fail, and their coded message to their own lunatic fringe is very simple -- and that is go for broke.

When you start comparing a democratically-elected president, who is not only our first black president but a moderate progressive, to Adolf Hitler, you have arrived at a point where you are literally leading -- leaving a loaded gun on the table, saying the first person who wants to come along and use this, go ahead. Be our guest.

Now, all these people, when something bad happens, will raise their holy hands in horror and say, of course, we didn`t mean that. We were just talking about being Americans. It`s American to protest.

B.S. They know exactly what`s out there. There is a whole public there who went out and stopped up on ammunition and guns thinking Obama would take away their weapons. One such person shot down three policemen in Pittsburgh. I`d like to know exactly what Glenn Beck and FOX News will say the morning after someone takes a shot at our president or kills a senator or congressman.

And if it`s one of the people who we find a little note in their car or the literature or their television watching habits whose tied to these people who are stirring the pot, or tied to these foundations that people, like Dick Armey, are running, trying to use insurance company money to make look this fake grassroots movement then -- then we`ll see what happens. But at that point we`ll be in a new zone and it`ll be too late.

So, my warning to my old friends on the right and those who read my book, "Crazy for God," knows that without the work of my father, Dr. C. Everett Koop and myself, there would have been no pro-life movement, no religious right to be fomenting these things from, it`s the same cast of characters. I came to a place in my life when I realized I had made a big mistake.

Now, we`ve crossed a line into which hate and vitriol have gone to a point where it is anti-democratic and anti-American. These people do not want America to succeed. They would rather see our system go down than have a black president, someone with different political views, someone appointing people like Sotomayor, Hispanic people, women and others. And we have arrived at a point where enough is enough.

So, these people are hatemongers, and they are distributing a kind of information on two levels. One the lies about the health care system requiring euthanasia and all this nonsense, but on another level, as I say leaving a loaded gun on the table, they`re calling our president Hitler, they`re spreading this rhetoric, they`re spreading these lies.

It isn`t just a question of being bad journalists anymore. These are bad Americans, and they are putting all of us at risk.

MADDOW: Frank Schaeffer, author of "Crazy for God" -- thank you very much for coming on the show. Mr. Schaeffer, we really appreciate your insight. Thanks.