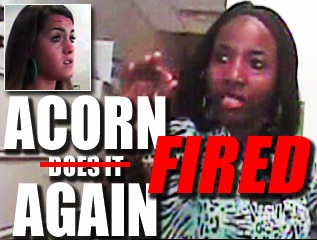 You would think videos exposing representatives of the controversial organization ACORN giving advice on how a couple can get a loan to set up a brothel would be BIG NEWS.

Such would seem especially the case if the proposed house of ill repute would be employing minors illegally smuggled across the border from Central America.

The boycott continued even after several ACORNers were fired as a result (sting videos embedded below the fold):

Bucking the boycott trend were the Washington Post, the Associated Press, CNN, and Fox News. ABC's Jake Tapper also wrote about this at his Political Punch blog (h/t Paul Chesser).

Not surprisingly, one of the people to report this on Thursday was Fox News's Glenn Beck who opened his program that day:

BECK: Tonight -- these are the things that you have to ask yourself. I have other things going on in the chalkboard. But you have to ask yourself these three questions -- one, how does the media sleep at night? When you see the story that broke this morning, and can you tell me how many hits has this story received on CNN, MSNBC or any other network?

BECK: Zero. Zero. How do you sleep at night, media?

How do they sleep, indeed.

Later in the program, Beck marvelously said the following:

This is criminal what the media is doing right now. And all of you in the media, every single one of you, you should be ashamed of yourself -- ashamed.

This story broke early this morning. FOX News has been on it all day. The other networks, the other journalists -- zero. In fact, I have the only ones that are on it, the "National Review Online," "The Wall Street Journal," WBAL Radio, and FOX. Whoa! It's not like there's a big -- it's not like your tax dollars are going to fund ACORN. No, why cover that?

After all, in the summer and fall of 2006, America's media on a daily basis harped on the word "macaca" as well as electronic messages sent to male pages by a little known Florida Congressman.

Now, three years later, an organization with close ties to the President of the United States had to fire several of its representatives for giving business advice to a couple looking to import under-aged girls to be used as prostitutes, and these same news outlets couldn't care less!

How DO YOU sleep at night, MEDIA?

Readers are advised that transcripts from Friday evening broadcasts might not be available yet and therefore might not have surfaced in a LexisNexis search.