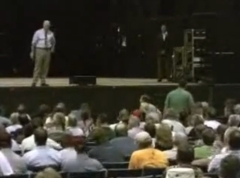 "What we're seeing right now is close to Brown Shirt tactics. I mean that very seriously."

On Tuesday, at such a political gathering in Vancouver, a Marine Corps veteran named David William Hedrick blasted the Congressman for this disgraceful depiction.

What follows is a video from this town hall meeting in Washington state that every person in America -- especially those on the Left and their media minions who continue to shamefully besmirch average citizens for having the nerve to oppose the government takeover of healthcare!!! -- should be required to view (h/t HotAirPundit via Hot Air):

"I, David William Hedrick, a member of the silent majority, decided that I was not going to be silent anymore. So, I let U.S. Congressman Brian Baird have it. I was one questioner out of 38, that was called at random from an audience that started at 3,000 earlier in the evening. Not expecting to be called on, I quickly scratched what I wanted to say on a borrowed piece of paper and with a pen that I borrowed from someone else in the audience minutes before I spoke. So much for the planned talking points of the right wing conspiracy."

For the record, Washington's Columbian reported on August 6:

Over 10 years in Congress, U.S. Rep. Brian Baird has stayed tethered to his district, flying back to Southwest Washington for more than 300 sometimes-bruising town hall meetings during Congressional recesses.

But this year, he's literally decided to phone it in.

Instead of appearing in person, where "extremists" would have "the chance to shout and make YouTube videos," Baird said Wednesday, he's holding what he calls "telephone town halls" instead.

Baird said he's using the new system because he fears his political opponents may be planning "an ambush" to disrupt his meetings, using methods Baird compared to Nazism.

"What we're seeing right now is close to Brown Shirt tactics," Baird, D-Vancouver, said in a phone interview. "I mean that very seriously."