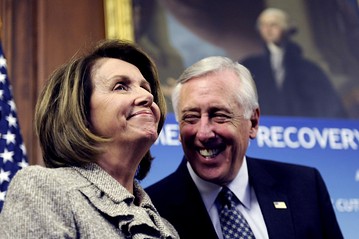 Drowning out opposing views is simply un-American. Drowning out the facts is how we failed at this task for decades.

As NewsBusters reported Monday, a liberal advocacy group called Health Care for America Now published a playbook last Tuesday with the following instructions for its members to counter "the 'tea-bagger' protesters and right-wing activists" showing up at town hall meetings from coast to coast:

Their side will be smaller but noisier. You must bring enough people to drown them out...

Well, it turns out that Hoyer is listed at HCAN's website, along with roughly 200 other members of Congress, as supporting this organization:

Why haven't media pointed out this glaring hypocrisy?

I have a memo from SEIU Local 2001 (the same Conn. district where the original MacGuffie memo originated), which cannot be misunderstood. It was issued this week in preparation for Rep. Jim Himes' town hall in Stamford, Conn.

It's still up, but I did a screen shot, in case it disappears. Here's the announcement:

Action: Opponents of reform are organizing counter-demonstrators to speak at this and several congressional town halls on the issue to defend the status quo. It is critical that our members with real, personal stories about the need for access to quality, affordable care come out in strong numbers to drown out their voices.

Perhaps Pelosi should check with her allies about their tactics before labeling them "un-American" in the future.

Indeed. I guess you could say that Pelosi and Hoyer were FOR drowning out opposing views before they were against it.

Wouldn't it be nice if so-called journalists in America would point this out to the citizenry, or is that asking too much?