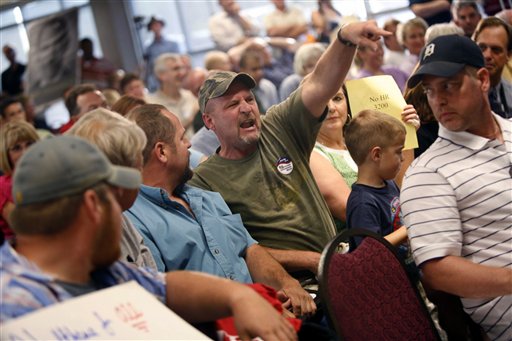 "When I watch the news people stand here and tell me that I am a member of a hired mob, that I've been called up by the Republican Party, they only wish they could have done something like this. I've never been contacted by any organized group."

So fabulously stated a caller during Saturday's "Washington Journal" on C-SPAN in a monologue that is likely to go viral throughout the Internet and possibly make the speaker America's next Joe the Plumber.

But that's only the tip of the iceberg, for Leah from New Hampshire's declaration about what's really going on in the country, Congress, the media, and at these town hall meetings perfectly encapsulated what most so-called journalists are either ignorantly missing or dishonestly ignoring (video and transcript below the fold, h/t Ed Morrissey via Bob Hicks):

LEAH IN MANCHESTER, NEW HAMPSHIRE: Hi, yeah, I just wanted to clarify a few things about these "manufactured, angered crowds." I've never been politically active in my life. I've never done anything like go to a protest ever. I started going to protests, these Tea Parties back on the Fourth of July, and the reason that you're seeing the numbers grow and swell and become bigger and bigger is not only because of the healthcare legislation, but like you said earlier, all these massive bills, thousands of pages long that are passed with almost no debate, no time for us to see what's in it, in direct controvertion (sp) of what was promised about transparency and a near era and we're going to know what we're doing in advance. I see, I see politicians admit on TV that they can't read it, that they can't understand it because of its complexity. Lawyers who are writing these bills say they need lawyers to tell them what's in the bill.

Now, when I watch the news people stand here and tell me that I am a member of a hired mob, that I've been called up by the Republican Party, they only wish they could have done something like this. I've never been contacted by any organized group. This is an organic movement, and when people stand there, and lie to me about what I know is going on, how can I trust them when they tell me it's going to save money when the Congressional Budget Office says it isn't? That it's going to cover everybody when the Congressional Budget Office says it isn't? That it's going to let me keep my, my healthcare when common sense tells you that's not what's going to be the end result of this when the government ends up providing all the healthcare which the man who wrote the bill in the beginning says. Go watch it, Jacob Hacker who wrote this says that in time, and President Obama said it, we will all be swallowed up in this government plan.

When people lie to us, we don't trust them when they give us platitudes about what's in the bill.

ROB HARRELL, C-SPAN "WASHINGTON JOURNAL" HOST: Leah, are you planning to, are there any town halls planned in your area, in your neck of the woods?

LEAH: No, my, my Congressmen are afraid. Now they won't even come out and meet us face-to-face. They want to do some phony telephone thing so that we can't judge their facial expressions. We can't say with a follow-up question, "I'm sorry, that didn't answer my question. Could you please?" You know, yes people are getting angry. That doesn't mean it's fake. That means it's real. And by the way, about the caller who says it's all racial, the only person I've seen that's been attacked, physically attacked, is a black man who was attacked by SEIU, and he says they were black. So, I'm getting tired of the race card. I'm getting tired of the lies. I'm getting tired of the media not telling us what's in these bills but giving us a bunch of "Republicans says this, Democrats say that." I don't care.

Exit question: Is Leah the next Joe the Plumber?