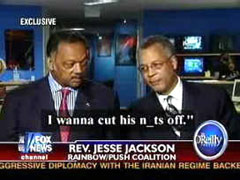 As media gasp over Rev. Jesse Jackson's indelicate remarks concerning presumptive Democrat presidential nominee Barack Obama's naughty bits, an interesting point was revealed at the Huffington Post: if this had been said about Vice President Cheney, the press would be laughing their heads off.

In the end, the disgust isn't about the language or the imagery; it's about the person it was directed at.

A couple months ago, I wrote a blog entry here at HuffPo that ended by calling for the public castration of Grover Norquist. The comments that the good readers of the HuffingtonPost left at that blog entry were strongly approving, especially of the final line. But why? Why such approbation for one castration, and not for the other? Two reasons. First, chopping off Grover Norquist's nutsack with a rusty meat clever is hilarious. Not so Barack Obama. Second -- and this is the part of Jackson's words that is horrifying from a political point of view -- Norquist is the enemy, at least to many of the readers of HuffPo and, natch, to me as well.

The truly unforgivable part of Rev. Jackson's words is not what he said, but whom he said it about. It proves, for what must be the 36,987th time at the very least, that Democrats have never taken to heart the reciprocal of Ronald Reagan's 11th Commandment: "Thou shalt not speak ill of a fellow Republican." Had Rev. Jackson said he wanted to cut the nuts off of Dick Cheney, we'd all be having a good laugh about it right now.

You're darned right, Dan. Thank you for pointing this hypocrisy out.