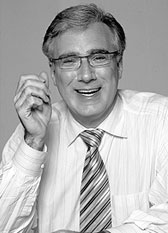 Chalk up another in a litany of absurd statements made by MSNBC's Keith Olbermann.

The entire disgraceful quote, offered as a teaser for the full interview at Playboy's website (be advised that pictures of scantily clad women exist on the page as well), was as follows (h/t Inside Cable News via Johnny Dollar):

Al Qaeda really hurt us, but not as much as Rupert Murdoch has hurt us, particularly in the case of Fox News. Fox News is worse than Al Qaeda - worse for our society. It's as dangerous as the Ku Klux Klan ever was.

Imagine that. And this guy has his own show on MSNBC which is being broadcast live before "Sunday Night Football" on NBC.

Giuliani tried to out-Bush Bush. He tried to get votes by talking about casualties as if another attack like 9/11 were inevitable, suggesting that voting for anyone but him would lead to more people getting killed. That's about an inch from saying, "If you don't vote for me, you'll die," which is another inch from saying, "If you don't vote for me, I'll kill you." And that, to me, is not America. In fact, it's not Earth. I don't usually single out candidates for praise or brickbats, but if they're going to politicize terror, to do the work of the terrorists by terrorizing the populace, I'll come down on them like a ton of bricks. That's my job.

That must be why Olbermann repeatedly denounces people like Al Gore who essentially say "If you don't believe in global warming you'll die."

Oh yeah, I forgot. Olbermann is a liar who only pretends to be non-partisan.

Post facto opinion by Noel Sheppard: An anchor for one of the leading television news networks in the world has stated that a competing network is worse than the world's leading terrorist organization responsible for the killing of thousands on September 11, 2001, and many others around the globe.

He's also stated that this news network is as dangerous as the most racist organization to ever exist in America.

Can anyone explain how this man can say these things and continue to represent MSNBC and NBC?