Media Owe Rove an Apology -- or at Least a Few Hugs 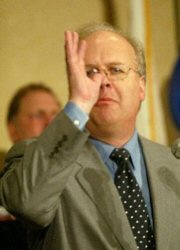 In America, people are innocent until proven guilty, unless of course they are Republican.

No finer example of such legal relativism has occurred in recent memory than the case of President Bush’s top advisor, Karl Rove. For months, virtually every mainstream media outlet proclaimed his guilt regarding the Valerie Plame Wilson affair, or what has been not so affectionately named the CIA-leak case.

Take for example the media’s excitement over pending indictments for Rove. This hit a fevered pitch last fall as Special Prosecutor Patrick Fitzgerald, after almost two years of research, depositions, and grand jury testimonies, was about to announce his findings on October 28.

Sadly for the drive-by media, no indictments were handed down for Rove that day.

As a result, restaurateurs and bar owners around the country were likely forced to give back millions of dollars in deposits for all the “Rove is Going to Jail” parties that ended up being cancelled by disappointed Democrats coast to coast.

However, hope – which some ironically claim springs eternal – reemerged in late April when Rove appeared in front of a grand jury for the fifth time to answer more of Fitzgerald’s questions. This re-ignited a media firestorm of enthusiasm over the ominous portent for such a visit, raising the possibility that Rove was once again in the prosecutor’s crosshairs, and that indictments were imminent.

Giddy Democrats around the country were again making party plans. One can only hope that restaurant and bar managers learned from their previous mistakes, and this time required deposits that were nonrefundable, for as reported by Byron York of the National Review, Rove’s attorney Robert Luskin released a statement on Tuesday indicating that there would be no joy in Demville tonight:

“On June 12, 2006, Special Counsel Patrick Fitzgerald formally advised us that he does not anticipate seeking charges against Karl Rove.

”In deference to the pending case, we will not make any further public statements about the subject matter of the investigation. We believe that the Special Counsel’s decision should put an end to the baseless speculation about Mr. Rove’s conduct.”

Imagine all the wasted confetti and cocktail wieners sitting unused in Democrat warehouses all around the country. This must be especially disheartening coming only days after the killing of al Qaeda leader Abu Musab al Zarqawi.

Yet, before we shed a tear for the grief liberals in America must be feeling, shouldn’t we instead be demanding a huge apology – if not at least a couple of hugs – from the drive-by media for their innocent victim?

Certainly, the first of such apologies should come from MSNBC, as no network focused more attention on the possibility of Rove being indicted since he was last questioned by Fitzgerald on April 26 than they. In fact, according to LexisNexis, MSNBC logged 34 separate reports on this subject since Rove’s last date with the prosecutor.

Without question the worst offender on MSNBC was correspondent David Shuster, who typically logs reports for Chris Matthews’ Hardball, though he is also a frequent guest of Keith Olbermann’s Countdown. In the weeks subsequent to April 26, Shuster seemed to make it a personal mission to attack Rove on virtually a daily basis. This crusade culminated on May 8 when, as reported by NewsBusters, Shuster predicted on Countdown that indictments were imminent:

“Karl Rove’s legal team has told me that they expect that a decision will come sometime in the next two weeks. And I am convinced that Karl Rove will, in fact, be indicted.”

Not so surprisingly, Shuster didn’t show his face on either of the two broadcasts of Hardball Tuesday. However, he was a guest on that evening’s Countdown, where, according to NewsBusters, he blamed his mistake on his legal sources:

“Well, sometimes when you’re trying to track a secret grand jury investigation, the legal sources, the defense lawyers who have witnesses in front of that grand jury, sometimes they get it wrong, and that seemed to be the case in this particular case.”

Nice out, David. Very crafty. Even better was how Shuster punctuated his statements of disavowal by suggesting that Fitzgerald would only indict Rove if he felt there was a 99 percent likelihood of winning if it went to trial.

I guess the special prosecutor that worked on this case for two and a half years wasn’t as convinced of Rove’s guilt as Shuster.

However, on a comical note, a competitor of MSNBC’s felt it was important to point out just how wrong Shuster was. NewsBusters reported on Tuesday that Jake Tapper, on ABC’s World News Tonight, after stating, “And some Democrats and some in the media wrongly predicted Rove would be next,” aired the May 8 videotape of Shuster claiming that Rove would be indicted.

You really can’t make this stuff up.

Yet, Shuster wasn’t the only MSNBCer actively seeking an indictment for Rove. In fact, the person who first offered up Bush’s advisor as a target of Fitzgerald’s was none other than MSNBC’s senior political analyst Lawrence O’Donnell who in July 2005 said on The McLaughlin Group that Rove was the source that Time magazine’s Matt Cooper was protecting. Subsequent to that broadcast, O’Donnell wrote twelve pieces for the Huffington Post dealing with the possibility of Rove being indicted.

We can only hope that McLaughlin has O’Donnell on as his guest this Friday evening so that the rest of the gang – conspicuously absent Newsweek’s Eleanor Clift who likely is in mourning over this announcement – can help Larry remove all the egg from his face.

Another MSNBCer who should apologize to Rove is Chris Matthews, whose Hardball program prominently featured discussions about pending indictments for Bush’s closest advisor on fifteen shows since April 26. The best of these discussions involving Matthews actually occurred on the May 14 installment of the syndicated Sunday show bearing his name. Matthews began the program:

“First up, desperate White House. Karl Rove is in the sights of special prosecutor Patrick Fitzgerald and that threatens President Bush himself.”

As the discussion ensued, Matthews eagerly asked the following of Newsweek’s Howard Fineman:

“Howard, let me ask you about the Fitzgerald thing right now. The—nobody knows what’s going on but everybody’s buzzing in Washington. Is this guy going to get indicted?”

After the group chatted about this a bit, the following exchange transpired between Matthews and Fineman:

MATTHEWS: I would expect your paper and your paper will have huge booming headlines if this guy gets indicated.

MATTHEWS: Your magazine will put him on the cover probably, right?

Don’t bet the ranch on Newsweek making Rove’s exoneration a cover story this Monday. Nor should you make such a wager concerning Matthews admitting he was wrong.

Quite the contrary, on Tuesday’s Hardball, Matthews appeared incredulous concerning the lack of an indictment, and focused attention on why the President should act on Rove even if the special prosecutor found no cause. He posed this to Sen. Joe Biden (D-Delaware):

“We know that Karl Rove will not be criminally charged, but we do know that he leaked twice to Matt Cooper and to Bob Novak. Is this the end it, since he’s not going to be indicted, we don’t hear another word about this case? Is he just he’s free to walk and serve in the White House?”

“Well, you know very well, Chris, that I’ve had had some reservations about his opposition to things on occasion. But I think that we’ve been through this now, he’s not indicted, his position has been changed, he’s not trying to set policy now. He’s back over in a political advisory position, and I think that’s where he ought to stay.”

Makes you wonder what Matthews doesn’t understand about how the legal system in our country works, doesn’t it? Or, is Chris just having a hard time hiding his disappointment?

Regardless, another network that owes Rove an apology is CNN, and especially Jack Cafferty who has logged numerous reports antagonistic to the president’s chief advisor. In particular, as reported by NewsBusters, Cafferty on October 17’s The Situation Room stated:

“According to our colleagues over there at Time magazine, if Rove is indicted in the CIA leak case he would immediately resign or possibly go on unpaid leave.”

Cafferty’s e-mail question for viewers that evening was:

“What should Karl Rove do if he is indicted?”

More recently on the May 16 installment of The Situation Room, Cafferty stated much the same as Shuster eight days prior:

“Nevertheless, rumors continue to swirl around that an indictment or Mr. Rove is imminent.”

Cafferty is conveniently off this week. Could he have gotten a tip about Fitzgerald’s announcement?

In the end, it is highly doubtful that any of these networks or their representatives will actually acknowledge getting this story wrong, or apologize for impugning the character of one of America’s most important political figures this decade. Instead, they are likely to take the Matthews approach, and continue to focus on guilt that a special prosecutor couldn’t find after two and a half years of trying. Or, they’ll luck out like Cafferty and not have to face the music at all.

One can only hope that Americans will take heed of what has transpired in the past three years since Bob Novak’s now-infamous column revealed Plame’s name, and recognize that as much as they might distrust politicians, the media are to be held in even lower esteem.

Of course, most polls already suggest such a condition exists. What a shock.