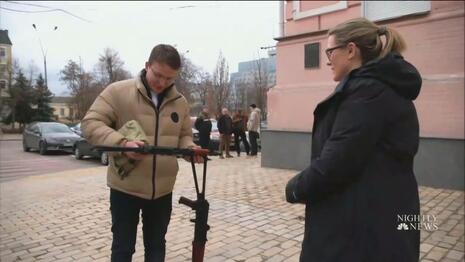 On Wednesday, hours before the start of the Russian invasion of Ukrainian, the Rada (parliament) advanced legislation that would allow more Ukrainian civilians to own firearms as they stared down the bear that was eager to wage war on and conquer them. It’s another obvious example of why civilian firearm ownership is important and vital for a free people, yet it wasn’t worth any airtime on the broadcast networks (ABC, CBS, and NBC) that night or Thursday.

Citing local Ukrainian reporting, The Reload’s Stephen Gutowski reported: “274 of the country’s 450 elected representatives voted for the bill, according to local media outlet Ukrinform. The bill would formalize the country’s gun laws, allow more civilians to own and carry guns, and allow them to be used for self-defense in more places.”

The Canada-based CTV noted the move came on the eve of, “[o]ne of Europe's worst security crises in decades” after “Russian President Vladimir Putin recognized two areas of eastern Ukraine as independent and ordered troops to be deployed to eastern Ukraine.”

“The country is not new to organizing civilians into effective fighting forces,” Gutowski added. “Volunteers have been fighting against Russian-backed separatists in the now-occupied eastern provinces since shortly after the puppet government was thrown out during a popular uprising. The government is now organizing these efforts into Territorial Defense Forces administrated by the military.”

In his analysis of the law and what it could mean for gun rights in Ukraine, The Reload’s Anthony Constantini noticed that “the US gun-rights movement may have indirectly inspired” the direction the law took.

“Most importantly, however, the law codifies the right to use deadly force in defense of life, health, or property. The Chairman of the Rada, Ruslan Stefanchuk, made clear to Ukrainian News that this bill was designed with one key goal in mind: ‘to ensure that every citizen receives the sacred right to self-defense,’” he wrote.

Constantini also pointed out that the law is “a mixed bag” because “Ukraine is determined to join the European Union” and they have certain requirements on firearms for member states:

That changed with this new law, though a closer look seemingly does not give pro-gun Americans much to celebrate. It mandates licensing and state-run classes and reinforces an already existent national gun registry. Class A (fully automatic) weapons are banned for civilian possession, and Class C (rifled short-barreled) weapons are de facto banned, with ownership restricted to sportsmen. Class B (smoothbore short-barreled) weapons are legal but restricted to those who partake in dangerous professions (though the list is rather broad, including occupations like judges and journalists). However, those who possess Class B weapons can carry them on their person.

“However, even with these flaws, I would argue that this is an incredibly important law that gun-rights enthusiasts should celebrate,” he surmised.

But there could still be some good news for gun rights in Ukraine and Europe!

“Should the Ukrainians mount an effective resistance against a likely Russian occupation, expansions of the draft law is sure to follow” and “an expansion of gun rights may not be confined to Ukraine,” as very anti-Russian states like Poland see the appeal of being able to repel aggression from their hyper-hostile regional neighbor.

Now, during the first day of the invasion, Fox News Pentagon correspondent Lucas Tomlinson reports that the Ukraine government has handed out 10,000 rifles to civilians to help defend the capital, Kyiv.

On that distribution of weapons, Gutowski notes “half a million Ukrainians have fighting experience and could form the basis of long-term resistance to Russian occupation” and “Ukrainian leaders have maintained they would fiercely resist an invasion by whatever means necessary.”

NBC Nightly News did note this distribution of weapons but not the expansion of gun rights on Thursday. Yet reporter Erin McLaughlin spoke with a member of the Ukrainian parliament who’s never shot a weapon before but was among those ready to take up arms:

MCLAUGHLIN: At the national police headquarters, a line of people waiting to be handed weapons. The government encouraging all Ukrainians to take up arms and fight. This man leaves with two AK-47s, even though he never fired a gun. [TO VASYLOVYCH] Do you know how to use that?

MOVCHAN OLEKSII VASYLOVYCH: To tell the truth, I am not really, but I understand. I just need to find some quiet place and figure out how it works.

The network blackout on the importance of gun rights to protect your country was made possible because of lucrative sponsorships WeatherTech on ABC, Prevagen on CBS, and Angi on NBC. Their contact information is linked.