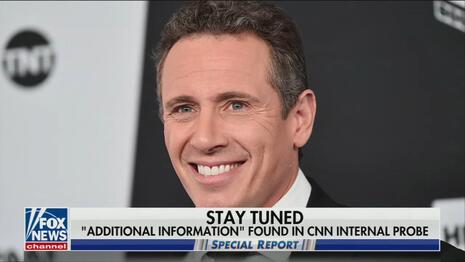 In an apparent attempt to get the rest of his contract money, disgraced former CNN loudmouth and host Chris “Fredo” Cuomo plans to sue the network for over $18 million after they fired him on Saturday, according to a New York Post exclusive published Monday. This now pits CNN boss Jeff Zucker against a bitter Cuomo possibly looking to rhetorically blow up the network that touted him as one of their stars just a couple of weeks ago.

“Fired CNN host Chris Cuomo is set to sue the network if it balks at paying him at least $18 million to cover what’s left on his contract, sources told The Post on Monday,” wrote Emily Smith and Bruce Golding.

Adding: “Cuomo, 51, has hired lawyers and is preparing to file the lawsuit over the remainder of the four-year contract he signed last year — after a bitter back-and-forth about what the network knew of his secret efforts to aid his embattled brother, then-Gov. Andrew Cuomo, said sources familiar with the matter.”

The paper also had sources inside CNN who told them the network has “no intention of paying Cuomo a penny” and “If he gets a settlement, there would be [an] uproar” internally.

CNN seemed to have the leg-up in the pending legal dispute because of wording in the contract (Click “expand”):

Another source said, “CNN has a standard morality clause in their contract that says if the employee does anything of disrepute, they can be immediately fired.”

Lawyers from the white-shoe firm of Cravath, Swaine & Moore told CNN that the documents gave the network legal grounds to fire the “Cuomo Prime Time” star for contacting “sources” about planned news reports regarding his brother, as well as trying to dig up dirt on at least one of Andrew’s accusers, sources said.

The Post also reported that $18 million was the base number as it could be as high as $20 million, plus “damages.” The scorned Cuomo brother even had his knives out for the very man to “protected” him and his journalistic misconduct for months: Zucker.

In their original indefinite suspension of Fredo, CNN hinted that he had been lying to them about how deep his involvement was in protection his brother, disgraced former New York Governor Andrew Cuomo (D), actually was.

But in a text message to Wall Street Journal reporters Benjamin Mullin and Joe Flint, a spokesperson for Fredo claims Zucker knew everything. “They were widely known to be extremely close and in regular contact, including about the details of Mr. Cuomo’s support for his brother. There were no secrets about this, as other individuals besides Mr. Cuomo can attest,” the message said.

In addition to Cuomo’s feud with CNN, he announced on Twitter that he was quitting his SiriusXM radio show “Let’s Get After It” on the POTUS Politics station (or so he claims). After ditching his Monday show, he announced in a tweet that he would be leaving to “focus” on his family:

The way my time ended at CNN was hard. While I have a thick skin, I also have a family, for whom the past week has been extraordinarily difficult. So, right now, I have to take a step back and focus on what comes next. That means I will no longer be doing my SiriusXM radio show.

Did he ever stop and consider that the victims of his and his brother’s sexual misconduct have families too? Unlikely.

He also hinted that he was going to try to make a comeback at some point:

I am extremely grateful for the support I have received from SiriusXM throughout my time there. I also want to express my sincere appreciation from my loyal listeners. I will miss our conversations a great deal – but I look forward to being back in touch with you all in the future.

But while Fredo was acting like it was his call to leave SiriusXM, Smith, Golding, and Carl Campanile at The Post had sources inside the satellite broadcaster that said otherwise. “A source familiar with the matter said of Cuomo, ‘He was asked to resign, which he did,’” they wrote.

If he was that close with Zucker, as he claims, he might know where all of CNN's rhetorical bodies are buried. This could be only the beginning of Cuomo's revenge tour.