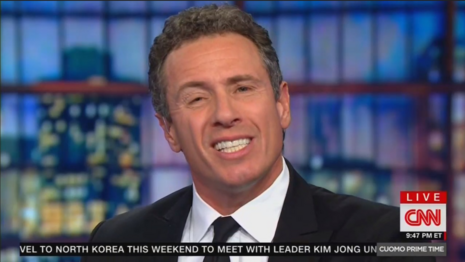 Early Tuesday night and following a year-plus of bipartisan pressure, CNN finally felt sufficiently embarrassed and pulled the plug on Prime Time host Chris Cuomo by suspending him indefinitely for having abused his resources as the journalist to openly (and privately) colluded on political strategy with his brother, scandal-ridden former Governor Andrew Cuomo (D-NY).

The suspension came just over 24 hours after the New York attorney general’s office released a trove of documents from the sexual misconduct investigation of disgraced former governor Andrew Cuomo, exposed the depths in which the CNN anchor worked to assist in a smear campaign against his brother's accusers.

“When Chris admitted to us that he had offered advice to his brother’s staff, he broke our rules and we acknowledged that publicly,” the network said in a statement put out by media journalist, Cuomo apologist, and company man Brian Stelter. “However, these documents point to a greater level of involvement in his brother’s efforts than we previously knew.”

Over at The New York Times, reporters Michael M. Grynbaum and John Koblin wrote that “[t]he star CNN anchor Chris Cuomo was suspended indefinitely by the network on Tuesday in the wake of new details about his efforts to assist his brother, Andrew M. Cuomo, the former governor of New York, amid a cascade of sexual harassment accusations that led to the governor’s resignation.”

As NewsBusters previously reported back in August, Chris had lied to his viewers about his role in crafting his brother’s public responses to the allegations against him. “I'm not an advisor,” he said at the time. “I wasn't in control of anything. I was there to listen and offer my take and my advice to my brother was simple and consistent.”

At the time, we knew he was not just “there to listen” as e-mails proved he was drafting up public statements for his brother. But with the release of more investigative documents on Monday, we see him working hand-in-hand with top aide Melissa DeRosa.

“Please let me help with the prep,” he told her in a text message. Later adding: “You need to trust me” when things were unraveling. He even was leaning on his sources to get dirt on at least one of his brother’s accusers and to probe rival outlets to see what stories they were writing about Andrew’s accusers.

Not only was Chris lying to his viewers about his role in helping Andrew, but, as we saw the network allege, he apparently kept CNN in the dark as well.

Many thought CNN was going let it go, just like they did back in August. He even hosted his show like normal on Monday. So, perhaps his status as CNN poster boy wasn’t enough to save his job.

But Chris seemed to be hanging on by a hair. “As a result, we have suspended Chris indefinitely, pending further evaluation,” the network concluded. The network did bring back Jeffrey Toobin after all.