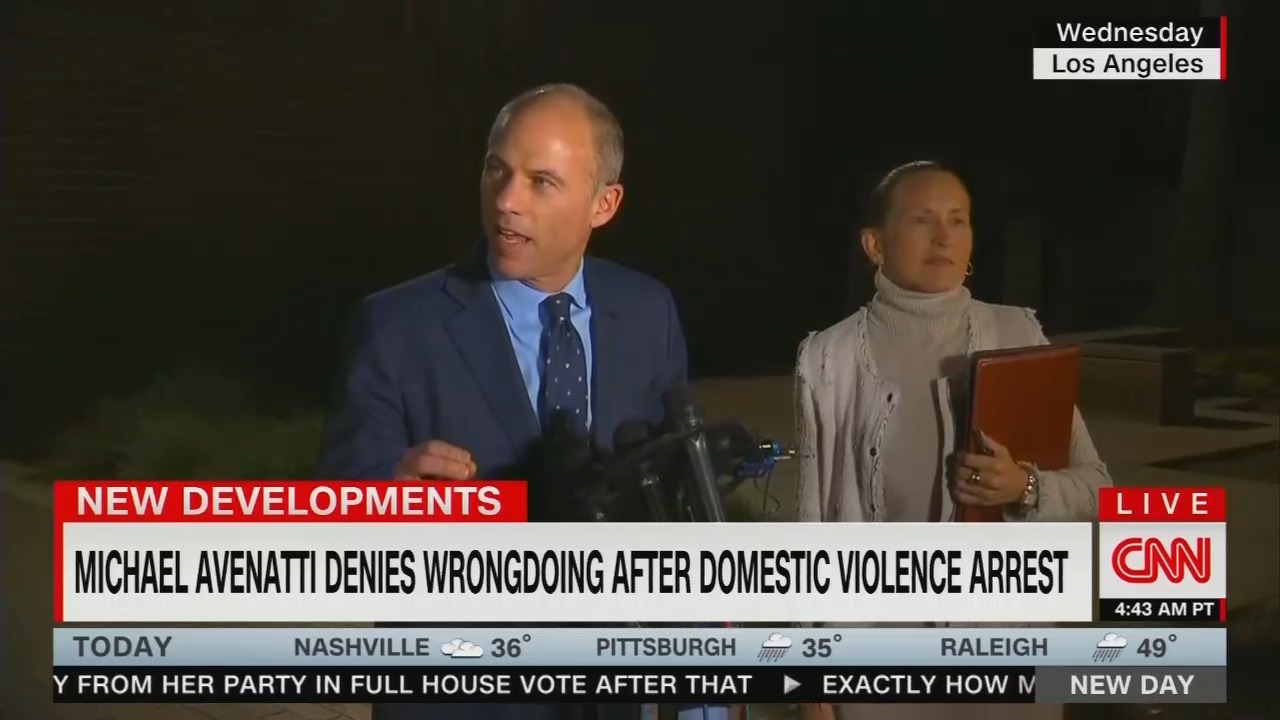 After being arrested on felony domestic violence charges last week, there was a new chapter in the saga of Michael Avenatti’s alleged abuse late Monday night when news broke that New York actress Mareli Miniutti had filed a domestic violence restraining order against him. Both CNN and MSNBC couldn’t be bothered to mention the development on air that night.

According to celebrity news site The Blast, which broke the story, “court records” show 20-year-old “actress Mareli Miniutti filed for a domestic violence restraining order against Avenatti Monday in Los Angeles … A hearing on the restraining order has been set for next month.” Avenatti is 47-years-old.

As TMZ first reported last week of the felony domestic violence charges, the alleged victim’s “face was ‘swollen and bruised’ with ‘red marks’ on both cheeks. “We're told Wednesday afternoon the woman was on the sidewalk on her cellphone with sunglasses covering her eyes, sobbing and screaming on the phone, ‘I can't believe you did this to me. I'm going to get a restraining order against you,’” TMZ added.

The Blast piece was published at 8:17 p.m. Eastern Time and by midnight, neither CNN nor MSNBC had done a segment, news brief, or any mention of the filing. At 11:00 p.m. Eastern CNN began re-airing their prime time line up and MSNBC did the same starting at midnight.

After first downplaying the arrest and felony domestic violence charges against the Democratic lawyer and 2020 hopeful last week, and skimping on coverage thereafter, both CNN and MSNBC ignored Miniutti’s restraining order filing.

Instead, they chose to suddenly be outraged by the use of private E-Mail by government officials after it was discovered Ivanka Trump was using one. They were also obsessed with President Trump’s feud with former Navy SEAL commander William McRaven. The pair also aided in Democratic Party attempts to delegitimize the results of Georgia’s gubernatorial race by pushing unsubstantiated claims of voter suppression.

This was the first time we were able to put a face to the original felony domestic violence charges. Prior to Monday, it was thought that Avenatti’s ex-wife was the one who made the claims. She denied it was her and praised her former husband as a non-violence person, much to the relief of the liberal media who touted her defense.

Following the publishing of The Blast report, Avenatti posted another tweet denouncing the charges and proclaiming his innocence:

I look forward to a full clearing of my name and disclosure of all of the facts. I have NEVER abused a woman or committed domestic violence against anyone. Any claim to the contrary is completely bogus and fabricated. I am a target. And I will be exonerated.

CNN’s and MSNBC’s refusal to cover Avenatti’s controversies came after he gave them over 200 combined interviews where they gave him free rein to trash Trump and the Republican Party with impunity. It also came after they used his client Julie Swetnick to smear Justice Brett Kavanaugh with false claims he took part in gang rapes in high school. Both Avenatti and his client have been referred to the FBI for a criminal investigation.