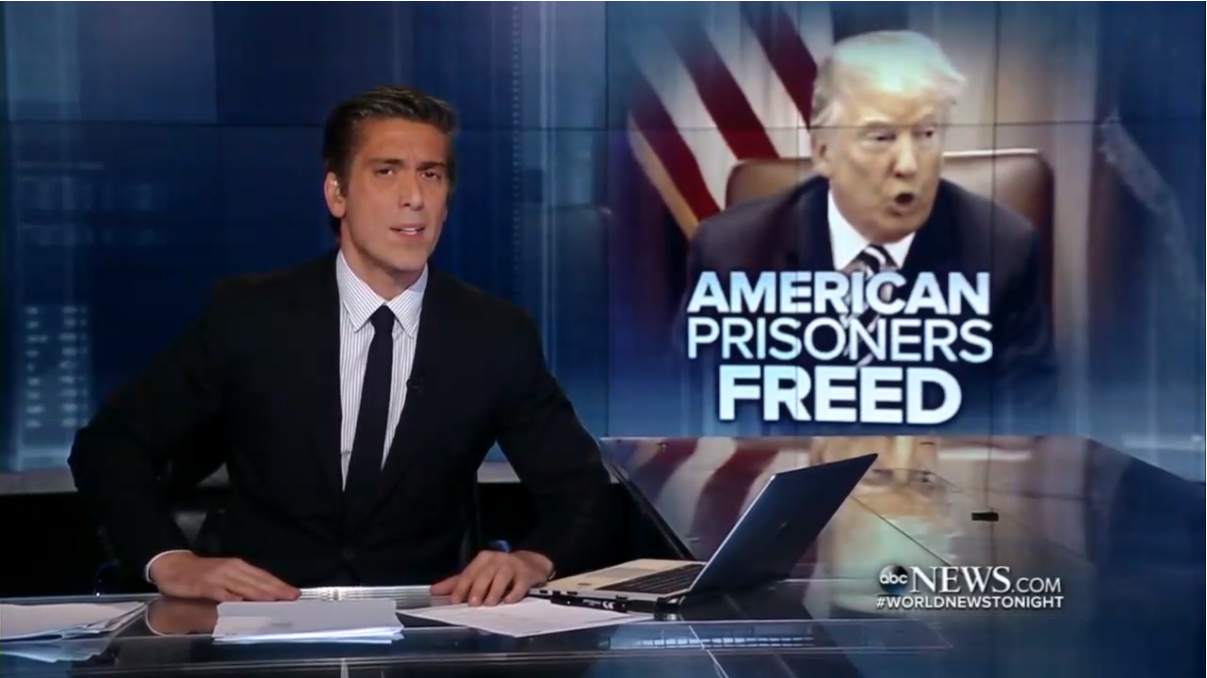 There was great news out of the Korean Peninsula Wednesday as Secretary of State Mike Pompeo retrieved the three Americans that North Korea arrested on trumped up charges going as far back as 2015. The North Korean regime released the hostages from their labor camps as a good faith measure ahead of the historic summit with the United States. Despite the wonderful news, ABC felt the need to rain on everyone’s parade and bring up the anti-American backlash from Iran over the Iran deal.

From the get-go, ABC was looking to crackdown on the joy of the hostage release. While they kicked off World News Tonight with coverage of the hostages, they mixed the story with that of the Iran nuclear deal. “President Trump says he plans to be there when they arrive at Andrews Air Force base at 2:00 in the morning. Just as Iran tonight sends the President its own message, after he tore up the nuclear deal,” announced anchor David Muir.

When it came down to the time allowed for each topic in the report, the hostage release did get the most, but just barely. Between Muir’s introduction and White House correspondent Jon Karl’s report, they allowed one minute and 51 seconds for the hostages and the summit while giving Iran deal backlash one minute and 21 seconds.

“But even as he pursues one nuclear deal, he is facing global blowback for pulling out of another. In Iran today, anti-American protests, including the burning of American flags and photos of President Trump,” Karl said as he transitioned away from the positive news. He even quoted “lawmakers there” who were “questioning the President's, quote, ‘mental capacity.’”

But Karl didn’t dare quote them chanting “death to America” or report that they had burned an American flag on the floor of their legislature.

After the prerecorded report ended, Muir questioned Karl about how North Korea inspections would work when they weren’t enough to keep Trump in the Iran deal, never mind the ridiculous sunset clause or announced inspections. Karl couldn’t see Trump’s plan for North Korea working out at all, despite how the Iran deal allowed them to build nukes in a few years.

In sharp contrast, NBC Nightly News actually went out and interviewed a family member of one of the hostages that were finally coming home. “The family of Tony Kim, held for more than a year, thanking the President for engaging directly with North Korea and Sun Soul Kim telling NBC News his anxious to reunite with his father,” reported White House correspondent Peter Alexander.

“I don’t know what I would do. I don't know if I'll cry or jump up and down. I don't know will I faint because I missed him so much,” Sun Soul Kim told Alexander.

The release of the American hostages was a time for joy and celebration, but ABC just wanted to be downers.

The relevant portions of the transcript below, click "expand" to read:

DAVID MUIR: Three Americans held hostage in North Korea are on their way home right now. President Trump first tweeting that they were on their way. It comes ahead of his face-to-face with Kim Jong-un. The three men flying out with Secretary of State Mike Pompeo. President Trump says he plans to be there when they arrive at Andrews Air Force base at 2:00 in the morning. Just as Iran tonight sends the President its own message, after he tore up the nuclear deal. ABC's chief White House correspondent Jonathan Karl leading us off.

JON KARL: The President made the announcement himself, calling the release of the American prisoners an important moment for the country.

KARL: Secretary of State Mike Pompeo traveled to North Korea to secure their release, meeting for a second time with Kim Jong-un. The three former prisoners are Korean-American. Two of them detained last year, the third imprisoned since 2015.

KARL: The President is now focused on meeting Kim himself.

KARL: The location still a mystery. Kim seldom travels. Though North Korea today released this picture of the North Korean dictator on his plane in China. The President is already envisioning making history.

KARL: But even as he pursues one nuclear deal, he is facing global blowback for pulling out of another. In Iran today, anti-American protests, including the burning of American flags and photos of President Trump. Lawmakers there are questioning the President's, quote, “mental capacity,” and threatening to restart its nuclear program.

MUIR: So, let's get to Jon Karl live at the White House tonight. And Jon, Iran had agreed to what international observers had called the most robust nuclear inspections. As we all know now, that wasn't enough to keep President Trump in the agreement. We also know North Korea already has nuclear weapons. Jon, you and I have talked about this. Will Kim Jong-un agree to inspections anywhere close to what Iran was already allowing?

KARL: It’s uncertain David. North Korea has cut itself off from almost all of the outside world for more than a half a century. It is hard to imagine that such an isolated and secretive regime would suddenly open itself up, including its most sensitive military facilities, but the White House insists that any deal with North Korea will be fully verifiable, and that would mean inspections beyond anything we have ever seen in North Korea.