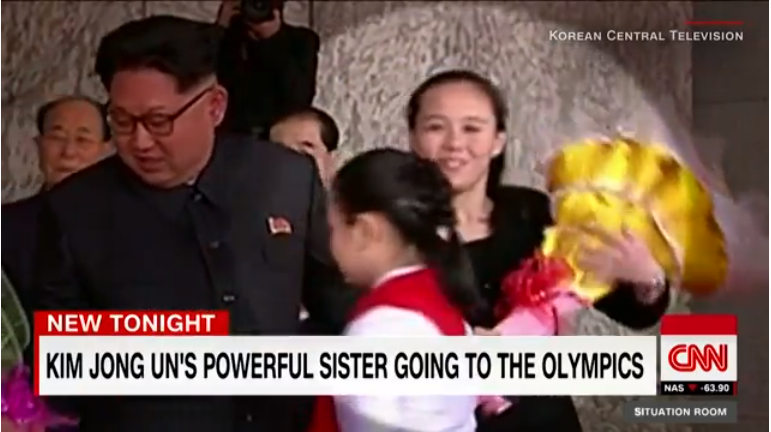 In a disgustingly gushy puff piece published Saturday on CNN.com, reporters Joe Sterling, Sheena McKenzie, and Brian Todd put Kim Yo-jong, the sister of murderous dictator Kim Jong-un, on the gold medalist tier for her appearance at the Winter Olympics in South Korea. “If ‘diplomatic dance’ were an event at the Winter Olympics, Kim Jong-un's younger sister would be favored to win gold,” the three declared in the first sentence of the article, which headlined the website for a time.

“With a smile, a handshake and a warm message in South Korea's presidential guest book, Kim Yo-jong has struck a chord with the public just one day into the Pyeongchang Games,” they continued to tout. Kim also heads the North Korean Propaganda and Agitation Department, which is responsible for censorship, something you would think the outlet that pompously shouts "#FactsFirst" would care about.

They kept the negative coverage and criticism to an absolute minimum as they hyped her role in her brother’s government and the “buzz” she caused in the media. “In Pyeongchang, her presence is a major storyline for reporters and the buzz on the street, with some in South Korea curious and accepting, while others are skeptical, if not downright cynical,” they wrote.

CNN quoted two South Koreans who didn’t like that Kim was in their country, but their opinions were already discredited by the journalists who chiding them as just being “downright cynical.” This dissent was immediately followed up by the reporters boasting of Kim’s diplomatic visit:

It wasn't until this week that the world learned Kim Yo Jong would join her nation's Olympic delegation. Just a few days later, she is the face of North Korea at Pyeongchang.

The first member of the North's ruling dynasty to visit the South since the Korean War ended in an armistice in 1953, Kim on Saturday made headlines across the globe when she delivered an invitation to South Korean President Moon Jae-in to visit North Korea. It happened during a historic meeting between North and South Korean officials at Seoul's presidential palace.

It’s unclear if it was supposed to be a way to glorify Kim or a way to smear President Trump’s daughter, but the trio wrote extensively on how Kim was seen as “North Korea’s Ivanka Trump.” “Seen by some as her brother's answer to American first daughter Ivanka Trump, Kim, 30, is not only a powerful member of Kim Jong-un's kitchen cabinet but also a foil to the perception of North Korea as antiquated and militaristic,” they opined.

“Experts say her visit for the Winter Games is calculated to answer the expected presence of Ivanka Trump at the closing ceremonies,” the CNN reporters fawned. “‘Kim Yo-jong is the perfect counterpart to this,’ Hwang said. ‘And it also is a signal that North Korea is not this crazy, weird former Cold War state -- but it too has young women that are capable and are the future leadership.’”

In contrast to CNN’s dismissive handling of average South Korean dissenters, they highlighted praise from a “South Korean public servant” who told them just want they wanted to hear: “[It’s a] great lesson for my children. They learned that winning is not everything and that you can get more cheers for trying to overcome differences.”

The CNN reporters even drew attention to what Kim was wearing during a diplomatic dinner following the joint Korean hockey team’s 8-0 loss to the Swiss team: “At a dinner at a hotel in Gangneung, the sub-host city of the Olympics, Kim Yo Jong was ‘wearing a wine-colored jacket and black pants,’ South Korea's Yonhap News Agency reported.”

This obnoxious glorification can after CNN spent the previous few days comparing President Trump to Kim’s dictator brother for wanting a military parade.