Joe Scarborough may not have been on Friday’s Morning Joe, because his band was performing at SXSW but that didn’t stop the liberal bias from flowing. Everything from Republican Party bashing to Hillary Clinton-praising was out on display going into the weekend. 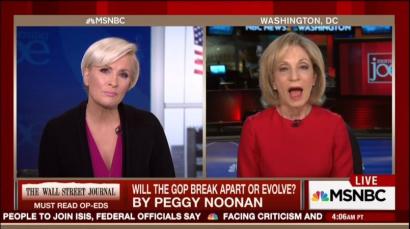 “This buffoonery is at a level that I think the latest poll on the Republican party as far as just -- as a brand, it is an all time -- I can't remember the number but it's a stunning low.” Said Donny Deutsch, of Republicans for not meeting with Judge Merrick Garland. Deutsch continued, “The fact that they won't even walk into a room is appalling, is disgusting, and is pathetic.”

“How low can these guys go at this point?” He asked of retiring Democratic Representative Steve Israel. “I've been asking myself that question for years. And they keep find a way to go lower. I agree with you completely.” Israel responded, “Their brand is toxic.”

Washington Examiner contributor Lisa Boothe quickly put Deutsch in his place by reminding Deutsch that a “majority of Americans and voters think [Hillary’s] a liar.” Boothe pointed out that, in New Hampshire, over 90 percent of voters who had “trust” as a major issue sided with Bernie Sanders. While only 6 percent sided with Hillary.

Former Obama Car Czar Steve Rattner also go in on the Republican bashing fun. He argued that the reason Donald Trump is on the rise is because Republicans stood against President Obama saying:

“The Republicans to some degree create their own problem … But the Republicans for the last seven years have basically blocked any kind of policy action, any kind of initiative, many of which Obama has proposed that would have made the lives better for these people who are now very unhappy.”

Rattner continued by arguing the consequences of Republican actions have “boomeranged back around” and they are now paying for it.

MSNBC host Andrea Mitchell joined the show during the beginning of the second hour. While on the show she bemoaned how Hillary was not polling well with “angry white men.” She said that many of the white men that voted for her in 2008 were “resentful” for losing their jobs. Mitchell also hinted that the white men were racist because they voted “against Barack Obama,” because of what she described as “complicated reasons.”

Joe Scarborough may not have been hosting the show Friday but it sure was still a steaming cup of liberal bias.

WILLIE GEIST: What's the impact in reality, though, putting up a tariff like that and make-- 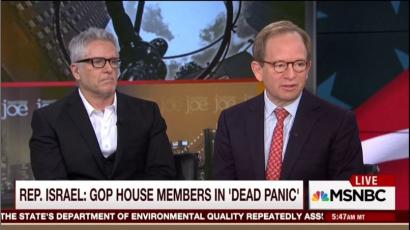 RATTNER: No. But the Republicans for the last seven years have basically blocked any kind of policy action, any kind of initiative, many of which Obama has proposed that would have made the lives better for these people who are now very unhappy. So it's kind of boomeranged back around.

NICOLLE WALLACE: But the failure isn't a policy failure, the failure is the Republicans don't have an eloquent rational relatable advocates for free trade so the party is sort of devoid of people who can talk about how trade benefits your life. You know, everyone can have those products that were on your list because of trade. There are no— There are no advocates and, frankly, if it's Hillary versus Trump there will be no debate about the benefits of trade.

RATTNER: Because no—I would slightly disagree. I think there-- I don't think you can sell the benefits of free trade right now when you have so many individuals and so many key states who are hurting. I think what we should have done—

WALLACE: But it's pandering to their fears. There are benefits of free trade. And the Republicans-- This is part of the crackup of the Republican Party. It no longer has a candidate in convention who's an advocate for free trade.

MIKA BRZEZINSKI: Well Andrea Mitchell, I think that and trade and certain other kind of I think moments in our history, in terms of where the people are, might lead Trump to everything that he needs to win this.

ANDREA MITCHELL: I think there is a big crossover vote, I agree absolutely with Howard Dean. The fact is that Hillary Clinton is not winning white men and, you know, she won them 2008 because she was running, let's face it, against Barack Obama.

So a lot of the angry white men, some of whom are economically disadvantaged and have lost jobs and are resentful, they were voting for Hillary Clinton for complicated reasons. Those people are not with her so far in these primaries and for most of the primaries she's losing the white men. And losing them to Bernie Sanders who's appealing to them on those very economic issues of trade that you speak of. And there's also the celebrity factor.

And I don't think we should discount that. There's social media, there’s—I mean which is completely different just since four years ago to say nothing of eight years ago in terms of its expansion and penetration. But also the fact that celebrity, television, whatever you want to call it is a much bigger deal and that Donald Trump has completely dominated all forms of media.

DONNY DEUTSCH: I’ll give you the answer, why not Cruz? He's completely unelectable in the general election.

MIKA BRZEZINSKI: Well I was wonder what she felt. I mean I know you feel that way.

DEUTSCH: Completely unelectable. Do you agree with that? He's completely -- no matter how you slice and dice, Ted Cruz. You may like or not like Donald Trump but, you know he could strike fire and lightning in a general election. Ted Cruz is unelectable and I think that's the reason they don't go to him.

LISA BOOTHE: Well, I would argue that I think Hillary Clinton is going to have some problems, too. I mean, just the fact that she—

BOOTHE: Okay, I’ll give you that—Well potentially, we'll see. I mean look, She's having -- The fact she even has a race against a 74-year-old self-avowed socialist and she's losing millennials by 80 percent and 85 percent in some these contests. Or the fact she's doing so poorly among white men or the fact that, you know, you’re seeing the majority of Americans and voters think she's a liar. Or even among Democrats voters, you look at a contest like New Hampshire and the voters that trust is an issue for them and a prominent issue for them in their decision making, they went to Bernie 96—92 percent to 6 percent.

DONNY DEUTSCH: We were talking off camera and Mr. Ratner said they were just in -- and I agree with you, a lose-lose-lose position, no matter which way they turn.  And they now all of a sudden you put the hearings on top of it.

just -- as a brand, it is an all time -- I can't remember the number but it's a stunning low. And if you're an American and you watch this and here, by the way, Obama has intelligently put a very, very, very credible candidate on the table and the fact that they won't even walk into a room is appalling, is disgusting, and is pathetic. And just-- How low can these guys go at this point? And I think that’s the question.

REP. STEVE ISRAEL: Donnie, I've been asking myself that question for years. And they keep find a way to go lower. I agree with you completely. Their brand is toxic. And you know where I hear this? In the most honest places on Capitol Hill, the members’ only elevators where members speak honestly because there's no press, you guys aren't allowed in.

And you know what I hear from Republican House members across the country? They're in a dead panic. They realize their brand is in trouble. And now having Donald Trump exemplify that brand at the top of their ticket hurts them. And I’m not going to say puts the House in play, but it absolutely expands the battlefield. They are in a dead panic.