MSNBC anchor Mark Halperin likely surprised his viewers, Monday, by declaring that some of the sexual accusations against Bill Clinton have been “confirmed and acknowledged” by the former President. Halperin appeared on Morning Joe with host Joe Scarborough and former Democratic Congressman Harold Ford.

Ford sounded defensive, saying that Bill Clinton's relationships with Gennifer Flowers and Monica Lewinsky were consensual, and pointed out that Hillary Clinton's comments were about sexual assault. To that, Scarborough hit back with Juanita Broaddrick and Kathleen Willey's accusations.

Halperin built off of Scarborough, saying that both Broaddrick and Willey have not been debunked by evidence.  Halperin declared, “In the two cases you just cited..... I don't know that anybody's disproven the allegations of those two women.”

JOE SCARBOROUGH: Hey Mark, I want you to weigh in. Mark Halperin lets go to you, weigh in on the back and forth Harold and I had on Hillary Clinton. Of course, the Times saying that Bill Clinton’s actives are not relevant anymore, but Hillary Clinton ever held account for her part of the process. And by the way, I hope whatever you're eating is good. Whatever it is, it is chewy. Go ahead. 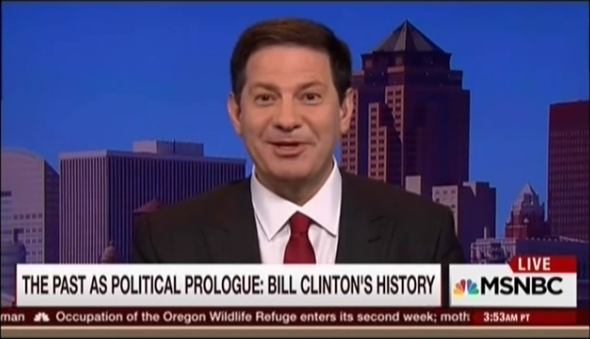 MARK HALPERIN: Well, Harold said that Hillary Clinton said that people have a right to be heard until their allegations are disproven. And I think that in some of the most prominent cases not only were the accusations not disproven but they were confirmed and acknowledged by President Clinton.

HALPERIN: So, I think-- well, he acknowledged he had a relationship with Gennifer Flowers, he paid Paula Jones off in a settlement and has acknowledged much of what Monica says happened. So those are three prominent examples.

HAROLD FORD JR.: Those are consensual, I’m just only saying. I'm not defending it but you were talking about, I think he was talking about, Joe, Mrs. Clinton.

SCARBOROUGH:  If you're a 52-year-old president of the United States, Harold, and you’re having an affair with a 22-year-old intern, is that defined as consensual in 2016?

FORD: I'm not defending, but what she was talking about sexual assault cases. At least that’s what I read, how I interpreted where she was.  I'm not defending what this-- what the president did.

SCARBOROUGH: I’m just asking man. You need to calm down.

FORD: I'm making it clear she was talking about sexual assault cases.

NICOLE WALLACE: Juanita Broderick is the sexual assault case that the press usually talks about when they talk about all these cases.

MIKA BRZEZINSKI: Joining us now a member of the House committee on oversight—

HALPRIN: In the two cases you just sited, again, to go to Harold’s question of whether Secretary Clinton’s—what she said about people get to be heard before their disproven. I don't know that anybody's disproven the allegations of those two women.

SCARBOROUGH: No one ever has.

FORD: Again I’m not defending it. I’m only saying what the woman said and where things stand.