Brent Bozell: Afghanistan Is Such a Disaster, Even Biden’s Media Hacks Can’t Save Him 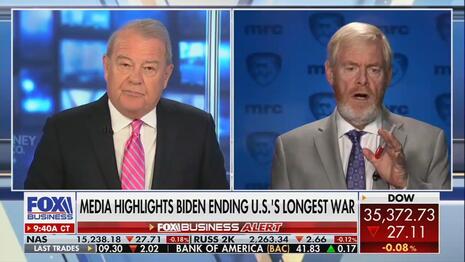 Media Research Center President Brent Bozell on Tuesday concluded that the absolute disaster in Afghanistan is so terrible, even Joe Biden’s reliable chorus in the press can’t salvage it. Appearing on Fox Business’s Varney and Co., he predicted that they would try (and fail) to save Biden’s reputation.

Bozell explained, “When the media, which are Biden's strongest level of support, when the media crack in their support, then you know there is something serious [going on].” He added, “It is not just the fact that they have evacuated and therefore... it's a humiliating capitulation. No, we've got hundreds of Americans that are left there and each one is going to become a story.”

After noting that journalists like NBC’s Richard Engel are calling Afghanistan the “worst capitulation of western values in our lifetimes,” the MRC president concluded, “You know there is something wrong.”

Citing the Americans left behind, as well as our weapons and technology, Bozell predicted, “This one is far from over. This problem for Biden is far from over. Many in the media will try, but fail ultimately.”

A transcript of the Varney and Co. segment is below. Click “expand” to read more.

STUART VARNEY: The media is spinning the botched Afghan withdrawal in a very positive way. Look at the headlines. They're highlighting how President Biden ended America's longest war. Brent Bozell, media watcher, is with us this morning. Do you think Americans are actually buying that spin?

BRENT BOZELL: No. They're not and you know, they're not. That spin is there. But there is also very much a negative spin going on from Biden from some reporters, Stuart, just can't avoid what is going on. Look, when the media, which are Biden's strongest level of support, when the media crack in their support, then you know there is something serious. And there are serious reporters that have seriously broken from this administration. This administration's political wheels have come off as a result.

When Richard Engel of NBC calls it “the worst capitulation of western values ever,” you know there is something wrong. But Stuart, here is something else. I think this story is far from over. It is not just the fact that they have evacuated and therefore the, you know, it's a humiliating capitulation. No, we've got hundreds of Americans that are left there and each one is going to become a story, the Taliban will make sure. Each one is a story. Then, the Government Accountability Office, I saw this number, I don't know if you saw this, Stuart. They project that we have left thousands of trucks and Humvees there, we have left 368,000 weapons in the hands of the Taliban. You think they will put them in a garage or are they going to have some offensive capability now? This one is far from over. This problem for Biden is far from over. Many in the media will try but fail ultimately.

VARNEY: You're right. The problem is, for President Biden and his leadership. I just saw a banner on CNN. It was a CNN headline. It describes the “messy retreat” from Afghanistan, that is their word, messy. But raising questions about Biden's leadership. That is CNN. That surprised me, the story that keeps running here is the President's competence. That is not going to go away.

BOZELL: That's right. Two points on that. One, there are few emotions as powerful as humiliation. America feels humiliated, this should never have happened. So, the American people can listen to all the spin in the world. They're not going to buy it. Secondly, look at the problem that Biden has now. Whenever a president has a huge political problems, you and I know this, Stuart, the solution is always to go overseas to do an overseas trip. That is the last place Joe Biden can go now. They can put him in the basement like they did before. This time events will take place that they are not going to be able to control with all that weaponry. Let’s admit it: They're hostages now. We now have hostages in Afghanistan because the Taliban will do whatever they want.

VARNEY: Do you think President Biden will take questions when he addresses the nation at 2:45 this afternoon? I don't know, is it address the nation? It's a statement. You think he takes questions?

BOZELL: If he does, here we go again. This should outrage every reporter for him to say that he has been instructed, and he calls on people in advance, every reporter who is interested in a free and fair exchange between journalists and political figures should be outraged at how controlled this is. If he takes questions. It will be just that way. I suspect he will do what he is doing, walk offstage.

VARNEY: All right, Brent Bozell. We will all be watching. Very important day. Brent, thanks for joining us. We’ll see you again soon.