Flashback: How the Networks Twisted the 1991 Thomas-Hill Hearings

It’s not as if we haven’t seen this before. Twenty-seven years ago, a last-minute accusation of sexual harassment prompted the Senate to re-open Supreme Court nominee Clarence Thomas’s confirmation hearings; the ‘he-said, she-said’ confrontation was a media spectacle, including prime-time coverage on the broadcast networks.

When it was over, the Media Research Center analyzed the coverage, and found journalists criticized Republicans for being too harsh on Anita Hill, while criticizing Democrats for being too soft on Thomas. Here is that study, as originally published in the November 1991 edition of the MRC’s MediaWatch newsletter: 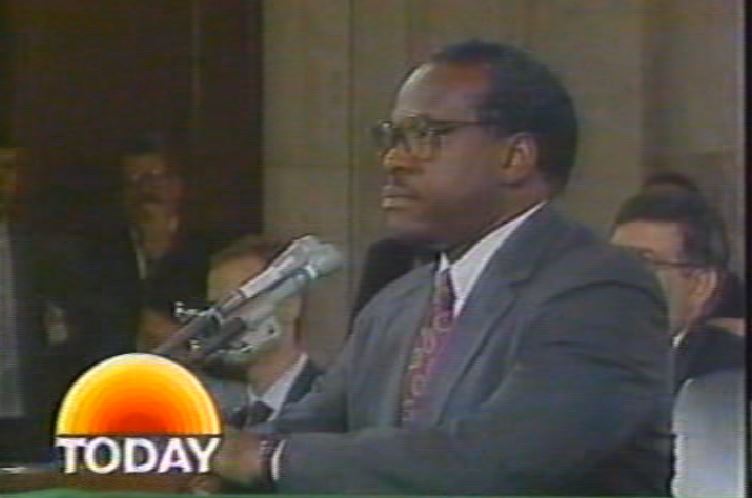 Just when Judge Clarence Thomas looked to be a shoo-in for Senate confirmation, someone with the Senate Judiciary Committee leaked an affidavit from Anita Hill charging Thomas with sexual harassment. If, as suspected, Democrats did the leaking, it could clearly be characterized as hardball politics or playing dirty.

But when network television covered the hearings live over the Columbus Day weekend, Democrats were not subjected to tough questioning about their possible role in the leak, or how committing this crime was a new low in playing dirty. Instead, reporters accused the Republican committee members of playing hardball politics, while criticizing the Democrats for not being tough enough on Thomas, a MediaWatch Study has documented.

The study covered all ABC, CBS and NBC news broadcasts (both live coverage and normal shows) between the start of the hearings at 10 AM EDT on Friday, October 11 through the Wednesday, October 16 morning programs. The study also covered all CNN and PBS live coverage, plus CNN’s World News. The amount of time devoted to live coverage varied: CNN and PBS showed it all while CBS, which cut out for baseball Friday night and for football on Saturday and Sunday, offered the least.

In total, the five networks’ anchors, reporters and affiliated analysts singled out the Republicans for cynical or hardball tactics on 28 separate occasions. On another twelve occasions, the network personalities complained that committee Democrats went too easy on Thomas. (On two occasions, CBS vaguely blamed both parties, calling the hearings “smear and counter-smear,” for example.) No anchor or reporter deplored the likelihood that the Democrats leaked in an effort to stop Thomas at all costs. In fact, they praised leaks (despite the damage they may cause) as an “all-American institution,” in the words of PBS anchor Paul Duke.

During a break in the hearings on October 12, Dan Rather asked: “Would you agree, or would you not agree, that one person’s leak is another person’s public service?” On the same day, Nina Totenberg insisted that “the history books are full of important and historic events that were the result of news leaks.... [Watergate] would have just been a third-rate robbery if there hadn’t been a lot of leaks disclosing what it had all been about. So, news leaks — I don’t want to be defensive about this — but news leaks aren’t always bad.”

When Senator Paul Simon appeared on Meet the Press October 13, reporter Andrea Mitchell went on the attack, but not about the leak: “Now you just mentioned that Anita Hill was under attack for most of yesterday and you lamented that. But it was the Democrats who failed to question Judge Thomas very aggressively about some issues that might have been relevant. For instance, pornography. One of his friends from Yale, Lovida Coleman, a very close friend, has said that he liked to tell stories about pornographic films....Why was that question not asked?”

During an October 14 Today roundtable discussion, NBC News Washington Bureau Chief Tim Russert exemplified the attack on Republicans: “You had Senators accusing people of perjury; Senator Simpson, ‘I have faxes, I have letters’ — the closest thing to McCarthy that we’ve seen. It was not a kinder, gentler Republican panel.” On Today the next morning, Andrea Mitchell complained about Thomas: “The Democrats did not ask him tough questions about the facts of her charge and they did, the Republicans did a great job of hammering her. It’s basically what happened in the ’88 campaign. The Republicans know how to fight dirty.”

With the exception of two occasions on Nightline, ABC refrained from making such judgments in all of its hearings coverage. Ted Koppel mouthed the media line on October 15: “The reality that Judge Thomas is tonight Justice Thomas can be attributed in large measure to the fact that his supporters used some hardball tactics of their own.” In contrast, Koppel asserted the Democrats “were largely ineffectual counter-punchers.”

At this point, we don't know whether or not there will actually be hearings featuring Brett Kavanaugh and his accuser, Christine Blasey Ford. But if there are, you can bet the media will build them up into a spectacle — and their spin might be very reminiscent of their approach in 1991.