Bozell Condemns Journalists for Celebrating Trump Assassination Play: ‘Where Is the Shame?’

Brent Bozell on Tuesday condemned journalists for excusing and celebrating a play in New York that features the mock assassination of Donald Trump. The MRC President appeared on Fox Business and responded to the fact that CNN’s Fareed Zakaria called the play, in which a Trump lookalike is stabbed to death, “brilliant” and a “masterpiece.”

As a warning for anyone who doesn’t understand the gravity of the media’s aim when it comes to Trump, Bozell declared, “Look for it to get worse.” He added, “They're nonstop out to get Donald Trump. Don't anyone question that.”

This New York City play has the sponsorhip of the New York Times and CNN's parent company, Time Warner. For more, see the June 10 column by Bozell and Tim Graham. 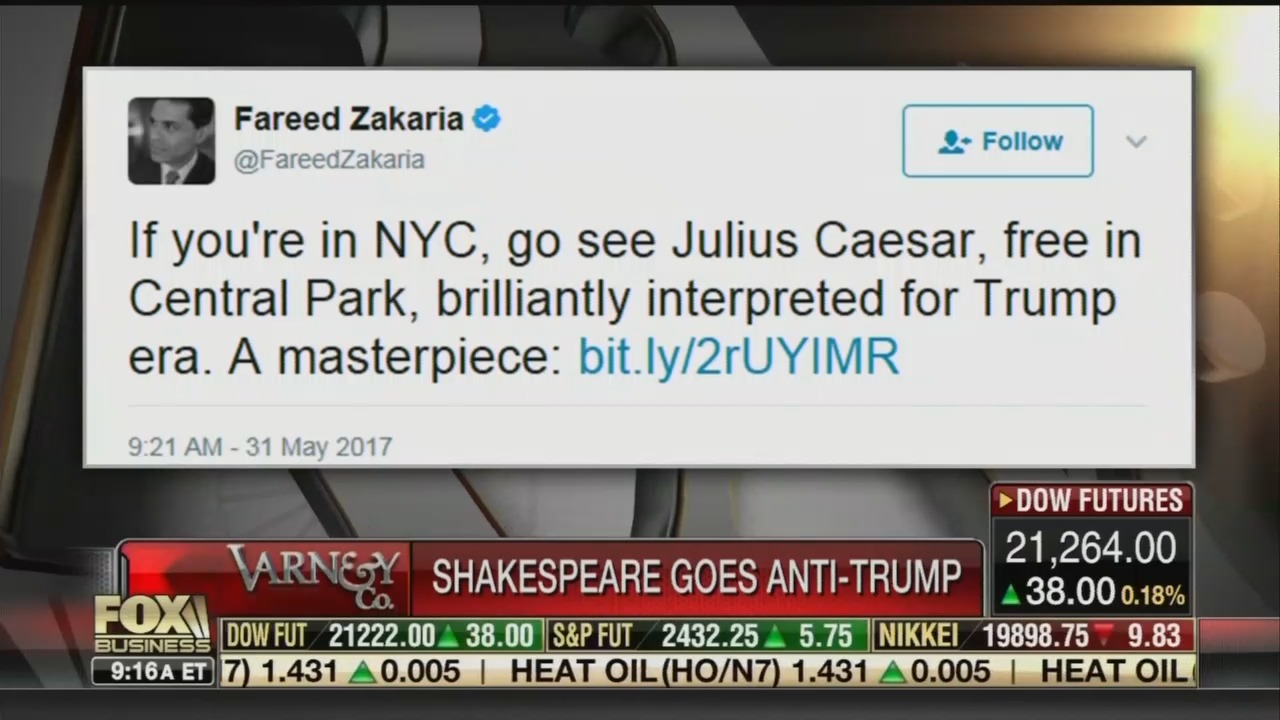 STUART VARNEY: To the media. Shakespeare in the park in New York caught a lot of heat after showing a Trump lookalike being stabbed to death. Now, we learn CNN's Fareed Zakaria had already weighed in on the production. Here’s what he said he said if you're in New York City go see Julius Caesar free in Central Park, brilliantly interpreted for the Trump era. A masterpiece. Look who is here. Brent Bozell with the Media Research Center. You know, the New York Times has not withdrawn its sponsorship of Shakespeare in the Park and CNN's parent, Time Warner, has done the same. They're not withdrawing their support. What do you make of this? 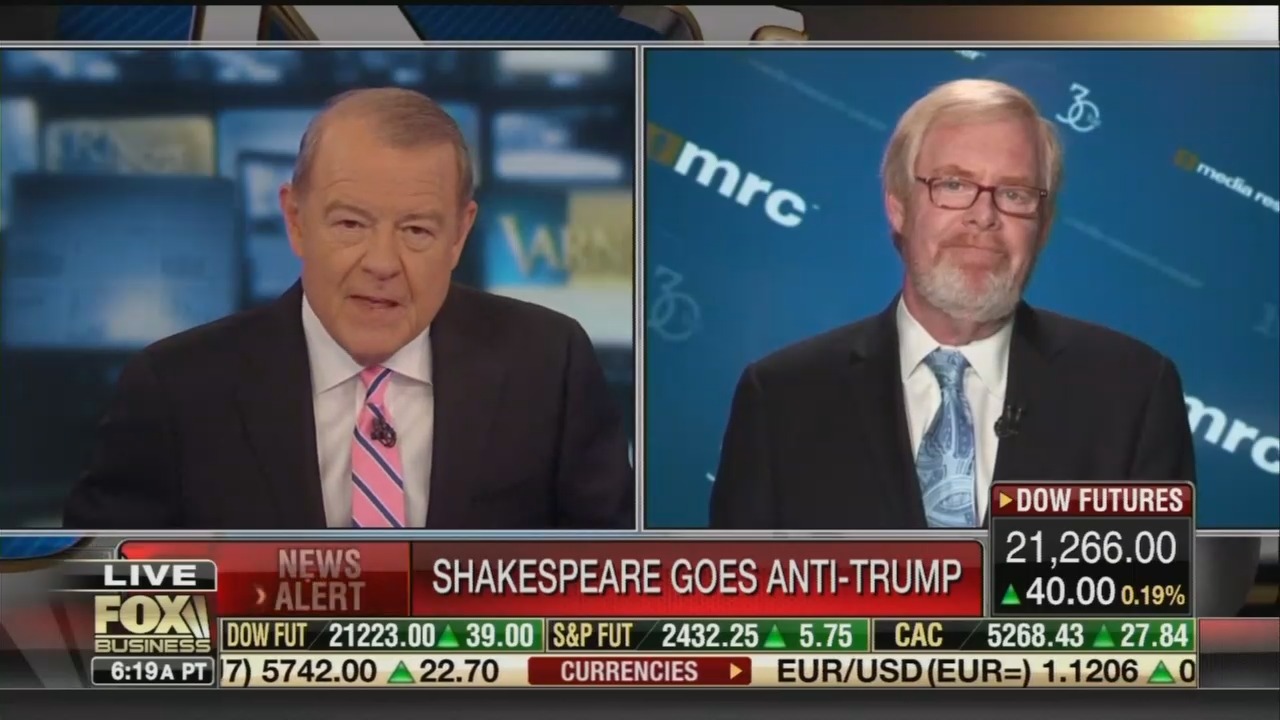 BRENT BOZELL: You know, sir, we've talked many times, well, if it were the Obama administration, how would they react? In fact, my colleague Rich Noyes found something interesting: Four years ago at Missouri state fair, there was a clown wearing an Obama mask. This is what the announcer said, he said, “This bull is going to get you, Obama, he's going to get you!” That comment alone triggered national news stories, including a major story by NBC News. That was out of bounds. But just imagine a play depicting the United States stabbing to death Donald Trump. The New York Times, Time Warner, by the way, the city of New York, they are sponsoring it.

VARNEY: Where it the sense of responsibility on the part of these media people? 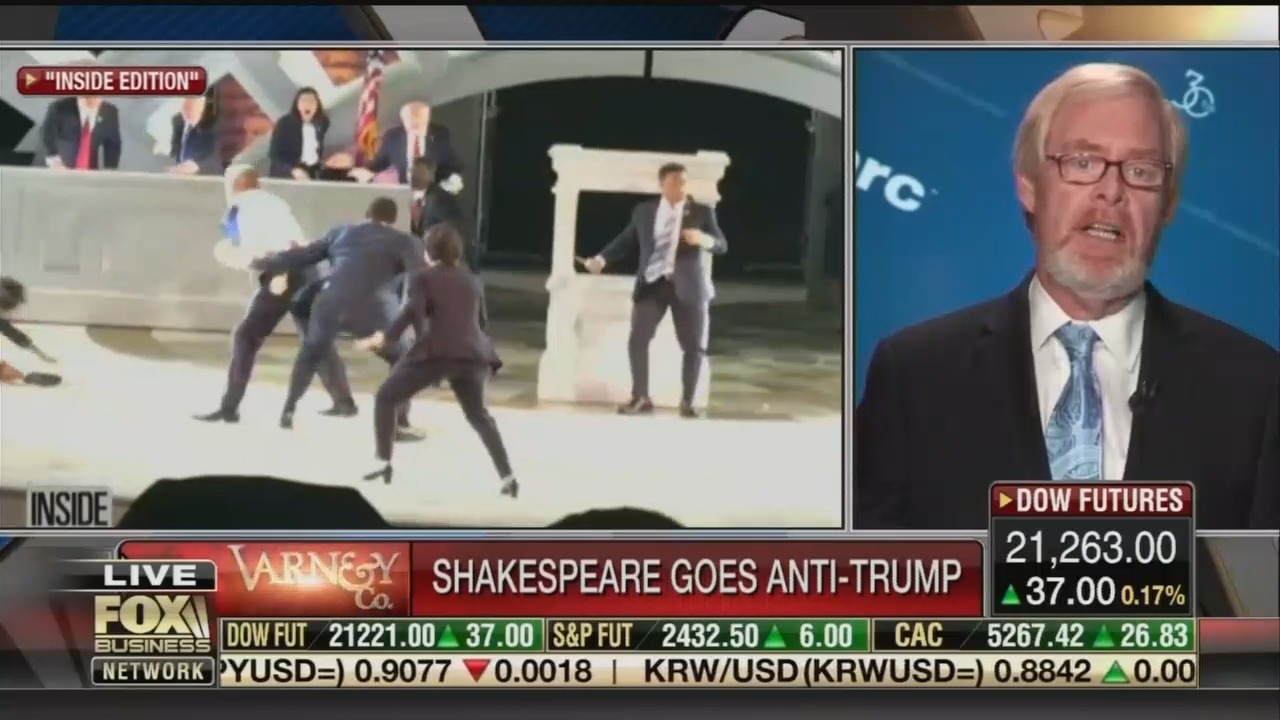 VARNEY: That's the story of the day.

BOZELL: Where is the coverage of that? CBS gave it 60 seconds.

VARNEY: Is there any sense — I just want to know, I've got 30 seconds left, is there any sense on are the part of the media people, maybe we've gone too far, we're acting irresponsible, time to rein it in a little? Any sense of that at all?

BOZELL: None whatsoever. Look for it to get worse. Look for them — They're interrupting the programming today for the Sessions hearing, the Sessions testimony. They're nonstop out to get Donald Trump. Don't anyone question that.